On 20 April 2010, the left wing of an Antonov Design Bureau An124-100 which was taxiing in to park after a night landing at Zaragoza under marshalling guidance was in collision with two successive lighting towers on the apron. Both towers and the left wingtip of the aircraft were damaged. The subsequent investigation attributed the collision to allocation of an unsuitable stand and lack of appropriate guidance markings.

On 20 April 2010, an Antonov An124 being operated by the Antonov Design Bureau on a cargo flight from Kiev to Zaragoza was taxiing in to park in normal visibility after a night landing at destination under marshalling guidance when it was in collision with two successive lighting towers on the apron. Both towers and the left wingtip of the aircraft were damaged.

An Investigation was carried out by the CIAAIC. It was found that the aircraft type involved was known in advance to exceed the dimensions of the available parking stands at the airport, so it had been assigned to two adjacent parking stands which had previously been used by Boeing 747 aircraft.

It was found that when the aircraft reached the apron, the crew had observed the marshaller exit the ‘Follow Me’ vehicle ahead of the aircraft and begin to give signals to approach the far left of the apron as a prelude to reaching a final parking position. In the absence of any taxi lines in that area, the Investigation noted that “neither the crew nor the marshaller knew for sure what path the aircraft had to take”. It was further noted that the marshaller who was described as “highly experienced”, had previously guided other large aircraft with generally similar dimensions to the An 124 such as the Boeing 747 and was using the same references that he might have used for those aircraft. However, it was considered that as the Antonov 124-100 has a 9 metre greater wingspan than the Boeing 747, use of those references might have been inappropriate. Given the fact that it was dark, the effects of both the apron lighting and the aircraft taxi lights were considered to have been potentially complicating factors once marshalling was under way. It was also considered that it was not appropriate to attempt to guide an aircraft with the 73.3 metre wingspan of the aircraft involved without also using an additional marshaller to directly confirm critical wingtip clearances such as that attempted in this case. 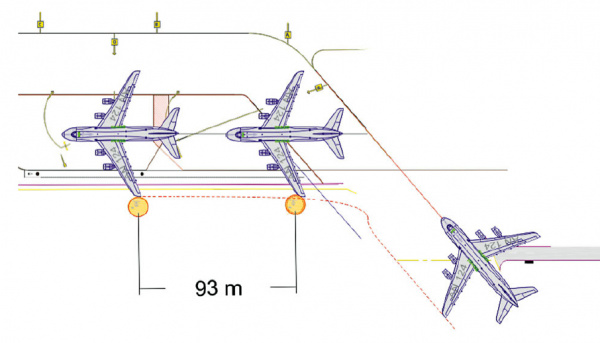 The path taken by the aircraft to the parking stand

Despite the overall responsibility of the aircraft commander for the safety of the aircraft even when under marshalling guidance, the Investigation noted that “the crew of the aircraft (involved) cannot discern the lateral clearance with obstacles, and the collisions that occurred were of insufficient magnitude to clearly alert the crew". 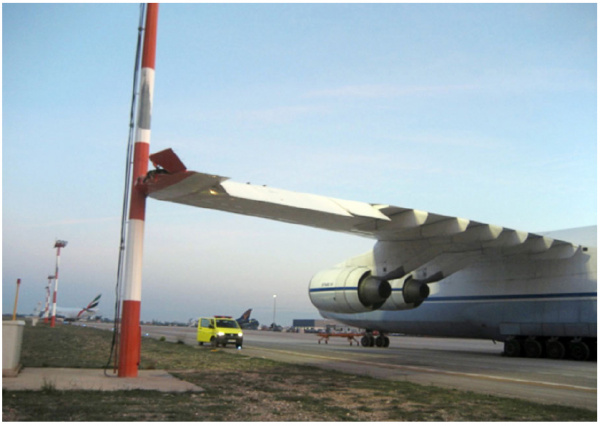 The Investigation concluded that the Cause of the collision was “an attempt to park an aircraft at an assigned stand that was unsuitable given the aircraft’s dimensions, and that did not have guidance markings.”

The Final Report IN-008/2010 was approved on 28 June 2012 and an English language version subsequently made available.