On 5 June 2014, an AW139 about to depart from its Ottawa home base on a positioning flight exceeded its clearance limit and began to hover taxi towards the main runway as an A300 was about to touch down on it. The TWR controller immediately instructed the helicopter to stop which it did, just clear of the runway. The A300 reached taxi speed just prior to the intersection. The Investigation attributed the error to a combination of distraction and expectancy and noted that the AW139 pilot had not checked actual or imminent runway occupancy prior to passing his clearance limit.

On 5 June 2014, an Augusta AW139 (C-GYNM) being operated by Ornge Rotor Wing on a positioning Medevac flight from Ottawa to Pembroke ON as LF4 began to hover taxi beyond the runway 25 holding point towards the runway at the same time as an Airbus A300-600 (N748FD) being operated by Federal Express on a flight from Mirabel (Montreal) to Ottawa was about to land on the other end of the same runway in day Visual Meteorological Conditions (VMC). The TWR Controller saw the incursion and instructed the AW139 to stop. By the time it did this, the A300 was just under 800 metres away and by the time it reached the intersection involved, it was at taxi speed and waited until the AW139 had returned to the holding point before continuing to clear the runway.

An Investigation was carried out by the Canadian TSB. ASDE was used as the primary source of recorded factual data relating to the event.

It was noted that the helicopter had been operated by two pilots, both Captains certified on type. The more experienced of the two (5600 hours total flying including 700 hours on type) was designated as aircraft commander and acting as PF on the investigated flight. The Co-pilot had approximately 4500 total flying hours which included 440 hours on type.

It was established that the AW139 had transferred from GND to TWR frequency during its hover-taxi along taxiway Echo (see diagram below) to its clearance limit, the hold-short-of-runway position prior to runway 25. Prior to the change to TWR, the A300 had received its landing clearance. On checking in with TWR, the AW139 was given an amendment to its IFR departure clearance, which the PM asked to be repeated. Then, "upon reception and read back of the amended IFR clearance, the PNF realised that the PF had begun taxiing across the hold short line" and upon observing this, the TWR controller told the crew to "hold short and stop". The A300 crew heard someone being told to stop whilst they were in the flare to touchdown but as the runway remained clear, they continued the landing on the 2440 metre-long runway 25 and did not sight the helicopter until they reached taxi speed approximately 70 metres from the compromised intersection. As stopped, the helicopter had passed through much of the 90 metre long part of taxiway Echo between the holding point and the actual runway but remained "just adjacent to it". 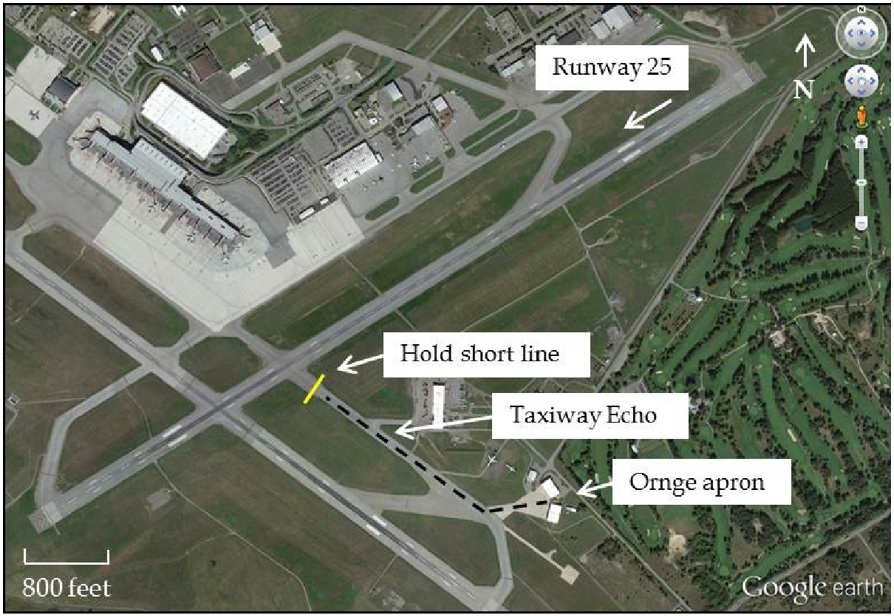 The Investigation noted the familiarity of the AW139 PF with operations out of Ottawa over a 15 year period and considered that "expectancy can also be greater after a long experience of a consistent circumstance, without an appreciation that the current situation is different". It was considered that the issue of an amendment to the departure clearance which includes a heading instruction "may contribute to a pilot’s expectation that a take-off clearance would follow a heading change instruction" and it was noted that the PF had already crossed the holding line whilst the clearance amendment was still being received. It was also considered that the action of the PF (as required by Ornge Rotor Wing Standard Operating Procedures (SOPs)) in re-setting the heading bug to match the heading required by the revised departure clearance could be seen as a distraction. However, it was also noted that "the PF had failed to follow SOPs which required that "before taxiing on to a runway or helicopter landing area, the PF shall visually check that there are no arriving or departing aircraft that may cause conflict, instructing the PNF to check the other side of the aircraft if necessary.”

A minor but possibly relevant use of non-standard phraseology by the TWR controller when prefacing his departure clearance amendment to the AW139 with "while we wait" was noted as introducing the possibility of confusion with the standard expression "line up and wait".

The formally documented Findings of the Investigation were as follows:

The Final Report of the Investigation was authorised for release on 10 June 2015 and released on 15 July 2015. No Safety Recommendations were made.