On 3 July 2010, an AW139 helicopter was climbing through 350 feet over Victoria Harbour Hong Kong just after takeoff when the tail rotor detached. A transition to autorotation was accomplished and a controlled ditching followed. All occupants were rescued but some sustained minor injuries. The failure was attributed entirely to manufacturing defects but no corrective manufacturer or regulatory action was taken until two similar accidents had occurred in Qatar (non-fatal) and Brazil (fatal) the following year and two interim Safety Recommendations were issued from this Investigation after which a comprehensive review of the manufacturing process led to numerous changes.

On 3 July 2010, an Agusta Westland AW 139 (B-MHJ) being operated by East Asia Airlines, on a scheduled Visual Flight Rules (VFR) passenger flight (EA206A) from Hong Kong to Macao was climbing through approximately 350 feet amsl over Victoria Harbour in day Visual Meteorological Conditions (VMC) two minutes after take off when the tail rotor assembly fell off. The crew declared a MAYDAY and accomplished a successful ditching. Three of the 11 passengers sustained minor injuries, the others and the two pilots were uninjured. 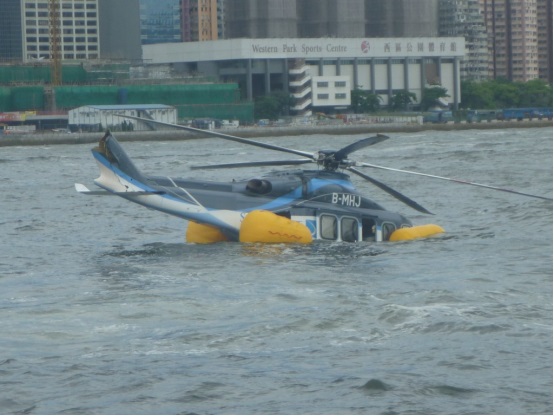 The helicopter floating in Victoria Harbour (Reproduced from the Official Report)

It was noted that the two pilots both held ATPL(H) licences issued by the Civil Aviation Authority of the Macao SAR and had considerable helicopter experience although relatively little of this had been on the AW139, the 45 year old commander, who had been PF for the accident flight, having only 377 hours on type.

It was established that passing 350 feet, both pilots had heard "a loud bang" from the rear of the helicopter after which airframe vibration had occurred. The commander simultaneously found that he had no authority on the pedal controls and deduced that the tail rotor of the helicopter had failed. He immediately put the helicopter into autorotation and instructed the First officer to shut down both engines. A MAYDAY call was made on the Company frequency and a controlled ditching was achieved in a level attitude with a low forward speed at touchdown. On contact with the water, all four emergency floatation bags inflated automatically.

The helicopter initially remained floating in a slightly nose down attitude and both pilots exited the flight deck via the emergency exit windows on their respective external doors. The commander then opened the right side passenger door from the outside and both pilots assisted all the passengers to evacuate from the helicopter. Everyone was rescued from the water "within minutes of the accident" by the first two vessels on the scene, a nearby fishing boat and a commercial harbour pilot boat. All the passengers were taken to hospital for medical examination and six were then admitted to be treated for minor injuries such as bruising or dizziness before being discharged later the same day.

It was concluded that the evacuation had been "conducted in a timely manner without delay, allowing all the passengers to evacuate from the helicopter before it capsized" which occurred about 18 minutes after the ditching, a time confirmed to be compatible with certification requirements. The capsize was due to the failure of the right forward floatation bag. The buoyancy provided by the partially-deflated left forward floatation bag was sufficient to ensure that the overturned helicopter remained in a floating condition. It was concluded that it was the slightly out of balance condition of the helicopter on the water caused by the weight of the missing tail that had resulted in overload and damage to the two forward floatation bags.

It was noted that since the flight between Hong Kong and Macao on which the accident helicopter was used did not go more than 10 minutes flying time from land at normal cruise speed, the carriage of life jackets was not required under the prevailing regulations. It was observed that these regulations were in line with ICAO Annex 6 Part III as effective at the time. However, the Operator had chosen to equip the helicopter with both crew and passenger life jackets sufficient for the maximum occupancy of 14.

It was noted that the AW139 tail rotor had four glass-fibre composite blades designated in sequence in the direction of rotation as the Red, White, Blue and Yellow blades. Each of these blades was connected to the tail rotor hub via a spherical elastomeric bearing. The pitch of the tail rotor blades was adjusted through a linkage attached to a pitch control arm bonded to the root of each blade. An elastomeric bearing was used to transmit loads between the hub and each blade whilst providing some freedom for the blade to move in flap, in lead-lag, in pitch or any combination thereof. Blade damper attachment lugs allowed dampers to each blade. These features are shown in the diagram below. 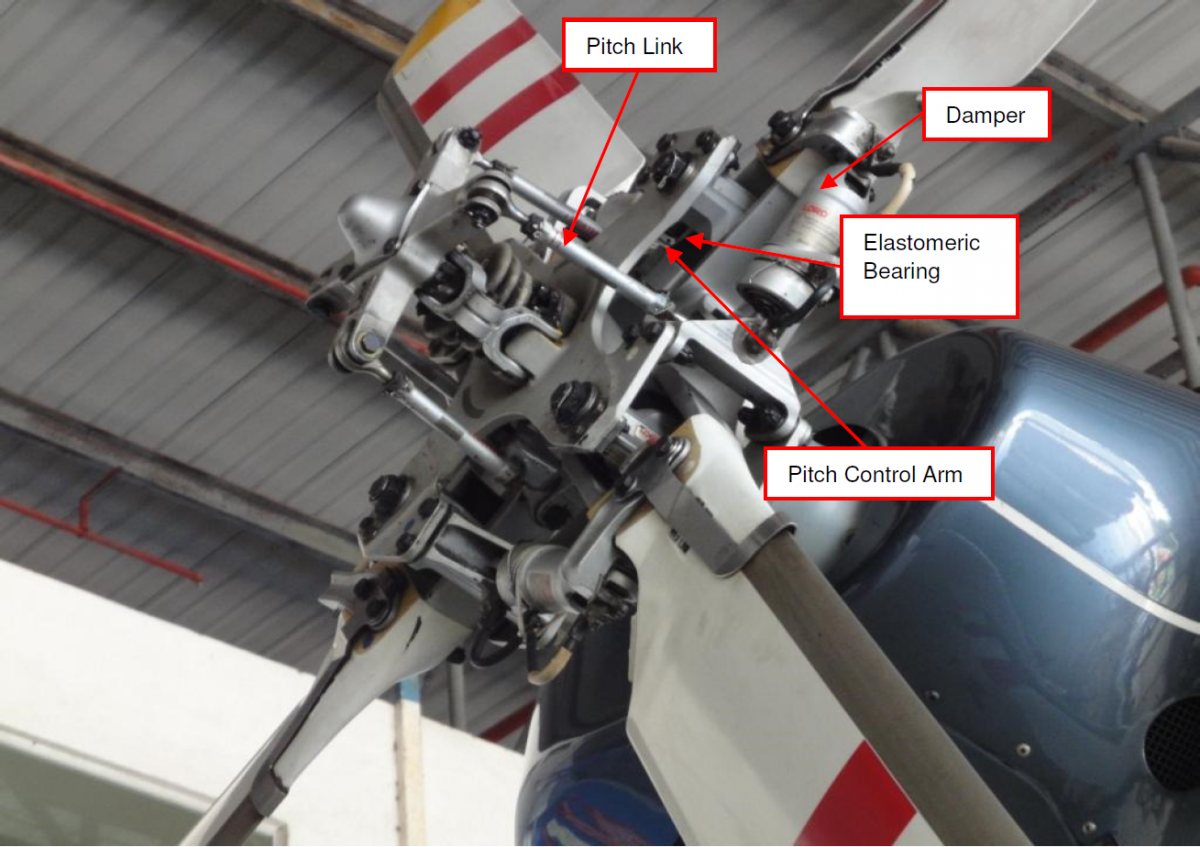 It was noted that AgustaWestland's initial response to the Hong Kong accident was that "no corrective actions…had been considered necessary" in respect of the AW139. But after the Qatar accident occurred 10 months later, that position began to be reconsidered.

By this time, examination of samples from the Blue and Yellow blades plus the remaining section of the White blade had indicated that these blades "did not comply fully with AgustaWestland's specifications in the root end area" with "manufacturing discrepancies including undersize and high level of voids of the upper and lower straps of the blade samples" were found. Reduction of torsion box thickness was also noted from the remaining portion of the White blade. Additionally, dis-bonding of the pitch control arm was found.

In the light of all these findings, the Investigation had concluded that the manufacturing process for AW139 tail rotor blades should be reviewed and that "further static, fatigue, dynamic and aerodynamic tests and analyses would be required to determine the cause of the breakage of the White blade and the subsequent detachment of the tail rotor and tail gearbox assembly". Since this action would clearly require reference to "proprietary and confidential manufacturing, design and certification data" held by AgustaWestland, ENAC (as the Competent Authority responsible for the Production Approval held by AgustaWestland) and European Aviation Safety Agency (EASA) (as the Type Certification Authority) which was not available to the Investigation, two corresponding Safety Recommendations (see below) were issued to ENAC and EASA respectively on 21 November 2011.

In responding to these Safety Recommendations and to later requests, it was noted that these agencies and AgustaWestland had subsequently provided the information necessary to complete the Investigation.

A joint review by EASA/ENAC of the interim findings of the Investigation and information from those into the other two accidents confirmed what were considered to be the main factors underlying the documented tail rotor failures:

This review also made the following significant findings:

At the conclusion of a meeting with AgustaWestland lasting from 8 - 13 September 2011, EASA identified the following actions as necessary to reducing the risk of further tail rotor failures:

On other matters, the Investigation noted that:

The Conclusion of the Investigation was that the failure of the tail rotor White blade had led to tail rotor imbalance which had created static overload of vertical fin structure at a magnitude high enough to sever the tail rotor assembly from the fin so that directional control of the helicopter was no longer possible.

The Investigation formally documented the Causal Factors for the accident as:

Safety Action taken during and as a result of the Investigation began after the Qatar accident and initially consisted of an EASA Emergency AD mandating an Alert SB issued by Augusta Westland relating to tail rotor blade inspections (36% of inspected blades were faulty) and the introduction of a new blade life limit. After the Brazilian accident, additional limits on blade life based on another Alert SB issued by AgustaWestland were mandated in a second EASA Emergency AD. Subsequently, AgustaWestland made a large number of changes to the Product Specification for manufacture of the tail rotor blades and finally introduced an improved blade which "fully restored the original tail rotor blade safe life".

It was noted that in respect of the blade failures which had occurred "the EASA Continuing Airworthiness Team concluded that there could be a possibility that tail rotor blades installed on AW139 fleet could contain defects and flaws in excess of those assumed during the static and fatigue tests performed for the certification".

Two Safety Recommendations were made during and as a result of the findings of the Investigation on 21 November 2011 as follows:

It was noted that a number of "Useful or Effective Investigation Techniques" in the area of forensic engineering had been employed during the central airworthiness element of the Investigation in order to fully understand the failure characteristics of the blade which fractured and so precipitated the accident: