On 10 August 2014, one of the engines of an Antonov 140-100 departing Tehran Mehrabad ran down after V1 and prior to rotation. The takeoff was continued but the crew were unable to keep control and the aircraft stalled and crashed into terrain near the airport. The Investigation found that a faulty engine control unit had temporarily malfunctioned and that having taken off with an inappropriate flap setting, the crew had attempted an initial climb with a heavy aircraft without the failed engine propeller initially being feathered, with the gear remaining down and with the airspeed below V2.

On 10 August 2014, the Number 2 engine of an Antonov 140-100 (EP-GPA) being operated by Sepahan Airlines from Tehran Mehrabad to Tabas as flight 5915 failed just as the aircraft was about to become airborne from runway 9L. Once airborne, the aircraft was seen to diverge to the right of the runway centreline but reached only a low height before descending, right wing down, and crashing within a nearby industrial complex. The effects of the impact and a post crash fire destroyed the aircraft and 40 of the 48 occupants, including all 6 crew members, died at the time of the crash or subsequently from the injuries sustained in it. The remaining 8 occupants sustained serious injuries but survived. Some collateral damage to structures and trees at the crash site occurred.

An Investigation was carried out by the Iran Civil Aviation Organisation (CAO) Accident Investigation Board (AAIB). The CVR and FDR were recovered and their data were successfully downloaded and used to assist the Investigation. It was noted that the prevailing weather conditions had been good and had not had any direct bearing on accident causation.

It was noted that the 63 year-old Captain, who had been PF for the accident flight, had 9,478 total flying hours which included 2,000 hours on type. The 32 year-old First Officer had 572 total flying hours which included about 400 hours on type. It was also noted that the An-140 aircraft involved had been assembled in Iran by the Iran Aircraft Manufacturing Industrial Company (HESA).

It was established that immediately prior to the accident flight, the crew had begun their duty day by operating the same aircraft from Isfahan to Tehran. The accident takeoff from the 4,300 metre-long runway 29L had been made with Flap 10°and had proceeded uneventfully until just after the V1 call by the First Officer when, passing 116 knots with 5 knots to go below the applicable Vr, the first signs of malfunction of the No 2 engine became apparent. As it ran down, No 1 engine power was automatically increased to the 'contingency' setting where it remained until the aircraft eventually stalled and crashed less than a minute later having reached a maximum height of only 130 feet. After what was identified as a marginally premature rotation, takeoff was continued with FDR data showing that the angle of attack had been above AFM recommendations (4-7°) and that airspeed, which never reached V2, had "continually reduced". The landing gear was not retracted.

It was established that the failure of the No 2 engine had been caused by a temporary (17 second) malfunction of its electronic engine controller (EEC) which had resulted in the engine being starved of fuel. Because of this, the continuous aural and visual warning of engine failure did not begin until about 14 seconds after the failure but CVR data showed the Captain had detected and called it after 5 seconds. However, it was found that the crew had not then manually feathered the failed engine propeller by pressing the 'ENGINE OFF - FEATHER' button as required by the AFM and a further consequence of the failure of the EEC had been that it did not detect the failure and had therefore not signalled that it should be shut down and its propeller feathered. This only happened when the No 2 engine EEC began to function normally again as the aircraft was recorded as climbing through 30 feet agl. Meanwhile, the Captain had begun corrective left rudder inputs but despite this, the aircraft began to deviate to the right of the runway extended centreline - see the ground track illustration below. Once the right engine propeller had been automatically feathered by the EEC, the aircraft remained airborne for a further 30 seconds, but as the angle of attack had reached 12°, pitch control had eventually been lost and an aerodynamic stall had immediately preceded ground impact. It was noted that the First Officer had declared the emergency status to ATC at about the time the delayed engine failure warning had commenced but by this time ATC were already aware that the departure was not proceeding normally having observed the deviation to the right and a poor climb rate. 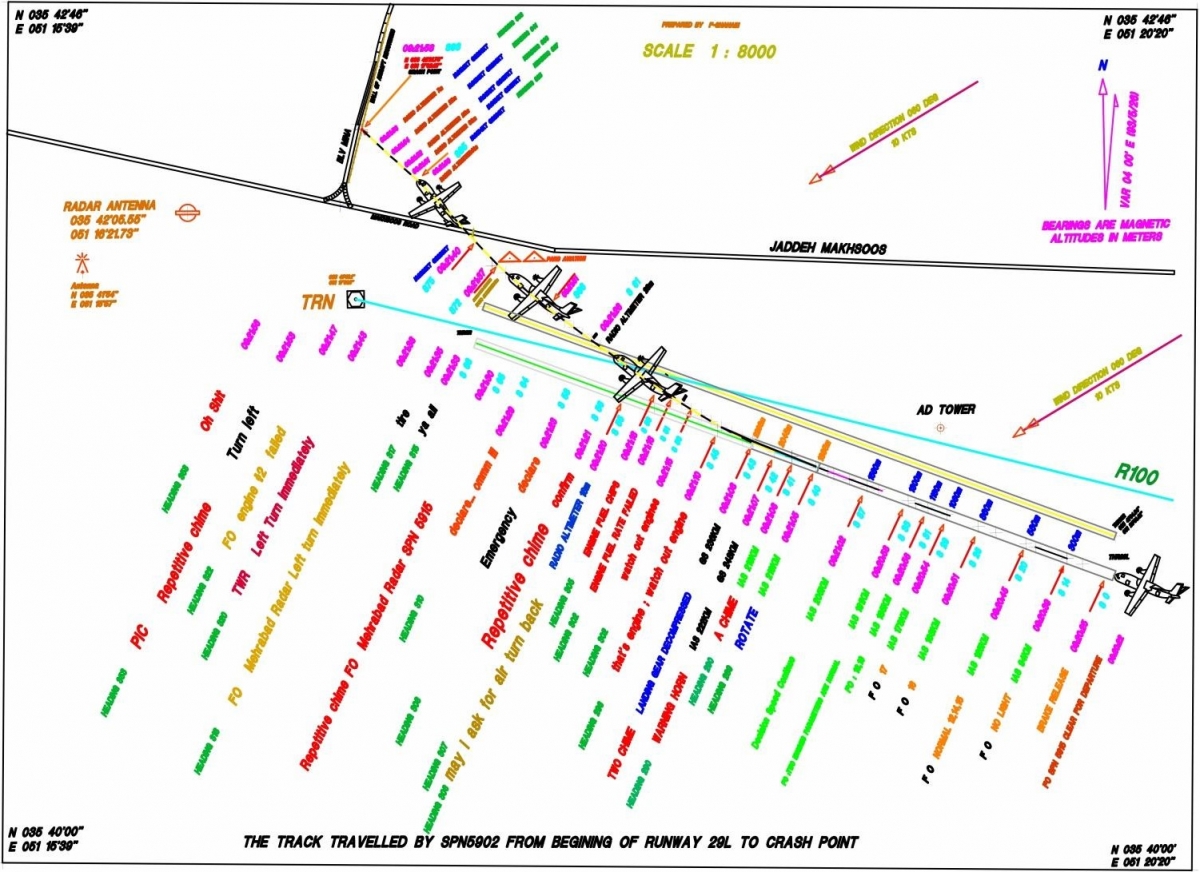 An annotated aircraft ground track - the poor quality of some text is a function of the source. [Reproduced from the Official Report]

In respect of the EEC malfunction which delayed full feathering of the failed engine propeller, the Investigation found that such malfunctions had been "the main cause of several previous accidents and incidents" and that although the component designer had "performed some modifications and software improvements to rectify the malfunction […] the failure rate […] was not reduced to acceptable levels".

Various other matters were examined and their relevance either confirmed, noted or dismissed. These included:

The Investigation also found that although ATC activated the crash alarm promptly, poor coordination and an incorrect report of the location of the crash site led to the Airport RFFS reaching the aircraft after the City Firefighting team who had turned up after receiving direct calls from members of the public who had seen the crash. It was found that all those who survived had escaped from the wreckage of the aircraft unaided prior to the arrival of any emergency services. It was also noted that the Airport had failed to provide a timely alert to the Tehran Rescue Organisation as required in the Airport Emergency Plan.

The Conclusion of the Investigation was that the Main Cause of the accident was "a combination of the failure of the Electronic Engine Control (SAY-2000) simultaneously with the (uncommanded) shut down of engine No 2 about 2 seconds before aircraft lift-off and a confusing performance chart in the AFM which led to the pilots relying on a performance calculation that significantly over-estimated the aircraft MTOM".

A total of 24 Safety Recommendations were made as follows:

The Final Report of the Investigation was adopted and issued on 9 August 2017.