On 27 October 2018, a single pilot Augusta Westland AW169 lifted off from within the Leicester City Football Club Stadium, but after a failure of the tail rotor control system, a loss of yaw control occurred a few hundred feet above ground. The helicopter began to descend with a high rotation rate and soon afterward impacted the ground and almost immediately caught fire, which prevented those onboard surviving. An Investigation is being conducted by the UK AAIB.

On 27 October 2018, an Augusta-Westland AW169 (G-VSKP) departed controlled flight in night VMC and impacted the ground shortly after lifting off from within the Leicester City football club stadium on a private flight to London Stansted. Immediately after impact, a fierce fire began and the pilot and all four passengers died. The helicopter was substantially damaged by the combined effects of the impact and fire.

An Investigation has been commenced by the UK Air Accident Investigation Branch (AAIB). The Combined Voice and Flight Data Recorder (CVFDR) installed in the helicopter has been recovered and the wreckage has been transported to AAIB facilities in preparation for detailed examination.

It was established that three minutes after engine start, the helicopter had lifted off from the centre of the football pitch, yawed 15° left and then moved forward a few metres before beginning to climb on a planned rearward flight path whilst maintaining a northerly heading. Gear retraction began as the helicopter passed approximately 320 feet agl, but the climb then paused. Heading changes, which were initially consistent with the direction of pedal movements, occurred but the helicopter then entered an increasing yaw to the right which was contrary to a left pedal input made by the pilot. After reaching approximately 430 feet agl, the helicopter began to descend with a high rotation rate and struck open ground in an essentially upright position, with the landing gear fully retracted, before rolling onto its left side and rapidly becoming engulfed in an intense post-impact fire. Bystanders and emergency services personnel reached the scene quickly, but were unable to gain access to the helicopter because of the intensity of the fire. The fire caused substantial damage to the predominantly composite structure of the helicopter, with several sections of the airframe being almost completely consumed by the fire and large parts of the remaining fuselage suffering a “significant loss of structural integrity”.

It was noted that the prevailing weather conditions included good visibility and the flight path was clear of cloud. A generally north-westerly wind of 10 to 12 knots was present at the surface and the 1000-foot wind was estimated to have been around 25 to 30 knots from a similar direction. 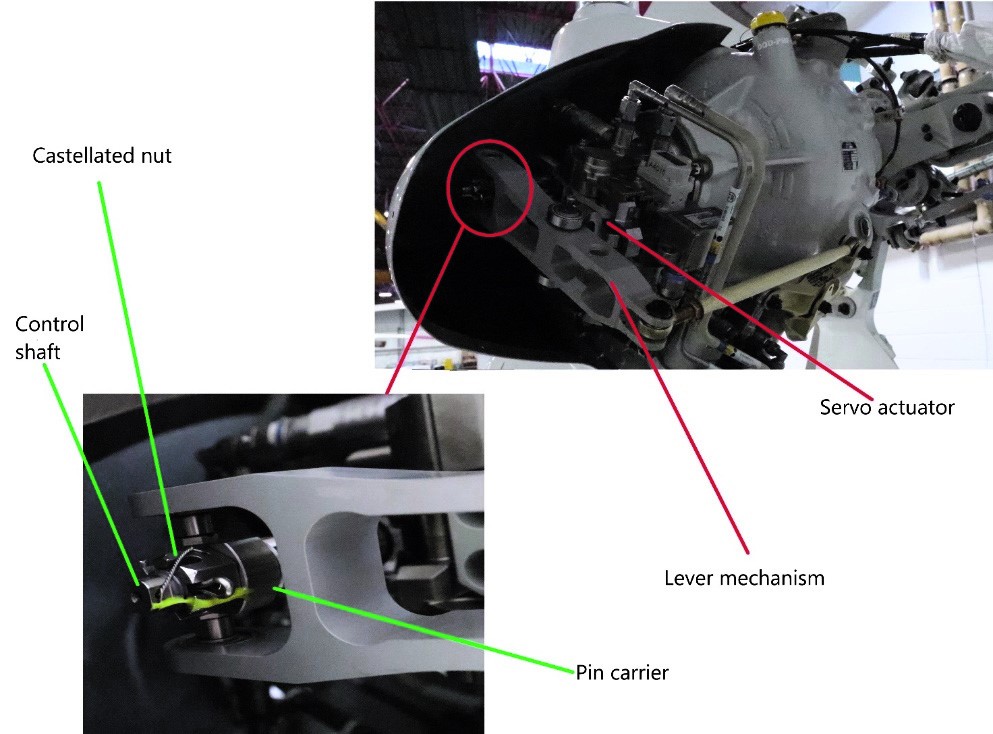 A subsequent examination of the assembly in the wreckage found that the split pin, spacers and one of the locating bearings were missing from the input lever. The locking nut and pin carrier were found loose in the tail rotor fairing and were bonded together when they should have been separate components. The castellated nut threads appeared to be undamaged, but there was no sign of the split pin and the control shaft threaded section had moved inside the outer shaft and was no longer visible.

The control shaft, locking nut and pin carrier and adjacent parts of the assembly were then removed from the wreckage to permit a detailed inspection. It was found that the locking nut on the bearing end of the control shaft had been torque loaded to a significantly greater extent than that specified. The inner races of the bearing could only be rotated by hand a few degrees in either direction and (see the illustration below) there was a build-up of black grease inside the slider unit around the inboard face of the duplex bearing with the part of the control shaft adjacent to this bearing face showing signs of burnt-on grease and discolouration along its length.

The end of the tail rotor actuator control shaft after removal from the duplex bearing containing it. [Reproduced from the Official Report]

CT scanning of the removed parts of the assembly showed that:

The effect of the disconnection was to prevent the feedback mechanism for the tail rotor servo actuator from operating so that movement of the actuator stopped when the yaw control input made by the pilot has been satisfied. This rendered the yaw stops ineffective and allowed the tail rotor actuator to continue changing the pitch of the tail rotor blades until they reached the physical limit of their travel thereby creating an uncontrollable right yaw.

It was concluded that “sufficient force and torque had been applied to the castellated nut on the actuator end of the control shaft to friction weld it to the pin carrier and to shear the installed split pin”. It was further concluded that the observed condition of the duplex bearing and the increased torque load on the castellated nut that remained on the end of the shaft was consistent with rotation of the tail rotor actuator control shaft, which when a yaw control input occurred whilst rotation was taking place led to the shaft ‘unscrewing’ from the nut. This action disconnected the shaft from the actuator lever mechanism and caused the nut to become welded to the pin carrier.

The ongoing Investigation is seeking to identify what initiated the failure that resulted in the loss of tail rotor control and the exact sequence of it as a priority. Work is also continuing to determine what caused the damage found to the duplex bearing and establish the extent of its contribution to the failure sequence. Also, whether any other factors may have contributed to the loss of tail rotor control remains under review.

The following Safety Actions consequent upon the findings of the Investigation so far are known to have been taken:

Two Special Bulletins, upon which this summary is based have been issued, the first on 14 November 2018 and the second on 6 December 2018. The AAIB have stated that further Bulletins will be issued if there is significant interim information to communicate before the Investigation has been completed.On 27 October 2019, the AAIB stated that their detailed Final Report of this investigation would be published during 2020