On 14 August 2013, a UPS Airbus A300-600 crashed short of the runway at Birmingham Alabama on a night IMC non-precision approach after the crew failed to go around at 1000ft aal when unstabilised and then continued descent below MDA until terrain impact. The Investigation attributed the accident to the individually poor performance of both pilots, to performance deficiencies previously-exhibited in recurrent training by the Captain and to the First Officer's failure to call in fatigued and unfit to fly after mis-managing her off duty time. A Video was produced by NTSB to further highlight human factors aspects.

On 14 August 2013, an Airbus A300-60 (N155UP) being operated by United Parcel Service on a scheduled cargo flight (1353) from Louisville KY to Birmingham AL crashed short of the runway at destination during a non precision approach flown at night in Instrument Meteorological Conditions (IMC). The aircraft was destroyed by the impact and post crash fire and both pilots were killed. There was minor damage to local properties

Details of the A300 type experience of the two pilots showed a considerable difference. The 58 year old Captain had accumulated over 3000 hours on type since 2004 but had only achieved promotion to the rank of Captain in 2009 at the age of 54. Prior to 2004, he had been at UPS since 1990, when he had joined UPS as a Boeing 727 Flight Engineer. The 37 year old First Officer had only 403 hours on the A300, having previously been a First Officer on the Boeing 757 and 747 after initially also joining UPS as a Flight Engineer in 2006.

It was established that the Captain had been PF for what would be a short flight of about 45-50 minutes. Prior to beginning descent, he had briefed for the 18 LOC approach and the First Officer had entered it into the FMC. The intended method of descent was a CDFA using a vertical profile generated by the FMC to provide guidance to the crew after leaving the FAF. This did not alter the decision point for visual transition but simply defined that altitude (1200 feet Altimeter Pressure Settings) as a DA rather than an MDA.

As the aircraft neared the FAF, with the AP engaged, the expected approach clearance to runway 18 was received. However, although the flight plan for the approach had already been entered into the FMC, "the Captain did not request and the First Officer did not verify" that the flight plan reflected only the specified approach fixes and so the direct-to-airport leg that had been set up during the flight from Louisville remained in the FMC. The result was a flight plan discontinuity message in the FMC which rendered the vertical profile generated for the CDFA meaningless. Landing clearance was received and the First Officer actioned the Landing Checklist. The FAF was crossed 200 feet above the published minimum of 2300 feet QNH.

Had the FMC been properly sequenced and the intended vertical profile approach selected, the AP would have followed the anticipated CDFA but this did not occur. Neither pilot recognised what was wrong or that, as a result, the vertical deviation indicator (VDI) was at full scale fly up, although they were aware that they had been slightly high at the FAF. When the AP did not engage in profile mode, the PF selected VS mode - without briefing the First Officer. In effect, in the absence of any prior assessment of the appropriate rate of descent, the approach "essentially became a 'dive and drive' approach where the pilot descends the aircraft to the MDA and levels off until the runway is in sight not later than the specified missed approach point". However, seven seconds after completing the Landing Checklist, the First Officer noticed that the Captain had changed to VS mode and soon afterwards, he increased the VS rate to 1500 fpm. The First Officer made the required 1,000 feet aal call (equivalent to 1530 feet QNH) and the Captain noted that the decision altitude was 1200 feet QNH whilst maintaining a 1500 fpm rate of descent. Since UPS stabilised approach criteria include a maximum 1000 fpm rate of descent at and beyond this point, the effect was a violation of the requirement to go around if not stabilised. At and beyond this point, it was concluded that neither pilot was adequately monitoring the rate of descent - or the altitude.

At 1300 feet QNH, the First Officer failed to make the required 'approaching minimums' call and at 1200 feet QNH, the 'minimums' call. The latter should have elicited either a landing/continuing or go-around response from the Captain. The high rate descent continued and at 1000 feet QNH (about 250 feet aal) an Terrain Avoidance and Warning System (TAWS) 'Sink Rate' alert was annunciated. The PF began to reduce the selected vertical speed to about 600 fpm and, 3.5 seconds later, announced that the runway was in sight. After a further 2 seconds, the PF reduced the selected vertical speed to 400 fpm but the aircraft was still descending rapidly on a trajectory that was taking it to a position about 1 nm short of the runway. Still neither pilot appeared to be aware of the aircraft altitude - or what would have been an abnormal visual perspective. Soon afterwards, the AP was disconnected and almost immediately the sound of the aircraft contacting trees could be heard on the CVR. An EGPWS 'Too Low Terrain' Alert was annunciated and there were several additional impact noises until the recording ended.

An NTSB Video was released after completion of the Investigation to highlight significant human factors aspects of the accident:

The site of the crash in relation to the intended landing runway can be seen in the annotated picture below. It was noted that the crew had expected to become visual at about 1000 feet agl based on the weather reports they had received but in fact had only seen the runway about 5 seconds before contact with the trees began. The vertical profile flown compared to the charted step-down and CDFA procedures is shown on the diagram below the picture. 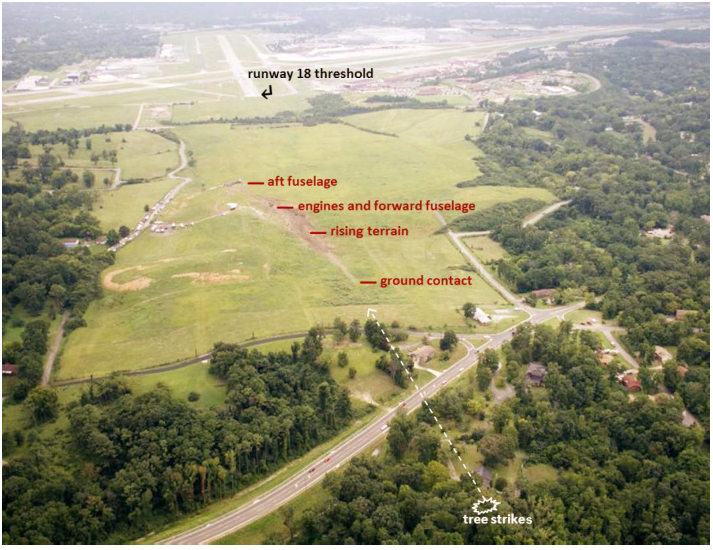 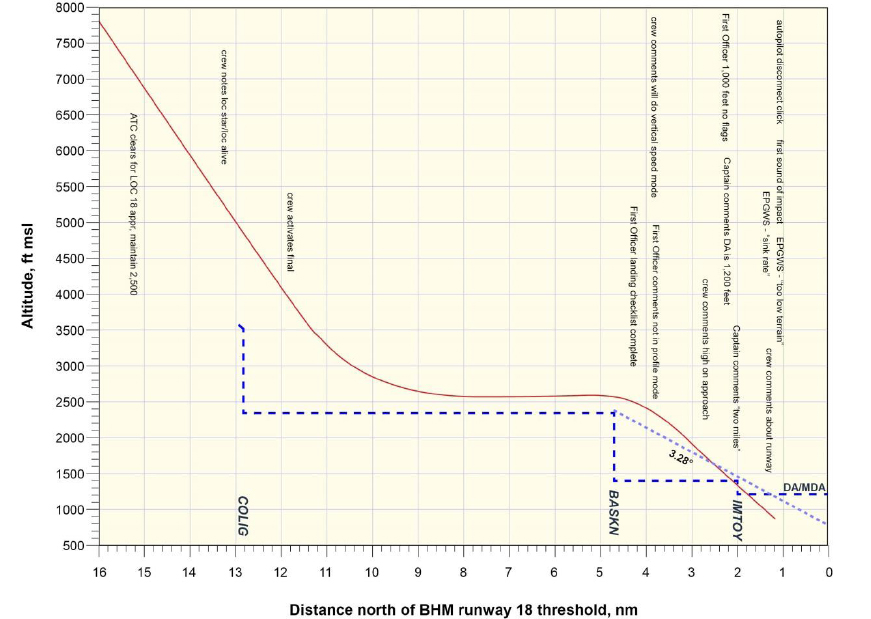 Using the evidence assembled, the Investigation identified and examined a number of 'Safety Issues' including the following:

The Investigation reaffirmed the established view that, when flying non precision approaches, the continuous descent final approach technique provides a safer alternative to the 'dive and drive' technique to which the accident approach had 'degenerated'.

In respect of the way the crew flew the accident approach, it was concluded that:

In respect of the effectiveness of the safety net against CFIT provided by EGPWS, it was concluded that although newer EGPWS software than that installed in the accident aircraft - P/N 965-0976-003-218-218 or later - would have provided an earlier "Too Low Terrain" Alert (6.5 seconds earlier and 150 feet higher) than that received) the effect of this on the outcome of this accident could not be determined given the high rate of descent and uncertainty about how aggressively the pilots would have responded to it. It was noted that the effectiveness of TAWS as a safety net during the approach to land is limited because an escalating series of Alerts before impact with terrain or obstacles does not necessarily occur.

It was also noted that in respect of the absence of an automatic 'minimums' callout at MDA, either the EGPWS '500' feet callout or the Airbus '400' feet callout could have made the pilots aware of their proximity to the ground and they could have taken more decisive action to arrest the descent.

The Investigation determined that the Probable Cause of the accident was "the flight crew’s continuation of an unstabilised approach and their failure to monitor the aircraft’s altitude during the approach, which led to an inadvertent descent below the minimum approach altitude and subsequently into terrain".

Contributory Factors were identified as:

Twenty Safety Recommendations were made as a result of the Investigation as follows:

The Final Report was adopted on 9 September 2014 and subsequently published. The short video on the link above which discusses some key human factors aspects of the accident was subsequently released on 1 June 2015, the first time NTSB has done this.