On 26 April 1994, the crew of an Airbus A300-600 lost control of their aircraft on final approach to Nagoya and the aircraft crashed within the airport perimeter. The Investigation found that an inadvertent mode selection error had triggered control difficulties which had been ultimately founded on an apparent lack understanding by both pilots of the full nature of the interaction between the systems controlling thrust and pitch on the aircraft type which were not typical of most other contemporary types. It was also concluded that the Captain's delay in taking control from the First Officer had exacerbated the situation.

On 26 April 1994, an Airbus A300-600R (B1816) being operated by China Airlines on a scheduled international passenger flight from Taipei to Nagoya as CI 140 and on final approach to destination in night Visual Meteorological Conditions (VMC) crashed within the airport perimeter out of control and was destroyed by the impact and a post crash fire. 264 of the 271 occupants were killed and the remaining 7, all passengers, were seriously injured.

An Investigation was carried out by the Japan Aircraft Accident Investigation Commission (JAAIC). Data from both the Flight Data Recorder (FDR) and the Cockpit Voice Recorder (CVR) were successfully downloaded in support of the Investigation.

Once it had been established that there was no evidence to indicate that the accident could be attributed in any way to a lack of continued airworthiness or to any aspect of aircraft loading, attention was focused on the actions of the crew and their control of engine thrust and aircraft pitch with particular focus in the A300-600R Automatic Flight System (AFS) and the crew interface with it during the latter stages of the accident approach.

It was a noted that the 42 year-old Captain had accumulated 8,340 total flying hours including 1,350 on type and had joined the airline as a First Officer in 1989 after 18 years in the Taiwanese Air Force mainly as a C47 (Dakota) pilot where he had flown 4,826 of his total flying hours. After three years as a First Officer on the Boeing 747, he had qualified on the A300-600R and been immediately promoted to Captain on the type in 1992. The First Officer, who was PF for the accident flight, had accumulated 1,624 total flying hours of which 1,033 were on type. He had joined the airline as a cadet pilot and obtained his CPL and A300-600R type rating in 1992. Prior to beginning line flying training on the type, he had received three hours time on the aircraft during type training in France and a further four hours "basic flight training" at China Airlines and had been appointed as an A300-600R First Officer thirteen months prior to the accident.

The flight had been uneventful en route and it was noted that the Captain had briefed the First Officer (PF) on the approach and landing. The aircraft had commenced an ILS approach to runway 34 at Nagoya with both APs and the A/T (autothrust) engaged but shortly before passing the Outer Marker, the First Officer had disengaged both the APs and continued manually. A landing clearance was received but soon afterwards, with the aircraft passing 1070 feet, he had inadvertently selected the 'GO' lever on the thrust levers which put the A/T into go-around mode with a corresponding thrust increase. The aircraft leveled off at approximately 1,040 feet and began to deviate above the ILS GS and the Captain instructed the First Officer to disengage the 'GO' lever and correct the flight path down to regain the ILS GS. The First Officer applied a nose down input to the control column but did not disengage the 'GO' lever despite two further reminders from the Captain. To assist recapture of the GS, the First Officer simultaneously re-engaged both APs - although there was no comment about this action on the CVR from either pilot. As he manually attempted to recapture the glide slope from above by reducing thrust and pushing the control column forward, the AP - in go around mode because of the operation of the 'GO' lever - was providing opposite (pitch up) commands to the Trimmable Horizontal Stabiliser (THS). The THS reached its maximum pitch up position within 30 seconds as the aircraft descended through approximately 880 feet. Opposite elevator pitch-down masked the out of trim condition but considerable force was required on the control column. The First Officer tried to reduce this by using the control column pitch trim switch, which acts on the THS, but this action had no effect because pitch trim control of the THS was inhibited by design with the AP engaged.

Descending through approximately 700 feet, the APs were disengaged but the THS remained at its out of trim position and because of the reduction in thrust, airspeed had dropped by about 10 knots. The increasing AoA then triggered flight envelope protection and the "alpha floor" function was activated which caused an increase in thrust and a further pitch-up. Because of the greater surface area of the THS compared to the elevator, elevator authority was overcome by the THS. The First Officer stated that he could not push the nose down any further down, noted the alpha floor activation and, with the aircraft at about 500 feet, the Captain - unaware of the THS position - took over as PF. Finding that he too could not increase forward pressure on the control column, he reduced thrust to try and regain the ILS GS but on realising that nose up pitch was increasing and that he was unable to control it, he called and began a go around. The First Officer advised ATC accordingly. The increased thrust which followed the selection of the 'GO' lever increased the nose-up pitch moment and an uncontrolled and increasingly steep climb began with the AoA rapidly increased. At this point, the FDR showed that the Captain had briefly operated the pitch trim which was taken as evidence that he was unaware of the extreme nose-up position of the THS. The initial retraction of the flaps/slats in accordance with the standard go-around procedure further increased the pitch up as well as reducing the stall margin. The aircraft continued to climb steeply reaching around 50° nose up as the stall warning sounded briefly. A few seconds later, at 1730 feet and shortly after a further (standard) flaps/slats retraction, the aircraft stalled, the nose dropped and a steep dive began. The Captain pulled the control column fully aft and the aircraft remained stalled until ground impact in an almost wings-level attitude, which occurred just over 40 seconds after he had taken control. 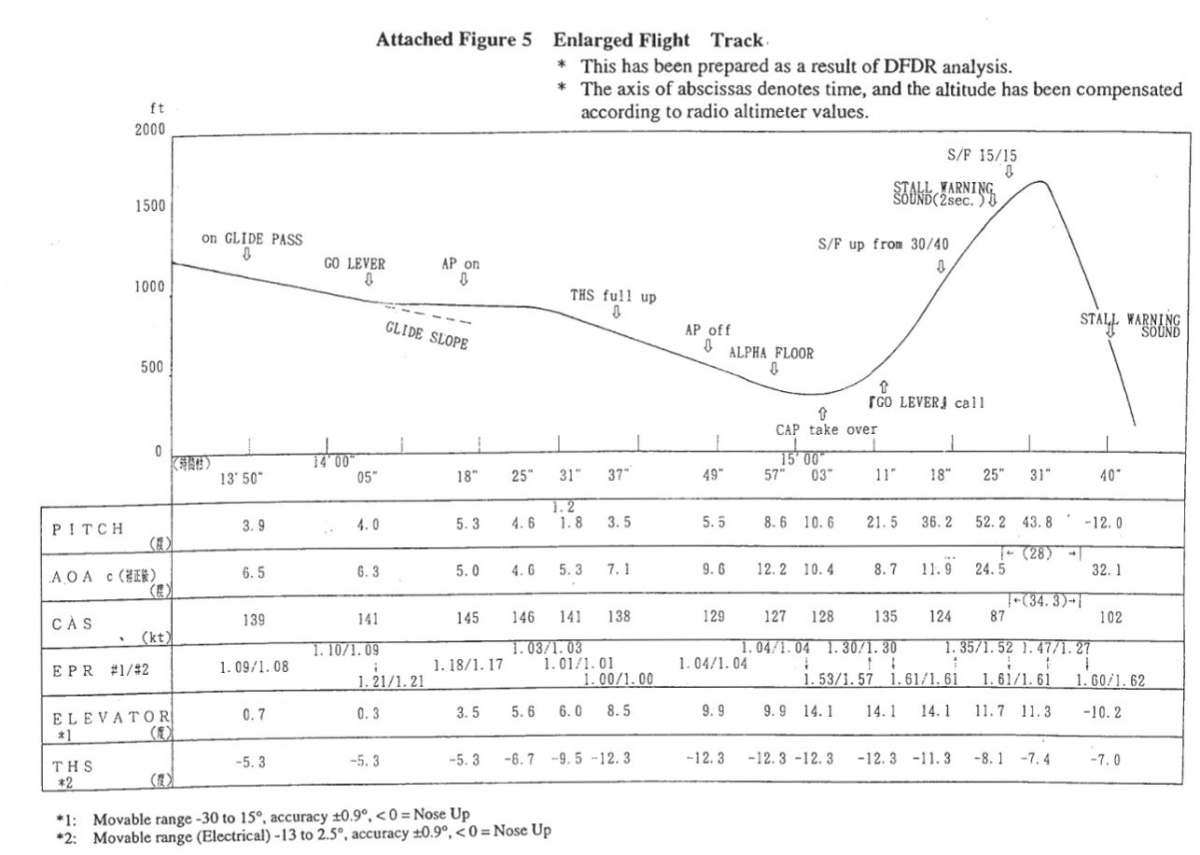 The Investigation examined in detail the way the A300 AFS worked with particular reference to the crew awareness of this, since both were considered to have been central to accident causation. The occurrence of previous serious incidents to an Airbus A300B4 and an Airbus A300-600 in early 1989 and to an Airbus A310 in early 1991 which had also involved crew AFS awareness were noted as was and the Airbus response to them. A serious and related incident to an Airbus A310 which occurred in September 1994 whilst the Nagoya Investigation was in progress was also noted.

Relative to the accident under investigation, the significant features of the A300-600R AFS, many of which were very different to the flight control systems of other aircraft and/or were differently inter-related, were noted as:

It was concluded that at no time had either pilot appeared to have appreciated the extent of or origin of the abnormal out-of-trim situation which was at the root of their successive difficulties in controlling the aircraft. It was noted that it was "the activation of the alpha-floor function under the abnormal out-of-trim condition (which had) caused a sudden increase in the aircraft's pitch angle and contributed to its steep climb and subsequent stall".

It was recognised that although both pilots had completed all the required aircraft type training, "this training was not necessarily sufficient to understand the sophisticated and complicated AFS system". It was further considered that information on the operational implications of the AFS system provided in the FCOM was inadequate.

It was noted that the DGAC France, as Regulatory Authority had originally accepted the "Recommended" (i.e. optional) status of the Airbus Industrie SB A300-22-6021 issued on 24 June 1993 which removed the restriction on pilot override of an engaged AP when LAND or GO AROUND modes were engaged provided the aircraft was in excess of 400 feet agl. However, it was noted that after the issue of a DGAC France AD to the same effect on 17 August 1994, Airbus Industrie had then re-classified this SB as "Mandatory".

The Investigation determined that the Cause of the Accident was:

A series of Contributory Factors which led to the crew failing to recognise the situation they were in quickly enough to recover control were found to have included the following:

Early in the Investigation, the JAAIC provided the NTSB with "pertinent details of the investigation" including data from the CVR and FDR. Although made aware of the intention of the intended issue of an AD by the French DGAC as Type Certification Authority, the National Transportation Safety Board (USA) (NTSB) had "concerns regarding the A300 autopilot system that it believed the Federal Aviation Administration (FAA) should address as soon as possible". Accordingly, it formulated three Safety Recommendations and communicated them on 31 August 1994 in an explanatory letter. They were:

Safety Action taken whilst the Investigation was in progress included the following:

Eight detailed Safety Recommendations were made by the JAAIC at the conclusion of their Investigation as follows:

a) controls and operations which crews rarely experience in daily flight, such as mode changes and manual overrides during autoflight.

b) the establishment of measures which allow crews to easily recall the controls and operations described in (a) above in flight in order to effectively implement them.

d)awareness which will reduce the chances that pilots will inadvertently activate the A300-600R thrust lever go around switch and are able to take appropriate action if they do.

On 15 December 2014, the Captain of a Saab 2000 lost control of his serviceable aircraft after a lightning strike when he attempted to control the aircraft manually without first disconnecting the autopilot and despite the annunciation of a series of related alerts. The aircraft descended from 4,000 feet to 1,100 feet at up to 9,500 fpm and 80 knots above Vmo. A fortuitous transient data transmission fault caused autopilot disconnection making it possible to respond to EGPWS 'SINK RATE' and 'PULL UP' Warnings. The Investigation concluded that limitations on autopilot disconnection by pilot override were contrary to the type certification of most other transport aircraft.