On 12 November 2001, an Airbus A300-600 encountered mild wake turbulence as it climbed after departing New York JFK to which the First Officer responded with a series of unnecessary and excessive control inputs involving cyclic full-deflection rudder pedal inputs. Within less than 7 seconds, these caused detachment of the vertical stabiliser from the aircraft resulting in loss of control and ground impact with a post crash fire. The Investigation concluded that elements of the company pilot training process and the design of the A300-600 rudder system had contributed to this excessive use of the rudder and its consequences.

On 12 November 2001, the crew of an Airbus A300-600 (N14053) being operated by American Airlines on a scheduled international passenger flight from New York JFK to Santo Domingo, Dominican Republic lost control of their aircraft just 1½ minutes after takeoff during the second of two minor wake turbulence encounters and the subsequent destruction of the aircraft by ground impact forces and a post crash fire led to all 260 occupants and five others on the ground being killed.

An Investigation into the accident was carried out by the NTSB. The FDR and CVR were recovered and their relevant data were successfully downloaded. Radar surveillance data for the departures of both the A300 and the preceding 747 were also available. A video-referenced study was undertaken to compare elapsed time information taken from available video recordings with that of the radar/CVR/FDR data and to thereby calculate the position of the aircraft after the loss of FDR and radar data. Because the CVR was powered from the emergency bus bar, it continued to record data after the engines separated from the aircraft.

It was established that the taxi out for departure from runway 31L was in turn behind a Japan Airlines Boeing 747-400. Shortly after the 747 had begun its takeoff, the TWR controller cautioned the A300 pilots about wake turbulence and instructed them to line up and hold. The A300 subsequently lifted off about 1 minute 40 seconds after the 747 and thereafter was cleared to turn left, fly the ‘Bridge’ climb and change frequency to New York TRACON. Radar data indicated that the aircraft began its climbing left turn at 500 feet and established on a track of 220º. The Captain checked in with the TRACON departure controller and advised passing 1300 feet for 5000 feet and was re-cleared to 13,000 feet.

Just after a minute airborne, an instruction to the A300 to turn left and proceed direct to the WAVEY intersection was given and acknowledged. At this time, FDR data indicated that there had been a mild wake turbulence encounter which had been recognised as such by the crew. FDR data showed that there had been some movement in all the primary flight controls over a period of 5 seconds as the turn to WAVEY was made. Then, approximately 10 seconds later, with the aircraft climbing at approximately 250 knots, a second mild wake turbulence encounter occurred in response to which there were a series of much more aggressive control inputs. After an initial right rudder input, the First Officer proceeded with five alternating full deflection rudder pedal inputs. These were accompanied initially by “a thump, a click and two thumps”, followed two seconds later by a “snap” and one second after that by a “loud thump” as the right rear main attachment fitting of the vertical stabiliser failed. The stabiliser itself then separated from the aircraft at the same time as the CVR recorded a “loud bang”, some 6½ seconds after the sequence of aggressive control inputs had begun. Subsequently, both engines also separated from the aircraft before impact. The ground track of the aircraft is depicted on the illustration below.

It was noted that the origin of the two short wake turbulence episodes was the 747 which had taken off the same runway as the A300 and which had then followed a similar left turning track whilst remaining a little over half a mile west of and above that of the A300 and that the available evidence was that neither was more than minor in nature. It was also noted that the Captain had not sought to intervene during the second turbulence encounter and that there was no evidence on the CVR to suggest that he had appreciated that the upset was a consequence of the First Officer’s control inputs, which given its short duration was judged ‘understandable’. 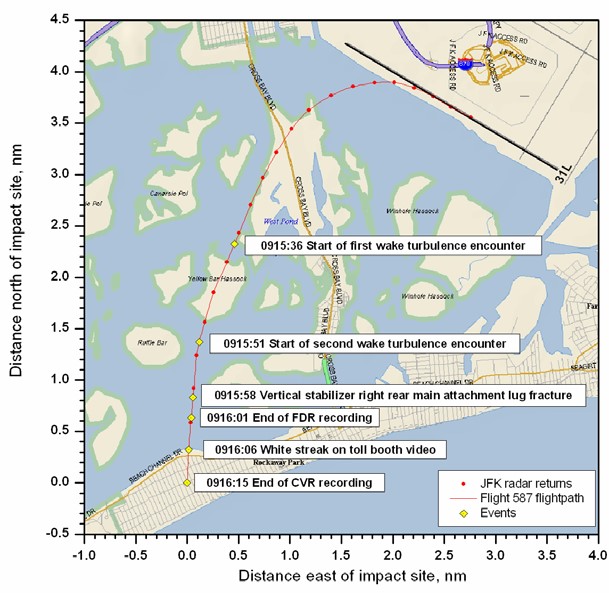 The A300 radar ground track annotated with key events (the ‘white streak’ mentioned was fuel liberated from the wing following engine separation prior to impact). [Reproduced from the Official Report]

No evidence was found that mechanical failure could have caused the five cyclic movements of the rudder pedals and rudder recorded immediately after the onset of the second turbulence encounter. It was also found that the only way to move the rudder in a way that could create an FDR record which would match that of the accident aircraft was if a pilot depressed the rudder pedals and it was therefore concluded that the recorded movements had been the result of the First Officer’s rudder pedal inputs. It was also concluded after extensive analysis that the vertical stabiliser “had performed in a manner that was consistent with its design and certification” and that it had detached from the fuselage in overstress after exposure to aerodynamic loads which were around twice the certified limit load design envelope and also greater than the certified ultimate load design envelope. The remainder of the Investigation therefore centred on analysis of the First Officer’s rudder pedal inputs.

It was determined that three main factors had influenced the First Officer’s use of the rudder during the accident sequence:

Evidence of his responses to previous wake turbulence encounters was obtained and two company Captains provided “noteworthy accounts” of the First Officer’s reaction to such events which suggested over-reaction had been a feature of them. It was also noted that his response to the first of the two wake turbulence encounters on the accident flight had, whilst having had no direct bearing on the accident, involved control inputs that “seemed excessive” as a response to the momentary effect that it had on the aircraft.

The training on wake turbulence, upset recovery, and rudder pedal use provided in the American Airlines’ Advanced Aircraft Manoeuvring Programme (AAMP) included ground school training which “encouraged pilots to use rudder to assist with roll control during recovery from upsets, including wake turbulence”. It was also observed that the AAMP excessive bank angle recovery exercise was based on an unrealistic scenario and was capable of causing pilots “to develop control strategies that were effective in the simulator but might be inappropriate or even dangerous” if performed in an aircraft. This was considered to have had the potential to lead to the First Officer “having an unrealistic and exaggerated view of the effects of wake turbulence, erroneously associating wake turbulence encounters with the need for aggressive roll upset recovery techniques” and, as a result, developing control strategies which would produce potentially surprising and confusing outcomes if attempted in an aircraft rather than a simulator. It was further concluded that pilot training on the effect of rudder pedal inputs made at high speeds was inadequate and that it did not clearly address how the rudder limiter system operated.

It was determined during the Investigation that the type rudder control system was “more sensitive” than that on other transport-category airplanes and noted that although rudder inputs had historically been made only when aligning an aircraft with the runway during crosswind landings or retaining directional control in engine-out scenarios, rudder use was now being recommended in training such as that provided in the AAMP as a means to assisting roll control during upset recovery in some circumstances. It was also noted that the rudder limiter system on the A300-600 was of the variable stop design which means a given pedal input results in that both rudder deflection and rudder pedal travel are both limited as airspeed increases so that “a given amount of pedal input results in the same rudder deflection at all airspeeds but the pedal travel (and consequently, pedal force) required to hit the pedal stops decreases as airspeed increases”. An exemplar consequence of this design was observed as being that the rudder is “twice as responsive to a pedal displacement at 250 KCAS as it would be at 165 KCAS”.

More generally, the Investigation concluded that:

Formally documented Findings from the Investigation included those made directly in respect of the accident and its circumstances and with more general applicability. The latter included the following:

The Probable Cause of the accident was determined to be “the in-flight separation of the vertical stabiliser as a result of the loads beyond ultimate design that were created by the First Officer’s unnecessary and excessive rudder pedal inputs”.

A total of 7 new Safety Recommendations were made during the course of the Investigation as follows:

The FAA should also require revisions to airplane and pilot operating manuals that reflect and reinforce this information. In addition, the FAA should ensure that this training does not compromise the substance or effectiveness of existing training regarding proper rudder use, such as during engine failure shortly after takeoff or during strong or gusty crosswind takeoffs or landings. [A-02-01]

A total of 8 new Safety Recommendations were made at the conclusion of the Investigation as follows:

The Final Report of the Investigation was adopted on 26 October 2004 and subsequently published.