On 17 May 2015, an Airbus A300-600 crew descended their aircraft below the correct vertical profile on a visual daytime approach at Yerevan and then landed on a closed section of the runway near the displaced runway threshold. The Investigation found that the crew had failed to review relevant AIS information prior to departing from Tehran and had not been expecting anything but a normal approach and landing. The performance of the Dispatcher in respect of briefing and the First Officer in respect of failure to adequately monitor the Captain's flawed conduct of the approach was highlighted.

On 17 May 2015, an Airbus A300-600 (EP-MNI) being operated by Mahan Air on an international passenger flight from Tehran International to Yerevan, Armenia as IRM 1150 touched down at destination after a non-precision approach conducted in day VMC just ahead of a notified displaced threshold. Minor damage occurred to the aircraft main landing gear wheels and to two of the elevated displaced threshold lights when the latter were hit by the wheels but the 211 occupants were not injured.

It was established that the required dry runway landing distance for the aircraft at the ELW of 130 tonnes using 40° flap and autobrake set to low had been 2,260 metres, which was within the temporarily reduced declared landing distance available of 2,400 metres. This reduction in the declared distance from the full length of 3,850 metres had been the subject of NOTAM action advising that it was due to runway repairs. This notification also included the information that the ILS and PAPI for runway 09 would be unavailable for the duration of the work and that the VOR/DME approach would be amended to reposition the start of descent from the FAF at 5,100 feet QNH nearer to the runway in order to ensure that aircraft following the procedure reached the displaced threshold. The 1,450 metres of out of use runway was appropriately marked, the approach lighting had been continued part way along it using elevated temporary lights and the position of the displaced threshold was also lit.

Based on the recorded flight data, the sequence of the approach was reconstructed. During the descent towards the destination, Yerevan ACC advised the crew that they could expect radar vectoring towards a VOR/DME approach to runway 09. When the crew then queried the serviceability of the ILS for the same runway, they were advised that it was out of service. Once transferred to Approach Radar, the controller, in accordance with the NOTAM about the displaced threshold, advised the crew of this and that the displacement was of 1,450 metres. Descent to the runway at 2,800 feet QNH was commenced from 5,100 feet QNH at 8 DME, the normal FAF position for this procedure since the Captain was unaware of the revised procedure and was referring to the normal approach chart on his personal iPAD. The descent was thus commenced approximately 1 nm too early with AP1 and both FDs engaged and the A/T in SPEED Mode. Transfer to TWR was made and the flight had been cleared to land when about 6 miles out and at about 3,500 feet QNH (equivalent to 700 feet aal), the controller transmitted that the aircraft was well below the appropriate vertical profile. The crew replied that they were "approaching visual with the new threshold in sight" and the controller immediately responded to this with an instruction to "stop descent" which was acknowledged and the AP disconnected and the rate of descent arrested. The aircraft was about 3½ nm from where touchdown would subsequently occur and at about 630 feet aal. As the runway was approached and with the aircraft at 50 feet agl, the A/T was disconnected and 11 seconds later, a touchdown was made with the main wheels on the closed section of the runway just before the displaced threshold and they then hit the temporary runway threshold lights. The nose wheels subsequently touched down on the correct side of the displaced threshold after which the aircraft continued slowing to taxi speed before clearing the runway via taxiway 'C'.

The Captain subsequently stated that he had "not recognised" the temporary elevated approach lights installed along the closed section of the runway and had concentrated instead on the (also elevated) temporary threshold lights. 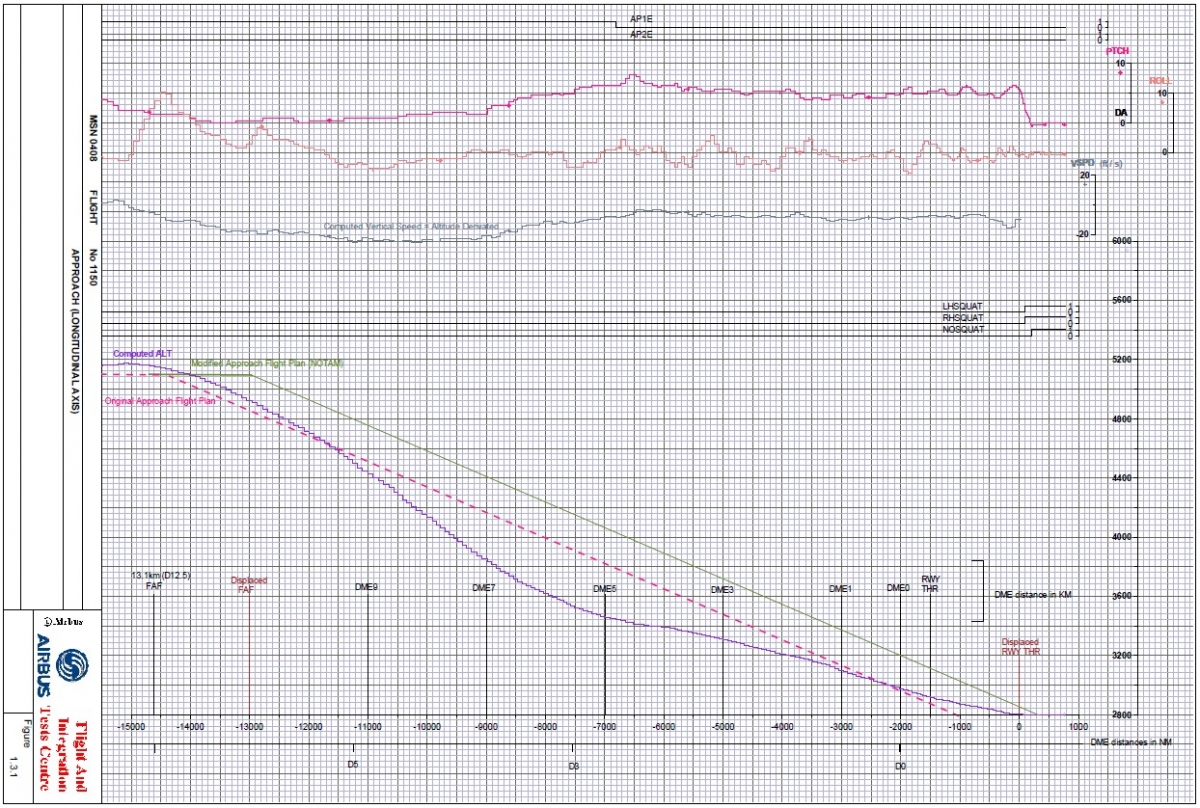 The final approach vertical profile as flown compared with the normal and NOTAM'd approach. [Reproduced from the Official Report]

It was considered that although this was not contributory to what happened, there were not enough 'Closed' Markings on the out of use runway and had there been more, it might have helped the pilot recognise the closed part of the runway more readily. In this respect, the Recommendation in Annex14 which said that "a closed marking should be displayed on a temporarily closed runway or taxiway or portion thereof, except that such marking may be omitted when the closing is of short duration and adequate warning by air traffic services is provided" was noted.

The Investigation concluded that the Main Cause of the event was the failure of the aircraft commander to review information relevant to the flight before departure in order to prepare for circumstances which would be encountered at the destination.

Two Contributory Factors were identified as:

Five Safety Recommendations were made as follows:

The Final Report of the Investigation issued on 15 July 2016.