On 16 November 2012, an Air Contractors Airbus A300 departed the left the side of the landing runway at Bratislava after an abnormal response to directional control inputs. Investigation found that incorrect and undetected re-assembly of the nose gear torque links had led to the excursion and that absence of clear instructions in maintenance manuals, since rectified, had facilitated this. It was also considered that the absence of any regulation requiring equipment in the vicinity of the runway to be designed to minimise potential damage to aircraft departing the paved surface had contributed to the damage caused by the accident.

On 16 November 2012, an Airbus A300 (EI-EAC) being operated by Air Contractors on a scheduled cargo flight from Leipzig to Bratislava for DHL left the side of runway 22 at destination shortly after touching down off an Instrument Landing System (ILS) approach in normal night visibility. The nose landing gear collapsed on impact with an obstruction and the aircraft came to a stop soon afterwards, having sustained significant damage but with the three operating crew members uninjured. 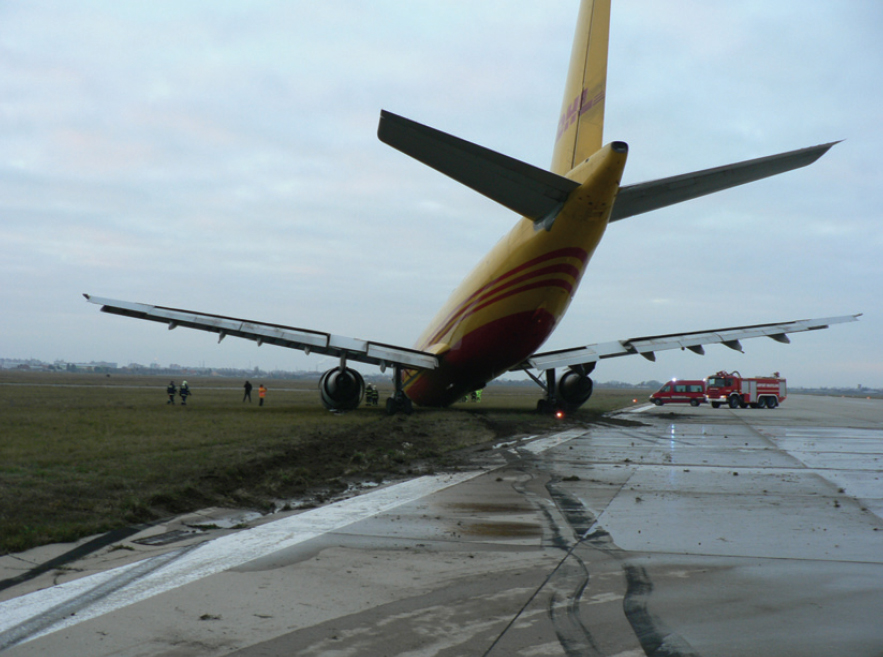 The event was investigated by the French Bureau d'Enquêtes et d'Analyses (BEA). Recorded data from both the Cockpit Voice Recorder (CVR) and Flight Data Recorder (FDR) were successfully recovered and evidence that a malfunction of the nose landing gear diminishing its normal function was found on site.

It was established that shortly after landing on runway 22, strong vibrations began which increased as the groundspeed dropped. The aircraft began to veer left and the aircraft commander acting as PF was unable to obtain normal response to directional control inputs. He stated that it had not occurred to him to use differential braking as a means to keep the aircraft on the runway because “the sequence (of events) occurred so quickly.” At a groundspeed of 45 knots, the aircraft had departed the left side of the runway and shortly after this, the Nose Landing Gear (NLG) had hit a concrete inspection pit and collapsed. After skidding for 30-40 metres, the aircraft had then come to a stop after travelling approximately 400 metres since the position where the first vibrations had been apparent.

It was found that the nose landing gear torque links had been removed and subsequently re-installed during defect rectification work some 26 days earlier, since when the aircraft had made 37 flights. It was found that the re-installation had been carried out incorrectly and that some details of the task in the Aircraft Maintenance Manual were incomplete to the extent that they could have contributed to the error made.

It was noted that three years earlier, Airbus had advised European Aviation Safety Agency (EASA) of two similar incidents, one to an A300-600 and one to an A310 which had not led to a runway excursion, but on the grounds that the NLG steering is only relevant below 70 knots groundspeed and that, in the event of malfunction, differential braking can be used in its place, EASA had decided that this type of event “had no impact on the airworthiness of the aircraft”.

In respect of avoidable damage to aircraft leaving the paved surface, it was noted that “the BEA accident database contains four lateral runway excursions that occurred in France during which either the nose or main landing gear had collapsed after an impact with a concrete inspection pit that was on the ground surface.” Reference to mitigation of the potentially damaging effects of obstructions on runway strips in both Supplement ‘A’ to ICAO Annex 14 Aerodromes, Volume 1 ‘Design and technical operation of aerodromes and in the ICAO Aerodrome Design Manual (Doc 9157) was noted. The likelihood that EASA “should, during 2013, make a rule integrating the points from Annex 14 mentioned” was also noted.

The formally stated Conclusion of the Investigation was as follows:

Incorrect installation of one or more washers on the nose gear torque link centre hinge made it impossible to lock the hinge shaft nut effectively. The unscrewing and the detachment of the latter in service caused the loss of nose gear steering. Free on its axle, the nose gear bogie began to shimmy, which made the aeroplane veer to the left. The aeroplane exited the runway and the nose gear collapsed during the collision with a concrete inspection pit for access to the runway lighting electric cables.

The runway excursion was due to the incorrect and undetected re-assembly of the nose gear torque links.

Despite the presence of a detailed diagram, the absence of clear and detailed instructions in the text of the manufacturer’s AMM, allowing the operator to ensure that the assembly was correct, contributed to the incorrect assembly.

The failure of the nose gear was due to the collision with an obstacle in the runway strip. The absence of any regulation requiring that equipment in the immediate vicinity of a runway or of a runway overrun area be designed so as to limit as much as possible any damage to aeroplanes, in case of a runway excursion, contributed to the accident.

Safety Action taken by Airbus and reported to the Investigation included the provision to operators on 3 April 2013 to A300/A300-600/A310/AST operators of recommendations on the maintenance of the nose gear steering torque link assembly, in particular the importance of correct assembly of the washers on the nose landing gear (NLG) torque link centre hinge. This communication advised that a corresponding amendment would be made to section 32-21-15 of the Aircraft Maintenance Manual at the next revision. It is understood that the NLG Original Equipment Manufacturer (OEM), Messier-Bugatti-Dowty also intends to similarly amend the CMM.

After initial publication in French in September 2013, the Final Report in English Translation was published the following month. No Safety Recommendations were made.