On 16 May 2018, an Airbus A310 and a Cessna 421 being positioned for ILS approaches to adjacent parallel runways at Montréal by different controllers lost separation. One controller incorrectly believed that he had transferred control of the Cessna to the other when the shift supervisor re-opened a sector which had been temporarily combined with his. The Investigation attributed the conflict to multiple deviations from standard procedures, memory lapses relating to controller information exchange of information and a loss of full situational awareness compounded by the shift supervisor also acting as an instructor whilst being distracted by his other duties.

On 16 May 2018, prescribed vertical and horizontal separation was lost in day VMC between an Airbus A310 (C-GFAT) being operated by Air Transat on an instrument flight rules flight from Toronto to Montréal as TSC485 and a privately-operated Cessna 421 (C-GADG) on an IFR flight from Trois-Rivières to Montréal as both were being positioned to ILS approaches on adjacent parallel runways, minimum separation being 500 feet and 1.7 nm as both were being turned away from each other by different sector controllers.

An Investigation was carried out by the Canadian Transportation Safety Board (TSB). Sufficient relevant recorded data and testimony was available to enable a detailed reconstruction of the events leading up to the loss of separation. It was noted that the visibility had been good and there had been no cloud below 10,000 feet so that the prevailing weather conditions had played no part in the investigated event.

It was established that for operations with runways 24L and 24R in use, the Class ‘C’ airspace of the Montréal TMA had six sectors and for the time of day when the conflict under investigation occurred, staffing guidelines specified 7 controllers and 1 supervisor should have been on duty but this was down to 4 controllers and a shift supervisor, together with one trainee controller. Three of the four controllers on duty were controlling and the fourth was on a break. One of the controllers became unwell and their position was temporarily combined with another until re-opened by the supervisor, who had then taken on the role off instructor and the trainee instructor had taken over the position. The 6 sectors are shown on the illustration below.

The initial sector combinations were the North Departures (DN) controller also responsible for the South Departure (DS) and Satellite (SA) sectors and the North Arrivals (AN) controller also responsible for the South Arrivals (AS) sector. The Low Arrivals (LO) sector was not combined and it was this one where the controller became ill and had to leave the operations room. At that point, the sector was added to the North Arrivals (AN) position in addition to the South Arrivals (AS) sector until, after 17 minutes, the Shift Supervisor reopened the LO sector control position and after the trainee controller had observed the traffic and been briefed, he took over the position with the shift supervisor as his OJI (on-the-job training instructor). 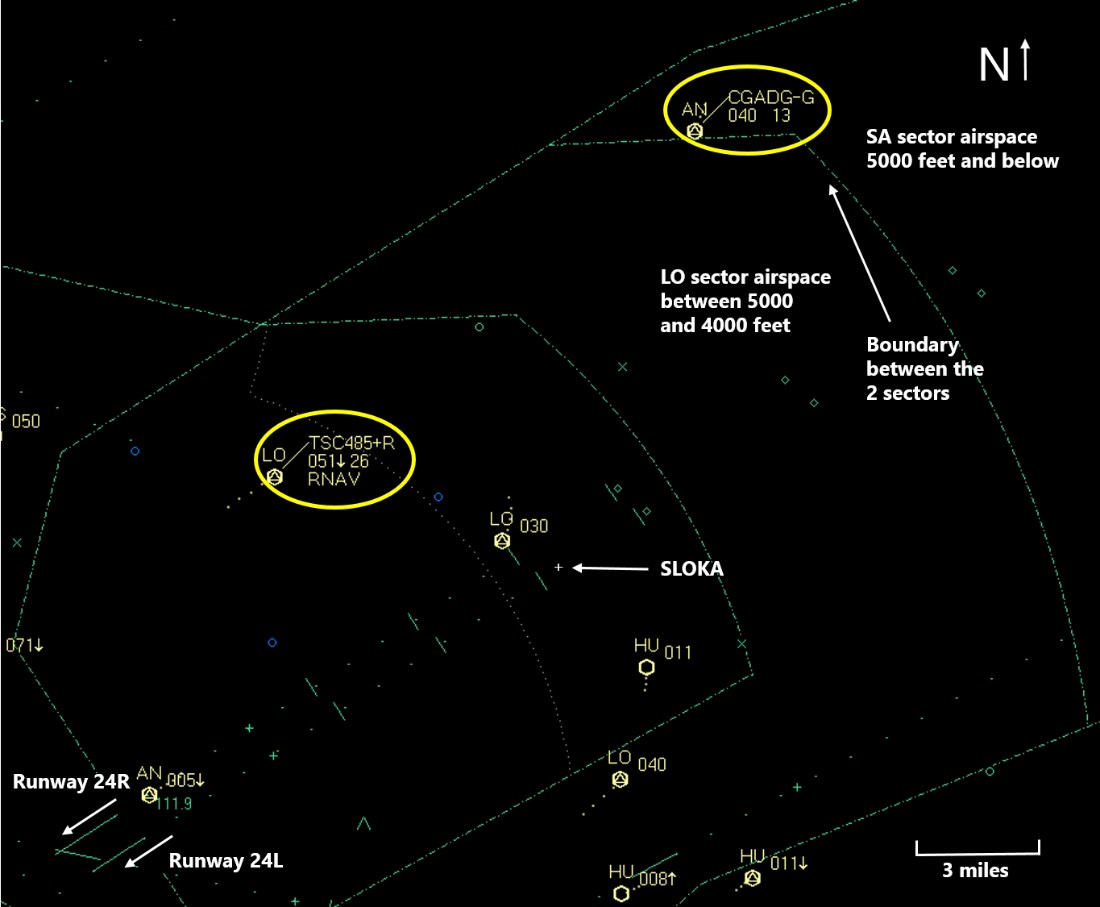 Montréal Terminal Arrival Sectors when runways 24L and 24R are in use. [Reproduced from the Official Report]

The Development of the Conflict

Six minutes after the LO sector controller had become ill, the controller responsible for the ACC Rawdon sector to the northeast of the DN sector (see the illustration above) and who was working the Cessna 421, contacted the DN controller to coordinate transfer of that aircraft and was told that transfer should be direct to the LO sector which was immediately corrected to the AN sector with which the LO sector was now combined. The DN controller then advised the AN controller of this arrangement and although the aircraft would not enter the AN sector for some time, this was agreed and transfer of responsibility for the aircraft from the Rawdon sector was accepted shortly afterwards. The Cessna 421 made contact when 45 nm northeast of the airport and level at 4,000 feet. The AN controller confirmed that the approach would be an ILS to runway 24L and cleared the aircraft to fly direct to a waypoint located 11.9 nm from touchdown on the ILS final approach track (FAT). About a minute later, the A310, which was approximately 36 nm west of the airport and passing 16,700 feet for 8,000 feet contacted the AN controller and was advised to expect runway 24R.

Two minutes later, the shift supervisor reopened the LO sector position having received a handover briefing from the AN controller which included reference to the Cessna 421 which was at 4,000 feet still 37 nm northeast of the airport and about to enter the DN sector through which it would pass before reaching the LO sector. As it did so, 34 nm northeast of the airport, the A310 was 18 nm west of the airport still on a STAR right hand downwind leg for runway 24R and descending through 11,900 feet for 8000 feet. After re-clearance to 6,000 feet, the flight was transferred to the LO sector, where the trainee controller supervised by the shift supervisor, had just taken over the position. His briefing from the shift supervisor had included the A310 but not the C421, which by that time was no longer visible on the radar display as its range had been reduced, although the trainee controller reported having noticed it on the wider range display in the DN sector but under AN sector control responsibility. When the A310 checked in on the LO sector frequency passing 6,700 feet for 6,000 feet and 6 nm north northwest, the trainee controller re-cleared the flight to 4,000 feet. Ninety seconds later, with the A310 still on a downwind track and now 10 nm northeast of the airport, the Cessna 421 entered the LO sector level at 4000 feet on a direct south westerly track towards the SLOKA waypoint - see the recorded radar display at that point below. 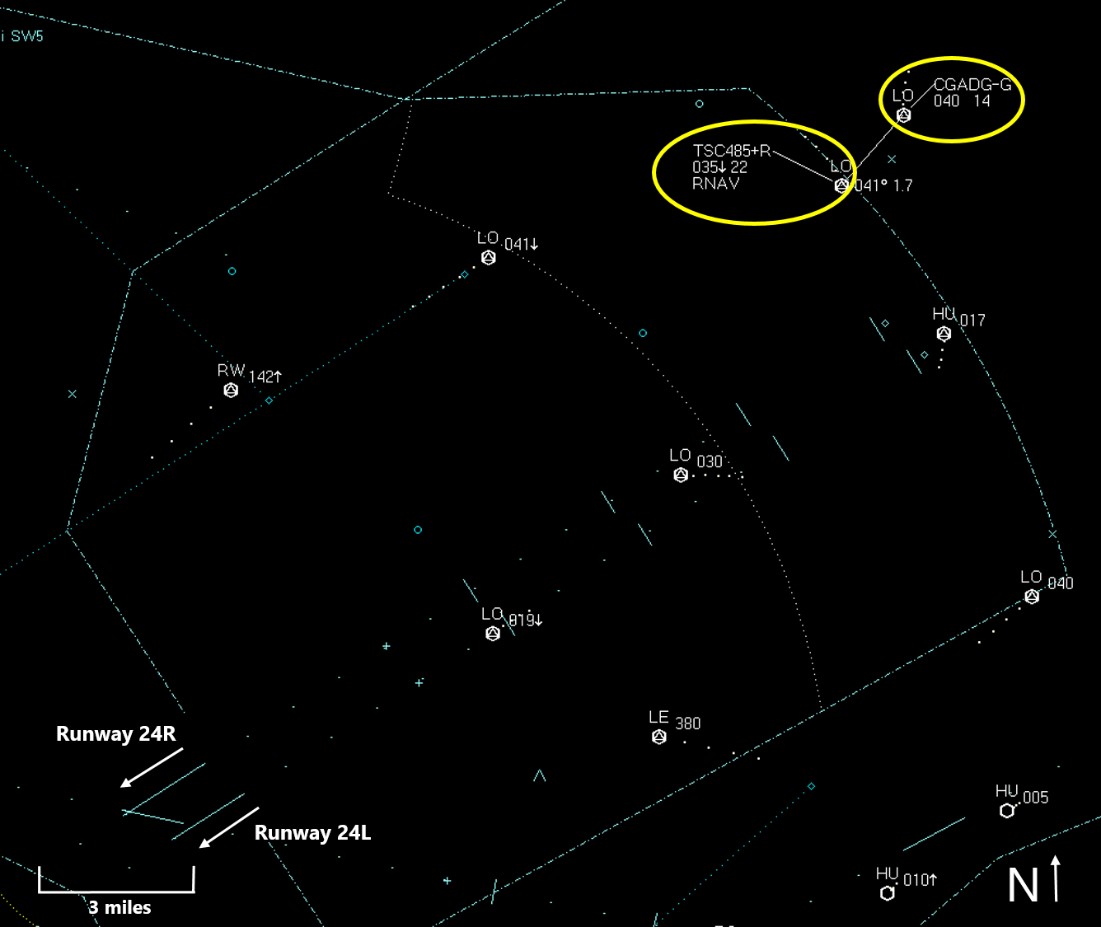 The recorded radar picture as the C421 entered the ‘LO’ sector. [Reproduced from the Official Report]

Soon afterwards, the A310 was instructed to make a right turn onto a base leg heading of 150°and re-cleared to 3000 feet, after which the trainee asked the OJI about the Cessna 421 which had entered the LO sector and which was now 6.4 nm from the A310. There was no response to a call made to the Cessna 421 by the OJI and he asked the AN controller to get its pilot to call the LO sector. Almost immediately however, the C421, now just 3.6 nm from the A310 as the latter continued its right turn onto base leg passing 3,900 feet, called the AN controller. A few seconds later, lateral separation between the A310 and the C421 was lost as the C421 closed to within 2.8 nm of the A310 with only 200 feet of vertical clearance. The AN controller instructed the C421 to turn left onto 150° followed five seconds later by an instruction to turn further left onto 100°. A further five seconds showed that whilst the two aircraft were only 2.2 nm apart, vertical separation was continuing to increase as the A310 continued its descent to 3000 feet whilst the C421 remained at 4000 feet. The AN controller advised the C421 pilot that the A310 was approximately one mile ahead in a relative 1 o’clock position and descending though 3,500 feet and received the response that this aircraft was in sight. It was established that minimum lateral separation had been 1.7 nm when at 500 feet vertically as the A310 was in a right turn and below the C421 which was in a left turn - see the recorded radar display at that point below. The minimum prescribed separation was established 36 seconds later after the C421 had been transferred to the LO sector and the A310 to APP and both flights were completed without further event. 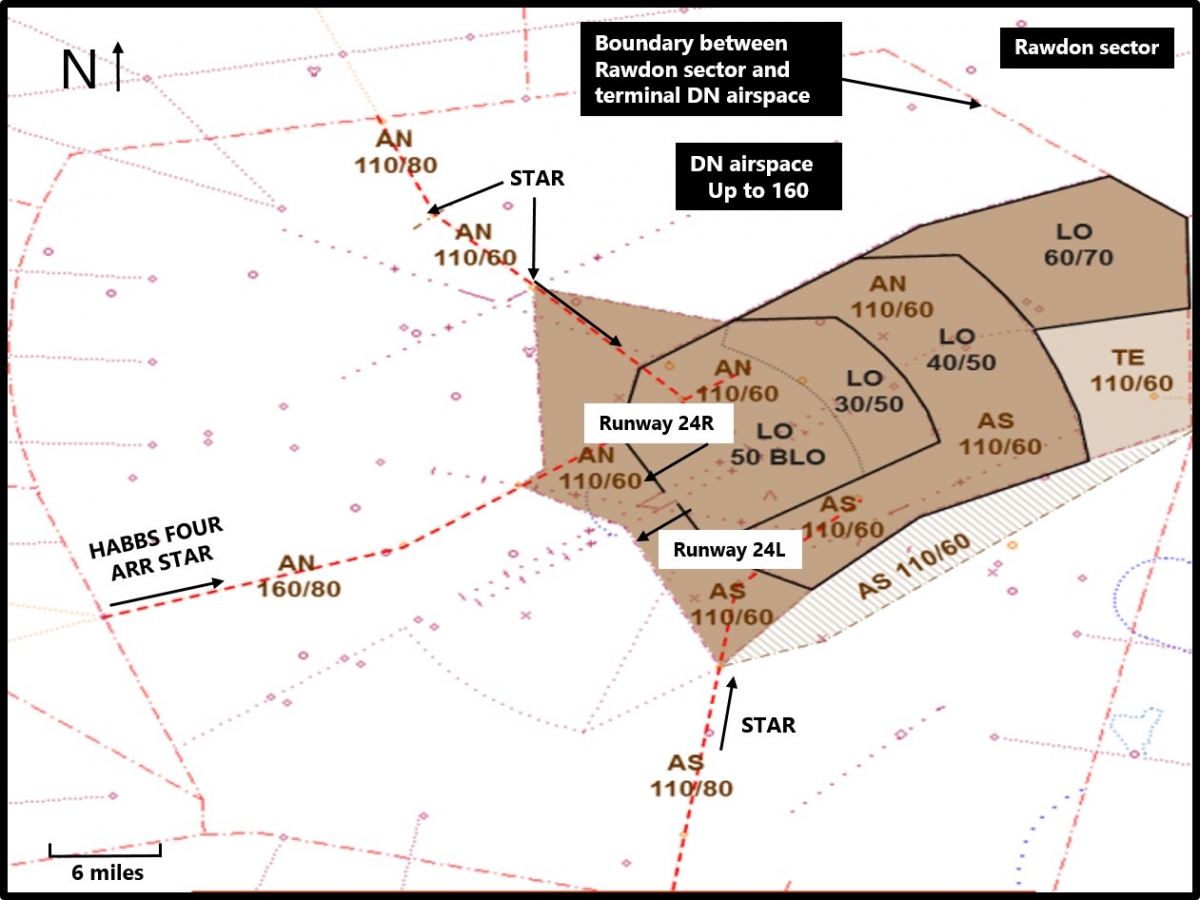 The recorded radar picture with the two aircraft 1.7nm and 500 feet apart both turning. [Reproduced from the Official Report]

It was noted that no TCAS alert was activated on the A310 in respect of the C421 and that the latter was not fitted with a transponder. The A310 transponder in use at the time was subsequently confirmed as serviceable and it was found that the C421 did not have, nor was it required to have, a TCAS installed. It was also noted that the prevailing weather had not been a factor in the occurrence and that no evidence indicating that controller fatigue had been a factor had been found.

However, concerns in respect of procedures were identified with the transfer of both control responsibility and position responsibility prior to the conflict and also with the shift controller’s failure to exercise his responsibilities as an Instructor with sufficient diligence, the latter being considered partly a consequence of distraction attributable to his supervisory responsibilities.

It was noted that the TSB was “not aware” of any Safety Action taken as a result of the investigated event whilst the Investigation was in progress.

The Final Report of the Investigation was authorised for release on 3 June 2019 and it was officially released on 10 July 2019. No Safety Recommendations were made.