On 10 June 2008, a Sudan Airways Airbus A310 made a late night touchdown at Khartoum and the actions of the experienced crew were subsequently unable to stop the aircraft, which was in service with one thrust reverser inoperative and locked out, on the wet runway. The aircraft stopped essentially intact some 215 metres beyond the runway end after overrunning on smooth ground but a fuel-fed fire then took hold which impeded evacuation and eventually destroyed the aircraft.

On 25 March 2008 an Airbus A310 being operated by Sudan Airways on a passenger flight from Port Sudan to Khartoum overran the runway after a late night touchdown at destination in normal visibility off a non precision approach to runway 36. A fire became evident once the aircraft had stopped and this subsequently burned out of control and destroyed the aircraft. 30 of the 214 occupants died because of the fire and related smoke but no record of the extent of injuries to the survivors was available to the Investigation.

An Investigation was carried out by the Sudan Air Accident Investigation Central Directorate (AAICD). The Flight Data Recorder (FDR) and Cockpit Voice Recorder (CVR) were recovered and downloaded. It was found that both pilots were experienced and that the Captain had been PF for the accident landing.

It was noted that the aircraft had been released to service the previous day with the left engine thrust reverser inoperative and locked out in accordance with the Minimum Equipment List (MEL). It was also discovered that no regular checking of tyre pressures was taking place because the maintenance personnel wrongly believed that the aircraft was fitted with an on-board “Tyre Pressure Information System” (TPIS) which would have meant that the flight crew could be responsible for routine monitoring. However, no evidence was found that this circumstance had had any effect on the difficulty experienced in stopping the aeroplane.

The approach to runway 36 at Khartoum was made using the VHF Omnidirectional Radio Range (VOR)/Distance Measuring Equipment (DME) procedure because the Instrument Landing System (ILS) was awaiting calibration. The approach was stable and the final wind check given by the TWR was 320° / 7 knots, which was the Meteorological Terminal Air Report (METAR) wind velocity reported almost an hour before touchdown since when the direction had varied considerably and slowly increased so that by the time the aircraft landed “the actual tailwind component was 15 knots”. It was found that at the time of the accident “there were no wind panel indicators in the tower for providing current wind velocity to arriving and departing traffic”. A review of weather observations showed that a thunderstorm with rain had recently cleared the aerodrome area and it was dry by the time the aircraft landed although the runway remained wet.

FDR data showed that touchdown occurred on the main gear at 1.1g between 850 metres and 900 metres from the threshold of the 2981 metre long runway at a ground speed of 155 knots with immediate auto spoiler deployment. One set of spoilers was found not to have deployed when the system was activated but this was found, after a simulation based on the runway being “covered with water”, to have been the source of only 5 knots additional speed at overrun. Significantly, auto braking had not been selected. Manual selection of reverse thrust (right side only operative) followed five seconds later but “the aircraft skidded to the right after the thrust reverser was applied“ and 10 seconds after touch down, the deployed reverser was stowed and the thrust levers were set to idle, with differential braking used to regain the centreline. With 780 metres to go before the end of the runway and the aircraft still at a groundspeed of 109 knots, the Captain had switched off the anti-skid and applied full braking on both pedals which led to the wheels locking. The aircraft left the runway 36 seconds after touchdown at a groundspeed of 76 knots and continued for a further 215 metres before coming to a stop. Apart from damaging some ground lighting, the aircraft did not encounter any significant obstacles or uneven terrain and came to a stop essentially intact and with all three landing gear assemblies still supporting the aircraft. 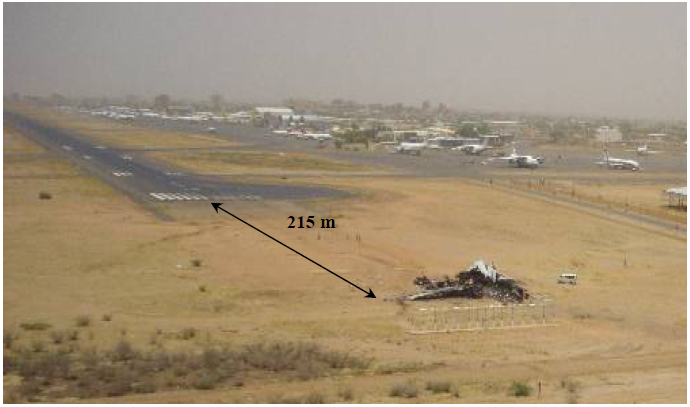 Fire only became evident in the area of the inner right wing after it had stopped and, since the vertical and horizontal accelerations recorded during the overrun were considered to be insufficient to prejudice structural integrity, it was concluded that the origin of the fire was “very likely due to a fuel leakage between the right engine nacelle and the right wing root.” It was considered by the Investigation that this indicated that:

In respect of the latter possibility, it was noted that “Airbus recommends stowing the thrust reversers at low speed so as to avoid any debris-caused problems.”

Simulations conducted during the Investigation indicated if the wind velocity given to the crew by ATC on short finals had been representative of the actual wind then, despite the late touchdown, it should still have been possible to stop the aircraft on the runway provided braking had been applied throughout. The simulations also showed that the runway friction coefficient was poor which indicated that the runway surface was very slippery. Even though the crew had been informed that the runway was wet, “the Captain decided not to switch the auto brake on, which is strongly recommended by the flight manual”.

The Investigation also reviewed the conduct of the evacuation and considered that, whilst the outcome had been largely successful, the manner in which it was ordered and conducted had indicated opportunities for improvement. The aircraft Captain stated that the evacuation had been difficult because of the speed at which thick smoke spread through the cabin and the need to use only the left side exits. He noted that the left rear exit (door 3L) could not be used because the height above the ground was too great but noted that although the slide at the over wing exit (2L) was deployed, a lot of passengers used the left forward exit (door 1L) to evacuate,

After carrying out interviews with the Cabin crew, the Investigation concluded that:

The Investigation concluded that the response by the Airport Rescue and Fire Fighting Services was inadequate and that this was due to poor training as well as to “communications (and) infrastructure issues”. It was considered that whilst the number of airport fire fighting and rescue vehicles was sufficient it was found that there had been an “acute shortage in fire fighting personnel” and no means of communication between personnel at the accident site and the fire station. It was also considered that “the response time was not in accordance with the standard” and that “participation of civil defence fire vehicles in fighting the crash fire (had) impaired the efficiency of airport fire and rescue vehicles”. It was noted that “the officers of the airport RFFS were not permanently appointed to their posts and that the Officer-in-charge “appeared to have little experience in aircraft accident fire fighting”.

The Investigation concluded that the Cause of the accident was:

“ The long flaring distance (900 meters from R/W threshold) on a wet slippery runway without selecting Auto brake and with one deactivated engine reverse in such rainy conditions. The remaining available landing distance turned out to be too short to allow the captain to stop the aircraft before the end of the runway.”

And that the Contributing factors were that:

Sixteen Safety Recommendations were made as a result of the Investigation: