On 5 March 2008, an Air Transat A310-300 was unintentionally mishandled by the flight crew during and shortly after departure from Quebec and effective control of the aircraft was temporarily lost. Whilst it was concluded that the origin of the initial difficulties in control were a result of confusion which began on the take off roll and led to a take off at excessive speed followed by subsequent mismanagement and overload, the inappropriate steep descent that followed was attributed to the effect of somatogravic illusion in respect of aircraft attitude control in conjunction with a singular focus on airspeed.

On 5 March 2008, an Airbus A310-300 being operated by Air Transat on a passenger flight from Quebec to Montreal in day Instrument Meteorological Conditions (IMC) being used for line training was unintentionally mishandled by the pilot under supervision during and shortly after departure and effective control of the aircraft was temporarily lost. After recovery from a steep high speed descent, PAN status was declared and subsequently cancelled and the flight proceeded without further event to the intended destination. There was no damage to the aircraft and there were no injuries to the 98 occupants.

An Incident was initially mis-reported by the Operator to the Canadian TSB as “a significant loss of altitude and overspeed due to wind shear”. No structural damage or system defects had been found to the aircraft during inspection after flight. However, despite the fact that a more detailed examination of the event then led to the elimination of wind shear as a factor, the TSB was not advised and the start of the eventual TSB Investigation was therefore delayed with “loss of information that could have helped determine the crew’s actions and the circumstances surrounding the incident”.

The Flight Data Recorder (FDR) recording was available but the 30 minute Cockpit Voice Recorder (CVR) had been overwritten and provided no relevant information. It was established that the flight was a supervised flight which was intended to form part of the aircraft commander's ETOPS authorization. The supervising Training Captain was occupying the right hand pilot seat as co pilot and PM.

The take off had been made at a very light weight from a contaminated runway 06 in low visibility conditions. The visibility would not have met the minimum requirements for the PF to operate as aircraft commander because he had only recently qualified as a Captain on the type. During the take off roll, the headset of the PM became temporarily disconnected and the Vr call was not made. As a result, rotation did not occur until 182 KIAS instead of the calculated 138 KIAS. The light aircraft weight, prevailing headwind component and the effect of full thrust required and used for the contaminated runway state meant that the calculated Vr was reached only 17 seconds after the start of roll.

FDR data showed that the aircraft had initially climbed as cleared to 3000 feet QNH but with an extreme rate of climb which reached 6300 fpm and a pitch attitude which reached 19°. It was considered that this was partly a result of a lack of take off thrust reduction and premature flap retraction during the climb. To achieve a level off whilst flying manually, the PF had used the electric trim and the aircraft had stopped climbing at 3100 feet QNH before beginning a descent back to the cleared altitude. However, by this point, a significant out of pitch trim condition had developed and the aircraft had begun to descend, passing 3000 feet at 230 KCAS with a rate of descent of about 2000 fpm. The PM warned the PF that the aircraft was in a nose-down attitude but descent continued and speed increased. The PF ignored the descent but retarded the throttles so as not to exceed Vfe (maximum velocity flaps extended) but in doing so inadvertently pressed the ‘Go Levers’ which set TOGA thrust. Within a second of this activation, the slats began to retract and as soon as the PF let go of the throttles, they advanced. Speed continued to increase and the Training Captain made a second alerting call but, in the absence of corrective action, then announced that he was taking control.

The recovery to the intended climb was initiated by disconnecting the A/T and rapidly reducing thrust to 45 per cent. The Vmo (maximum operating speed) of 340 KIAS was exceeded just before the slats reached full retraction and the first overspeed warning was annunciated. The aircraft speed and rate of descent continued to increase, the latter to 3900 fpm. At approximately 1450 feet agl, the Terrain Avoidance and Warning System (TAWS) activated a Sink Rate alert for four seconds and simultaneously, at a speed of 345 KCAS, a second overspeed warning began and continued for the next 30 seconds. Further activation of the EGPWS occurred over 8 seconds with successive alerts of "Don’t Sink", "Terrain" and "Sink Rate", the "WHOOP WHOOP PULL UP" Warning and, finally, a "Too Low Terrain" Alert. A minimum height of 995 feet agl was reached before the aircraft could be transitioned to a climb back to 3000 feet QNH during which the Vmo of 370 KCAS was reached.The total time in descent time was found to have been 54 seconds.

As the aircraft climbed, the crew, still on the departure TWR frequency, transmitted a ‘PAN PAN’ call advising that ‘there was as a small problem on board’ and requesting continued climb to 10,000 feet which was approved. Once the flight crew were confident that there was no ongoing control problem, PAN status was cancelled. An inspection of the aircraft after completion of the flight did not find any structural damage or other defects.

Overall the Investigation concluded that “the loss of pitch control occurred as a result of an abnormal take-off, a climb in which the aircraft’s performance was unusual, missed standard calls that were out of sequence, incorrect flight control adjustments, inadvertent engagement of the Go Levers, inaccurate situational awareness and a lack of application of the recommended procedure for pitch control difficulties”.

It was also considered that “although the Captain pulled the control column with constant force as soon as the descent started, he did not recognize the aircraft’s out-of-trim condition”. In this context, it was noted that pilots normally use the electric trim intuitively to cancel any control column force being held manually. It was concluded that the prevailing workload may have overloaded the PF and contributed to his inaction in respect of pitch trim.

In seeking a likely explanation for the failure of the PF to react to the out of trim descent condition that was the culmination of the initial high workload phase created by their own actions, the Investigation concluded that the singular focus of the PF on the increasing airspeed indication as the aircraft descended to the exclusion of any attention to the ADI was symptomatic of Somatogravic Illusion. The discussion of this subject in the Official Report was as follows:

“Somatogravic Illusion occurs in conditions of poor visibility or in darkness when there is an absence of visual cues. Instrument-rated and experienced pilots are not immune to this illusion, which is a subtle and dangerous form of disorientation. The illusion occurs because the body relies on sense organs in the inner ear to maintain balance and, in the absence of visual cues, signals from these organs can produce a very serious disorientation. When the aircraft is accelerating, the sense organs of the inner ear of the pilot send a signal to the pilot’s brain that is interpreted as tilting backwards instead of accelerating forward. If the aircraft nose is simultaneously raised, the pilot has a very strong sensation of climbing. The illusion of false climb tends to lead the pilot to lower the nose and descend. The aircraft then accelerates and the illusion can intensify. Pilots cannot rely on their senses and must confirm the aircraft’s nose-up position using the attitude indicator on the PFD.” 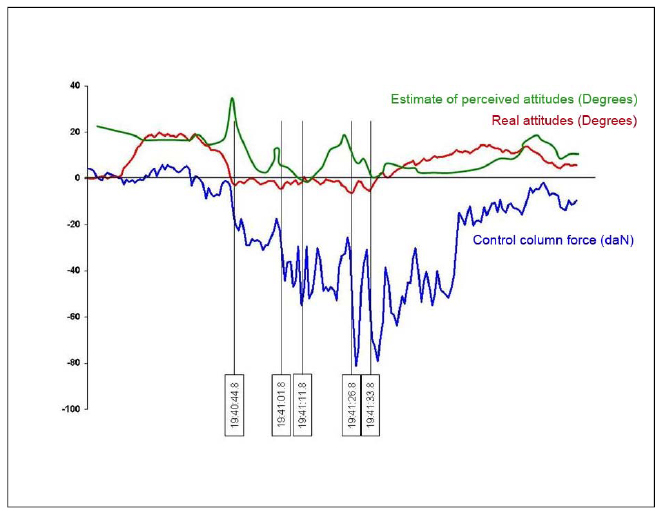 Somatogravic Illusion during descent – reproduced from the Official Report

Although it had no bearing on any aspect of the incident, it was noted that PAN calls are “rarely used in North America” where “declaring an emergency” is the more usual way of alerting ATC to an aircraft problem.

The formally stated findings of the Investigation in respect of Causes and Contributing Factors were as follows:

Formal findings of the Investigation related to Risk were as follows:

Other Findings as a result of the Investigation were that:

Safety Action taken by Air Transat, ANSP Nav Canada, and A310 full flight simulator manufacturer was noted. The CAE action was to confirm and plan rectification to software in up to ten A310 simulators on respect of the modelling of the force gradient in the pitch control artificial feel unit.

The Final Report of the Investigation was authorised for release by the TSB on 05 November 2010. No Safety Recommendations were made.