On 12 July 2000, a Hapag Lloyd Airbus A310 was unable to retract the landing gear normally after take off from Chania for Hannover. The flight was continued towards the intended destination but the selection of an en route diversion due to higher fuel burn was misjudged and useable fuel was completely exhausted just prior to an intended landing at Vienna. The aeroplane sustained significant damage as it touched down unpowered inside the aerodrome perimeter but there were no injuries to the occupants and only minor injuries to a small number of them during the subsequent emergency evacuation.

On 12 July 2000, an Airbus A310 being operated by Hapag Lloyd on a non scheduled passenger flight from Chania to Hannover declared an emergency due to fuel shortage and, after making an en route diversion to Vienna in day VMC, crash landed short of runway 34. None of the 151 occupants were injured during the impact but 26 suffered minor injuries during the subsequent evacuation. The aircraft was damaged beyond economic repair by the effects of the impact but there was no fire. 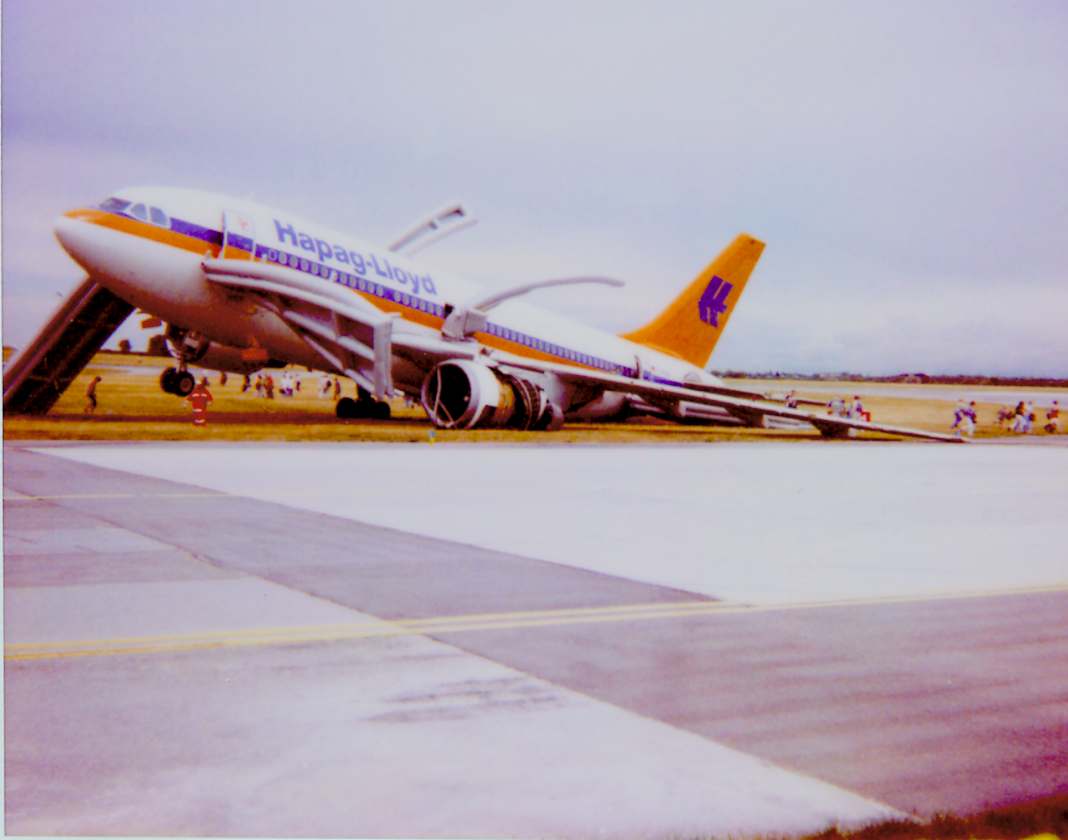 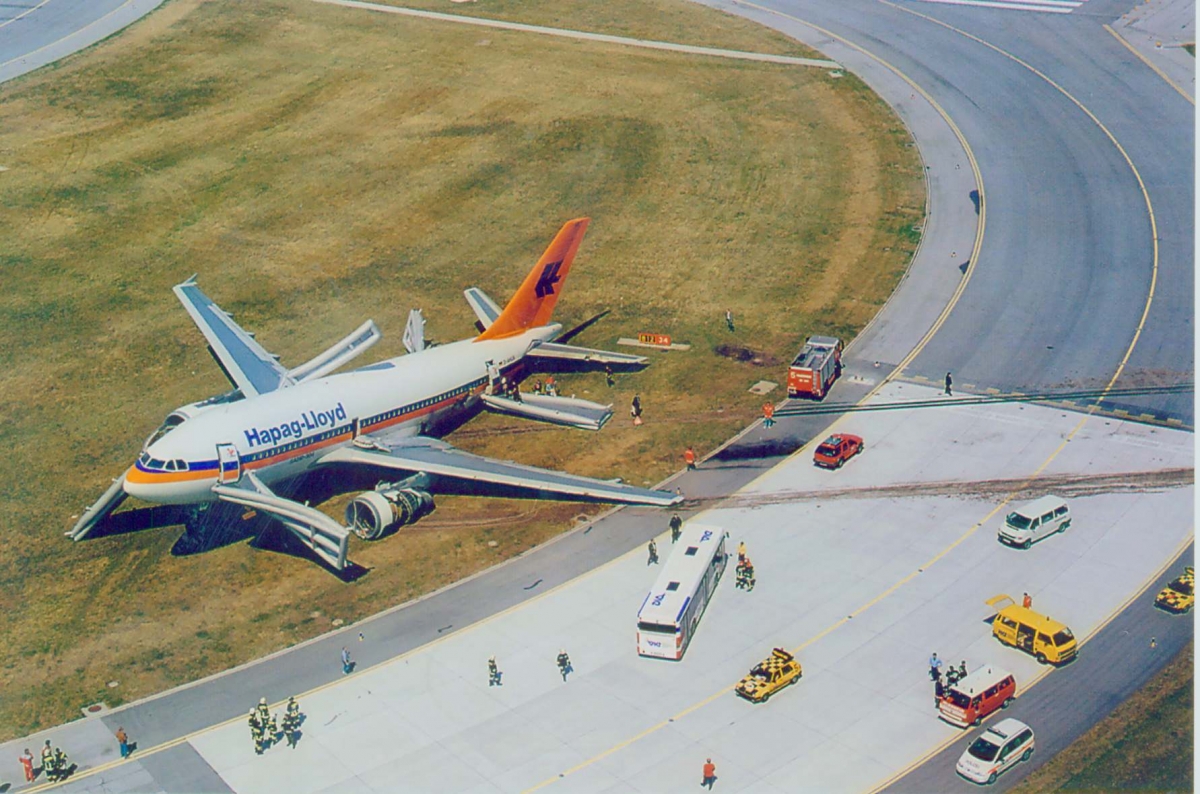 An Investigation was carried out by the Accident Investigation Unit of the Austrian Federal Office of Transport and was able to make use of recovered Flight Data Recorder (FDR) and Cockpit Voice Recorder (CVR) data.

It was established that the touchdown had been made with the landing gear locked down. The first ground contact had occurred some 660 m prior to the runway 34 threshold, slightly the right of the extended centerline and thereby avoiding the runway lighting masts. The left main landing gear collapsed soon afterwards and the aircraft had then continued to skid through a series of minor aerial and lighting obstructions before finally coming to a stop close to the southernmost taxiway to the runway.

Fuel still on board after the crash did not leak away and was found to be equivalent to the design specification for ‘unusable fuel’. 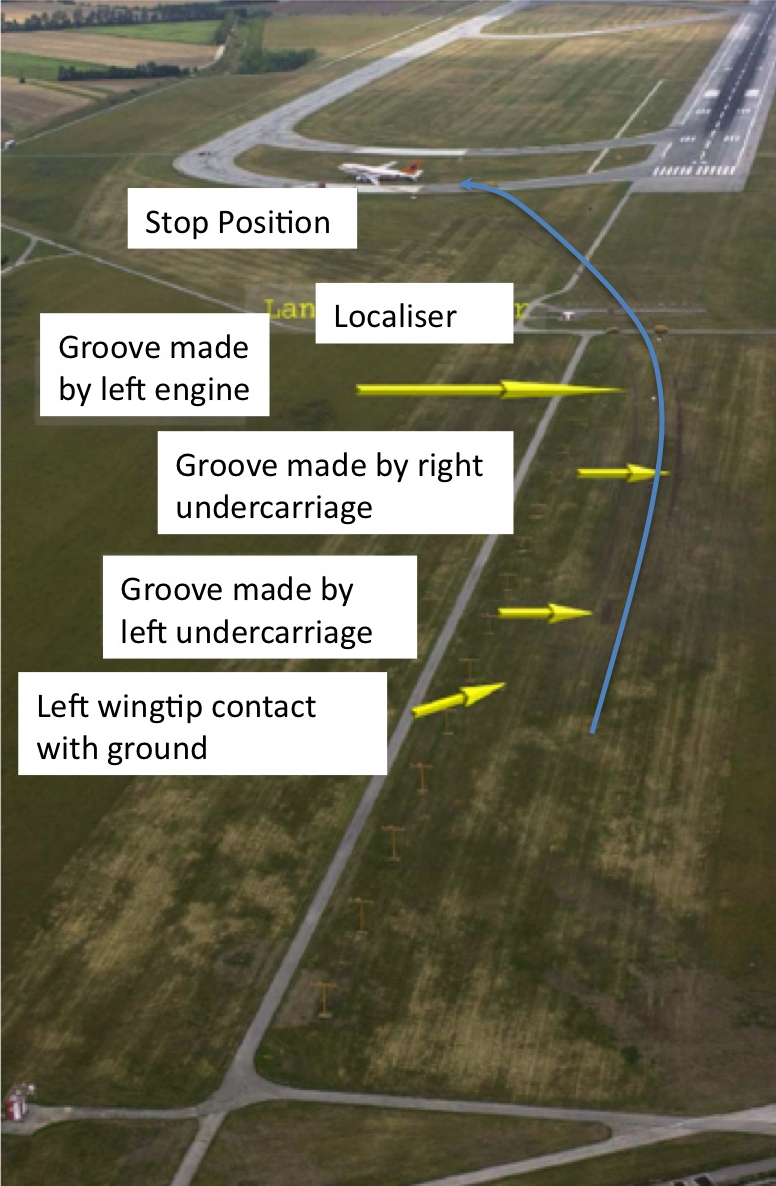 Reproduced from the Austrian Report with added labels in English

It was established that after take off from Chania with the Captain as PF, the crew had received indications that landing gear retraction had not been successful. The required ECAM actions and consultation with related ‘abnormal and emergency procedures’ followed but gear locked up could not be achieved and it had been decided that as a reduced rate of climb was not going to be a problem for the climb, the flight would continue towards the destination with the gear down and subject to monitoring of fuel use. It was recognised that the intended destination could not now be reached and various alternatives – Stuttgart (STG), Munich (MUC) and eventually Vienna (VIE) were considered in conjunction with the Company Operations Centre. Vienna ultimately became the planned diversion.

It was noted that an hour before the crash, a calculation of the expected residual fuel by the First Officer showed that it was below 1900kg, the level at which operator procedures made a diversion to the nearest suitable aerodrome. At this juncture, it would have been possible to reach Zagreb (ZAG) in 10 minutes but this was not considered. Nine minutes later, the planned diversion to Vienna was confirmed and a series of requests for direct routing began to be made to ATC. Ten minutes later, whilst still under the control of Zagreb ACC, Vienna ACC ATC were advised on box 2 that unless a direct approach could be given, the flight would need to divert to Graz, but no indication of any actual risk was communicated. The request was granted and the flight continued towards Vienna. After a further 8 minutes, the “LT-Fuel low level” warning light came on 131 nm from Vienna and six minutes after that, after earlier proposals from the First Officer to do so had been ‘deferred’ by the Captain, an emergency was declared.

Some 11 minutes prior to the eventual crash landing, it was noted that both crew members had assessed the situation as “unpromising”. Visual contact with Vienna was acquired and a visual approach to runway 34 was approved by ATC. At 11:26, both engines failed due to fuel exhaustion some 12 nm from Vienna with the aircraft intentionally positioned above the Instrument Landing System (ILS) GS profile. The crash landing occurred 8 minutes later, at 11:34.

The analysis made by the investigators particularly focused on the incomplete awareness of the flight crew on procedures for continuation of the flight with the gear down including the use of the FMS for monitoring of fuel used / remaining and on the series of decisions which led to the attempt to reach Vienna despite a progressive recognition that the fuel on board was unlikely to make this option a safe prospect.

The aircraft commander was found to have been very experienced, the First Officer was relatively new to professional flying and had obtained his A310 type rating a little over 7 months prior to the accident. The training records of both were found to be exemplary.

The organisational, physiological and psychological precursors to what happened were examined in some detail. It was suggested that “Insufficient knowledge of the basic method of operation and performance limitations of the FMS in certain situations because of a lack of documentation and training caused the pilot to incorrectly evaluate flight parameters and resulted in incorrect decisions concerning the piloting of the aircraft” and also that “Restricting the simulator training to landing gear problems on domestic flights helped produce negative training effects. On the one hand, the unilateral training scenario resulted in methodism, i.e. the creation of a standard plan to deal with the task”.

Overall, it was concluded that “The captain's decision to continue the flight to VIE rather than, as provided for in the airline's regulations, to proceed to the nearest aerodrome (which at that point was ZAG), is explained by the phenomenon called ‘pressing on’. It is often found in air accident situations, and is determined by the joint effects of the emotion components (motivation to succeed or defence against fear) and the cognitive structuring of tasks”.

The investigation also proposed that an additional reason for ‘pressing on’ to VIE was the Captain’s preference for personal ‘success’ - achieving a diversion to VIE - rather than ‘failure’ which would not have been matched by a successful diversion to ZAG. It was concluded that “the captain's decision (to continue to VIE) was based on a consideration not of the safety risks but of the likelihood of success and failure”. It was also proposed that “because of the intensive mental effort required for the landing at VIE, achieving this scenario (became) subjectively more probable than a scenario which (had) not been so carefully thought through”.

In respect of the landing gear retraction problem which had initiated the sequence of events, it was found that although a locking washer in the right landing gear actuation cylinder had been secured by its retaining nut in such a way as to prevent it turning, it had not been engaged in the rod end, which had allowed the rod to work loose. The extended working length to beyond Aircraft Maintenance Manual limits had then prevented the landing gear leg from retracting.

The Cause of the accident was formally recorded as:

and Contributory Factors as:

A total of 14 Safety Recommendations were made as follows:

The Final Report of the Investigation was issued on 21 March 2006 in the German language only. This summary is based upon a reliable but unofficial translation into the English language.