On 12 September 2020, an Airbus A318 was seriously mismanaged during a largely autopilot-controlled ILS glideslope capture from above and despite being unstabilised after the crew had intentionally ignored required approach management procedures, the flight was continued without hesitation to a landing. The Investigation found that the operator’s oversight of operating standards relating to unstabilised approaches was systemically flawed and also insufficiently supportive of their ‘Evidence Based Training’ method used for pilot training. It was also noted that the Captain involved had stated to the Investigation that “he considered this flight as a non event”.

On 12 September 2020, an Airbus A318 (F-GUGM) being operated by Air France on a scheduled domestic passenger flight from Biarritz to Paris Orly was seriously mismanaged during a largely autopilot-controlled ILS approach to destination in day VMC. Despite being comprehensively unstabilised throughout and passing the applicable ‘gate’ at 26 knots above the calculated approach speed with idle thrust set, the approach was continued without hesitation to a landing.

An Investigation was carried out by the French Civil Aviation Accident Investigation Agency, the BEA using relevant FDR and recorded ATC data. Relevant CVR data was overwritten despite the fact that the flight was arriving at one of the airline’s main operating bases.

Inbound to Paris Orly in light traffic conditions in CAVOK VMC with the Captain as PF and an ILS approach to runway 25 expected, the crew had not identified their much reduced recency as a potential consideration in their approach briefing. When, at around FL112, the controller asked the crew if they were interested in a shortened route, they replied in the affirmative. AP1 was engaged. They were then given a radar heading direct towards the Coulommiers VOR and descent to 3,000 feet QNH (see this VOR relative to the approach track subsequently flown on the annotated ground track show in the illustration below). 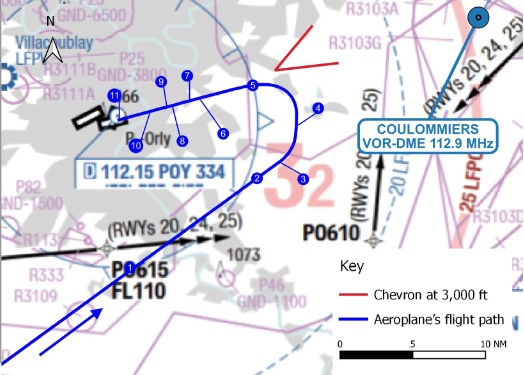 The speed was unchanged and the aircraft had just left 6000 feet. The A/THR was already in SPEED mode and APP mode and AP2 were then engaged. Passing 4,900 feet, the rate of descent was 2,200fpm with the speed brakes stowed and as the ILS LOC neared, LOC* was annunciated. Passing 3,500 feet (point 5 in the illustration) with the speed still 250 knots but now established on the ILS LOC and passing 3,500 feet with 9.1 nm to go, the aircraft was around 600 feet above the ILS GS. It was transferred to TWR with “free speed”. The speedbrakes were 50% deployed but although the crew needed to continue descent to capture the ILS GS from above, the fact that the selected altitude was 3000 feet resulted in ALT* mode engaging. This caused the engine N1s to increase from 27% to 40% in order to level off and which reduced the rate of descent to 1,500 fpm.

At 2,700 feet - 7.4nm from the runway threshold - the ILS LOC was captured with the aircraft still in clean configuration and at 250 knots. ‘Managed Speed’ was selected and the target speed then decreased to the “green dot” speed which resulted in engine thrust decreasing to 23% and the rate of descent increasing to 2,200 fpm. Both APs were then re-engaged and the speedbrakes were first retracted and then armed.

Passing 2,000 feet aal (2,287 feet altitude) with 6nm to go and the A/THR in speed mode, the aircraft became fully established on the ILS still in clean configuration at a recorded 253 knots and with a 1,500 fpm rate of descent.

Both AP were disengaged and a nose-up input was made on the Captain’s sidestick which resulted in the airspeed decreasing to 237 knots and the flight path deviating above the previously acquired glideslope. The landing gear was extended (point 6 in the illustration) and after a further half mile, flaps 1 was selected (point 7 in the illustration).

The PF, who reported then looking up and having the runway in sight, reacted by making a nose-down pitch input which increased the rate of descent to 2,750 fpm and led to the aircraft deviating almost full scale below the glideslope. At 1,000 feet aal with 3.7 nm to go, the indicated airspeed was 204 knots (VAPP +78 knots), the engine thrust was “close to idle” at 28% and the rate of descent was 1,328 fpm. The landing configuration was then changed from ‘flaps full’ to ‘flaps 3’ in the FMS (which increased the VAPP by 3 knots to 126 KIAS ) and at the same time, a Mode 5 EGPWS ‘Glideslope’ Alert was annunciated on the aircraft simultaneously with an MSAW Warning being activated in TWR. The controller immediately advised the crew of the MSAW Terrain alert and instructed the crew to immediately check their altitude (point 8 in the illustration) and received the response that they were maintaining altitude. The Captain then made a nose-up input on the sidestick which changed the pitch attitude changed from -2.7° to +7° which returned the aircraft to the glideslope.

At 940 feet aal with 3.2 nm to go, flaps 2 was being selected as the controller asked for confirmation that they were on the glideslope (point 9 in the illustration) and they were assured accordingly. Nine seconds later, at 900 feet aal (point 10 on the illustration), the newly designated landing, flaps 3, was selected with the speed 172 knots, still 46 knots above the VAPP. Passing 500 feet aal, the Air France VMC stabilisation altitude, the speed was 152 KIAS, 26 knots above VAPP (point 10 in the illustration) and the thrust set was “close to idle” at 27%. The indicated airspeed finally reached VAPP some 180 metres after crossing the runway threshold at a height of 10 feet agl. The thrust levers were placed in the idle detent at 6 feet agl and touchdown on the 3,380 metre-long runway occurred 380 metres past the threshold at 123 KIAS (point 11 in the illustration). The elapsed time between point 6 and point 11 on the illustration was exactly 2 minutes.

The approach was self evidently and intentionally conducted in gross non compliance with the applicable Air France OM Part ‘B’ procedures. This included but was by no means limited to explicit and significant breaches such as:

It was noted that the wholly unstabilised approach and its continuation to a landing was not only a procedural violation but put both pilots in a stressful situation in which they were both on the edge of coping with it. The consequence of the latter was that the Captain had failed to recognise that they had effectively, without being aware of it, removed any safety margin against something unexpected happening. One example of this would have been an unexpected need to initiate a go around for any reason with only flight idle thrust set below 500 feet. The Investigation noted the typical 4 to 5 fold increase in height loss and 3 fold increase in elapsed time before the transition to a climb occurs when initiating a go around in landing configuration with flight idle thrust (see the illustration below). 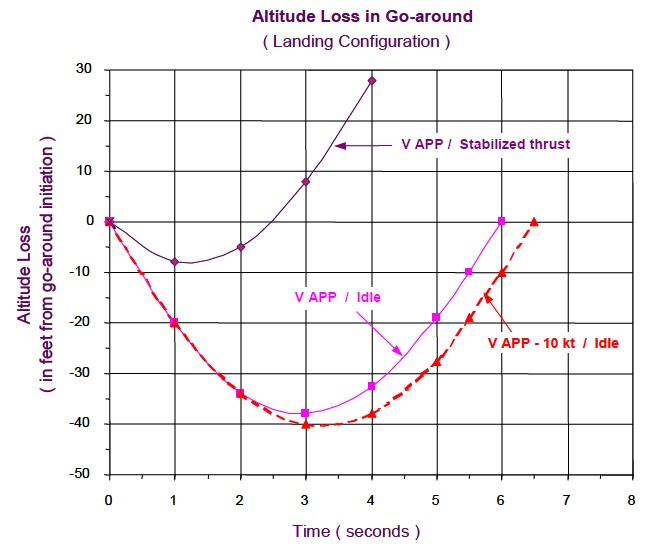 The effect of thrust on altitude loss during go-around. [Reproduced from the Official Report]. Editors Note: The illustration above was taken from a 2005 Airbus Flight Operations Briefing Note ‘Aircraft Energy Management During Approach’.

It was of concern that the Captain stated to the Investigation that he “could not remember the arrival briefing” or having any identified specific threats during it and indicated that his relatively infrequent flying during the Covid 19 health restrictions had prompted a desire “to get some training and stretch his limits a bit”. He further stated that he had considered that “at 1,000 feet there was no danger as there was still a margin and they had the runway in sight (and) at 500 feet, he was aware that the approach was not stabilised.....(but) did not doubt that the landing could be carried out safely”. He added that “he considered this flight as a non-event”.

Whilst there were generally adequate procedures for the conduct of an approach, the Investigation was concerned to discover that the operator’s OFDM programme at the date of the investigated event:

It was concluded that this failure to collect relevant data meant that the operator was not effectively tracking the operational risk which unstabilised approaches represented. This was considered to be of additional significance give that the operator had adopted the EBT approach to pilot training which is founded on there being adequate evidence from an operator’s own actual relative risk exposure.

Four potential Contributory Factors to the unstabilised approach were identified as follows:

A potential Contributory Factor to the approach being continued below 500 feet aal was also identified:

Two Safety Lessons were drawn from the findings of the Investigation which, in summary, were as follows:

Adherence to SOP on approach and the flight safety margin

During the approach phase, a crew’s workload increases as they manage aircraft energy to ensure stabilisation by and after the required height. The SOP profile provided gives a crew the ability to manage deceleration effectively and reach stabilisation by 1,000 feet. They then continue to have the ability to deal with any unexpected events which may occur at any time up to touchdown. In addition, an unstable approach, whether the decision at the stabilisation height is to go-around or to land, significantly increases risk.

Moreover, in a period of low activity, the crew’s ease and dexterity may be diminished. The procedural compliance always necessary to guarantee essential safety margins is even more important for crews who, as in the investigated case, are flying much less frequently than usual.

One of the aims of OFDM is to enable an operator to establish whether its crews are complying with the procedures in its OM. The detection of unstabilised approaches is important but just as important is being able to see how such a situation was allowed to develop and what was then done about it. The current Air France OFDM programme does neither of these. In addition, Air France persists with a stabilisation height which differs according to whether IMC (1000 feet) or VMC (500 feet) which is neither known nor, arguably, relevant. These deficiencies in the OFDM programme also compromise the effectiveness of the EBT approach to pilot training which Air France has embraced.

The Final Report was initially published in the definitive French language on 17 December 2021 and this was followed on 24 March 2022 by an English Language translation. No Safety Recommendations were made.