On 20 December 2019, an Airbus A318 making a tailwind ILS approach to Toulon-Hyères with the autopilot engaged and expecting to intercept the glideslope from above had not done so when reaching the pre-selected altitude and after levelling off, it then rapidly entered a steep climb as it captured the glideslope false upper lobe and the automated stall protection system was activated. Not fully following  the recovery procedure caused a second stall protection activation before a sustained recovery was achieved. The Investigation noted Captain's  relative inexperience in that rank and a First Officer's inexperience on type.

On 20 December 2019, an Airbus A318 (F-GUGD) being operated by Air France on a scheduled domestic passenger flight from Paris Orly to Toulon-Hyères as AF7512 in day IMC was seriously mismanaged during an autopilot-controlled ILS glideslope capture from above and two successive alpha floor protections were triggered before a sustained recovery was achieved and the aircraft positioned for a second successful approach.

An Investigation was carried out by the French Civil Aviation Accident Investigation Agency, the BEA using relevant FDR and recorded ATC data.

With the First Officer as PF, the flight was working Toulon APP and approaching from the northwest. It was number 1 inbound and had been cleared for continuous descent to 1,900 feet QNH. The crew were informed that the surface wind was 150°/12-19 knots with runway 23 in use but given the presence of BKN (broken) cloud at 1,700 feet aal, the controller suggested that the circling approach necessary for that runway might be “a bit tight”.

The crew asked if they could make an ILS approach to runway 05 which was approved and the left turn towards final approach was commenced. The speedbrakes were extended and the AP and A/THR were engaged in OP DES/NAV and THR IDLE modes respectively. The aircraft was about 16 nm away from destination and passing 6,500 feet QNH at 250 KIAS with a 2000 fpm rate of descent. Once on long final, a significant tailwind component was registered by the onboard sensors and this remained above 40 knots down to about 3000 feet QNH.

Around one minute later, the aircraft passed the initial approach fix (IAF) which was located 12 nm from the runway threshold. It was descending through 5,170 feet QNH which was approximately 1,350 ft above the procedure 3° glide slope. Observing this, the controller asked the crew if they wanted to continue a direct approach or enter the holding pattern in order to descend which they declined and were therefore cleared for a direct ILS approach to runway 05 and the APPR mode was engaged (Point 3 on the illustration). The ground speed was 307 knots and the airspeed 237 knots but decreasing. A few seconds later, the airspeed was down to 220 knots and the landing gear was extended and the ILS LOC captured and the slats/flaps were then set to CONF 1.

Thirty seconds later, at 6.4 nm from the runway threshold, the AP mode changed to ALT* mode as the still-selected altitude of 1,900 feet was neared but this was not noticed by either pilot and the aircraft almost immediately passed the final approach fix (FAF) situated at 5.3 nm from the runway threshold. At this point, the altitude was 2,200 ft and decreasing more slowly as the selected altitude (200 feet higher than the FAF). The crew engaged the managed speed mode with the PFD now showing the ILS GS as almost at full scale fly down. 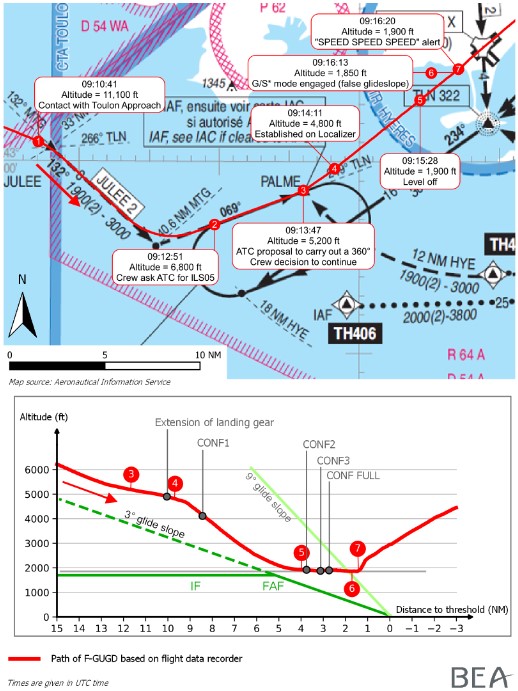 On reaching 1,900 feet QNH, the AP mode changed to ALT mode and level flight began, taking the aircraft even further from the nominal 3° glide slope (point 5 on the illustration). The crew “did not realise that the aircraft was in level flight” and the aircraft was still in cloud. They set the slats/flaps to ‘CONF2’, then to ‘CONF3’ and then to ‘FULL’ given the relatively limiting 1904 metre LDA of the intended landing runway. According to the crew, the landing checklist was carried out immediately afterwards. At this point, the ground speed was 175 knots and continuing to decrease.

The aircraft then reached the 9° slope of the ILS GS false upper lobe and as a result the AP G/S* mode engaged (point 6 on the illustration). The aircraft continued through the 9° ‘slope’ in level flight but since this false lobe has the effect of reversing the guidance signal, the AP then initiated a nose-up pitch attitude and over the next 20 seconds or so, it increased to approximately 30°. The crew indicated in their statements that the increase in pitch, although rather quick, had to them been “barely perceptible”.

As this was happening, ATC instructed the crew to fly a missed approach but received no response. The increased pitch attitude resulted in a significant increase in the AoA and a concurrent significant decrease in airspeed. The A/THR then started to increase thrust and when the AoA reached the trigger threshold, a low energy alert was activated and the aural alert “SPEED SPEED SPEED” was activated (point 7 in the illustration). Two seconds later, ALPHA PROT stall protection phase was activated and the PF First Officer moved the thrust levers in the TOGA detent but did not call out his actions. Immediately after this, the crew disconnected both APs and the ALPHA FLOOR stall protection phase was activated. The First Officer reported seeing the TOGA LK message appear on the Flight Mode Annunciator (FMA) and briefly moved the thrust levers from TOGA to IDLE in order to disconnect the A/THR and then cancelled the TOGA LK and returned the levers to the TOGA position.

As the pitch attitude reached 30°, the AoA reached 16°, exceeding the 15° Alpha for one second before decreasing in response to the combined effect of the ALPHA PROT activation and nose down inputs made by the PF. The indicated airspeed also decreased, reaching a minimum of 96 knots (20 knots below the lowest speed the A/THR can set (VLS)) and 2 knots above the stalling speed at 1g (VS1G).

The PF then commenced a climb on the runway centreline at a rate of approximately 1,000 fpm holding a pitch attitude of 15° consistent with the PFD command bars in Speed Reference System (SRS) mode which is applicable in the case of a go around. As a result of this action, the AoA remained close to 12°, the threshold of the ALPHA PROT protection (which was triggered again for ten seconds), and the indicated airspeed was being held below the VLS. When the flap/slat setting was changed from ‘FULL’ to ‘CONF3’, the airspeed increased above the VLS again having been below it for a recorded 46 seconds.

On reaching 4,000 ft, the crew retracted the flaps/slats to CONF2 and engaged AP2 and the A/THR and after radar vectors onto to a second runway 05 ILS, it was continued to a landing without further event.

It was noted that the Airbus A320 FCOM included a procedure to intercept an ILS GS from above once established on the LOC with the AP engaged which consists of  arming the APPR mode, setting a selected altitude which is above the actual altitude and engaging V/S mode, initially at -1500 fpm.

Recovery action from the upset according to Air France documentation (which defined an upset as a pitch attitude exceeding 25°) should have involved disconnecting the AP and the A/THR and flying manually wings level and making a nose down pitch input “of sufficient amplitude to enter a nose down attitude” whilst adjusting thrust and returning to level flight with sufficient speed. It was observed that whilst the First Officer’s initial actions were in line with the first items of the published recovery technique, his subsequent holding of pitch to around 15° “corresponded more to the FD commands being followed than carrying out the recovery technique”. It was concluded that the consequence of this was to prolong the time below VLS and that “fully following the upset recovery procedure linked to an excessive nose-up pitch might have contributed to the crew getting out of the low energy situation more quickly”.

It was noted that in the event that a false upper (9°) ILS lobe is encountered with the autopilot engaged, the adoption of an excessive pitch attitude is already automatically avoided by protection which is provided as part of the standard avionics fit for the A320neo, the A350 and the A380 and is also available for some A330/A340 dependent on the version of their onboard computers at build. The same “anti pitch-up excursion protection” is also intended to become progressively available on all other A320 family aircraft, including the A320ceo, from 2023.

Similar Events: the Investigation noted two similar events which had been subject to independent investigation as one involving an Air France Airbus A340-300 at Paris CDG in 2012 and one involving a Ryanair Boeing 737-800 at Eindhoven in 2013.

Five potential Contributory Factors to the event were identified as follows:

Safety Action taken by Air France was noted as the publication in July 2020 of an information document on intercepting a glide slope from above to be used in support of ground training sessions which included the following reminders:

The Final Report was initially published in the definitive French language on 9 September 2021 and this was followed on 15 October 2021 by an English Language translation. No Safety Recommendations were made.