On 6 December 2007 an Airbus A318 being operated by Air France on a scheduled passenger flight from Lyon to Amsterdam carried out missed approach from runway 18C at destination and lost separation in night VMC against a Boeing 737-900 being operated by KLM on a scheduled passenger flight from Amsterdam to London Heathrow which had just departed from runway 24. The conflict was resolved by correct responses to the respective coordinated TCAS RAs after which the A318 passed close behind the 737. There were no abrupt manoeuvres and none of the 104 and 195 occupants respectively on board were injured.

On 6 December 2007 an Airbus A318 being operated by Air France on a scheduled passenger flight from Lyon to Amsterdam carried out missed approach from runway 18C at destination and lost separation in night Visual Meteorological Conditions (VMC) against a Boeing 737-900 being operated by KLM on a scheduled passenger flight from Amsterdam to London Heathrow which had just departed from runway 24. The conflict was resolved by correct responses to the respective coordinated Airborne Collision Avoidance System (ACAS) RAs after which the A318 passed close behind the 737. There were no abrupt manoeuvres and none of the 104 and 195 occupants respectively on board were injured.

An Investigation was carried out by the Dutch Safety Board. It was noted that two runways (27 and 18C) were in use for landing traffic and one (24) for departing traffic and that there had been quite a strong westerly wind at low levels with associated mechanical turbulence prevailing.

It was established that the go around carried out by the A318 had only commenced just before touch down with minimum height being approximately 15 feet over the runway and had been made because it was judged that the aircraft was to the right of the runway 18C centreline to such an extent that the aircraft was not in a safe position to complete the landing. As the A318 approached the designated missed approach stop altitude of 1500 feet, a TCAS TA generated by the nearby B737 was followed almost immediately by a TCAS RA to descend at 1000 fpm or more. This was actioned promptly and resulted in a descent to 1300 feet before clear of conflict was received after 24 seconds of warning. During this time, the conflicting aircraft was visually acquired ahead. In the 36 seconds which elapsed between the initiation of a go around and the RA, it had not been possible for the A318 crew to advise ATC of their go around because of other priorities in a high workload and so it was notified concurrently with advice of the TCAS RA.

The 737 was cleared to take off from runway 24 and climb to FL060. As it passed 1107 feet tracking towards a position just ahead of the A318, a coordinated TCAS RA requiring a climb of at least 1500 fpm occurred but this required no crew intervention as the rate of climb was already in excess of that figure. During the RA, the A318 was acquired visually. It was established that although the aircraft TCAS had not activated until about 11 seconds before the closest proximity occurred, both systems had functioned correctly.

Radar recordings showed that after the TCAS RA responses, the 737 crossed in front of the A318 at an altitude of 1248 feet. Six seconds later, the A318 passed the same point at an altitude of 1300 feet. It was noted that “the fact that a collision did not occur was due to the lateral separation of both aircraft at the moment KLM1027 crossed in front of AF3484 at the same altitude”. At that moment the estimated distance between the two aircraft based on radar, FDR and TCAS data was 460 metres +/- 25 metres. 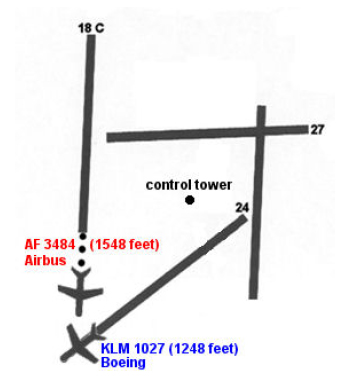 Schematic of B739 (KLM) crossing in front of A318 (Air France). Reproduced from the Official Report

It was found that the take off clearance for the 737 had been given contrary to the ATC procedures governing simultaneous use of runways 24 and 18C when the A318 was still on short final at approximately 200 feet with 0.7nm to go and 26 seconds prior to the initiation of the go around. The relevant ANSP documented requirement was found to state that:

“commencement of a takeoff roll on 24 is not allowed once a landing aircraft’s position is within 3NM distance of Runway 18C and until the landing has been completed.”

It was also found that neither runway controller had noticed the go around and thus neither had identified the potential conflict which it had created because of the premature take off clearance given to the 737. It was also noted as a matter of considerable concern, that “the course of action of the controllers involved was not unusual” and that the internal investigation by the ANSP had concluded that “for capacity reasons, deviations from prescribed operational procedures occur on a regular basis”.

It was also noted that, whilst the acceptance by the runway 24 controller of a request from another inbound aircraft to switch from runway 27 to runway 24 for landing after the departure of the next aircraft to take off from 24 after the incident 737 did not appear to have had a direct bearing on the investigated event, there was no ATS procedure to include such an additional complication to the permitted simultaneous use of runways 18C, 24 and 27 nor had there been any or corresponding risk assessment.

The Investigation was unhappy with the response actions of both the ANSP and their regulatory oversight agency and found both to be deficient in failing to properly identify the cause of the event and establish an appropriate response. A number of concerns which are discussed in detail in the Investigation Report included:

The overall Conclusion of the Investigation was that:

“the incident would not have occurred if the (appropriate ATS) procedure …..had been complied with” and that “an occurrence became unavoidable from the moment (the A318) initiated a go around.”

It was also considered that “in view of the existing gusty crosswind, the altitude at which the (A318) go-around had to be initiated, the actions to be taken to direct the aircraft into a stabilised climb and the subsequent TCAS warning, the timing of the missed approach call to Air Traffic Control is considered appropriate”.

In respect of the ANSP (LVNL) the Investigation noted that “maintaining adequate separation is the duty of Air Traffic Control” and concluded that “the rules and instructions for air traffic services are lacking a clear distinction between strict regulations and general guidelines; for that reason they are ambiguous” and that “the stated internal remedial measures, such as emphasising to Air Traffic Controllers that compliance with established procedures during converging runway operation is essential, have not been accomplished systematically”.

In respect of the ATS regulatory function of the ‘Inspection Transport and Public Works’ (IVW), the Investigation determined that “on this occasion the IVW did not completely fulfil its task as the supervisory agency”