On 5 July 2012, an Airbus A319 entered its departure runway at Naha without clearance ahead of an A320 already cleared to land on the same runway. The A320 was sent around. The Investigation concluded that the A319 crew - three pilots including one with sole responsibility for radio communications and a commander supervising a trainee Captain occupying the left seat - had misunderstood their clearance and their incorrect readback had not been detected by the TWR controller. It was concluded that the controller's non-use of a headset had contributed to failure to detect the incorrect readback.

On 5 July 2012, an Airbus A319 (B2332) being operated by China Eastern Airlines a scheduled international passenger flight from Naha to Shanghai (as CES2046) taxied onto runway 18 for departure in day VMC contrary to its ATC clearance when an Airbus A320 being operated by Air Asia Japan (as JA01AJ) on a test flight from Tokyo Narita to Naha was on final approach to the same runway and had been cleared to land on it. ATC observed the incursion and instructed the A320 to go around, which it did.

An Investigation was carried out by the Japan Transport Safety Board (JTSB). The DFDR data from both aircraft and ATC recordings of radar and radio communications were used to help establish the factual basis for the Investigation. It was found that relevant data from the 2 hour CVRs from both aircraft had been overwritten. The data from an MLAT system which had been under "operational evaluation" at the time of the incursion was also available.

It was noted that the TWR controller's position was located approximately 1,680 metres from the runway access where the incursion occurred (see below) and that visibility was good. The A320 flight was being observed by a Company Check Pilot and an Operations Inspector from the Japan CAB travelling in the flight deck.

It was established that GND had cleared the A319 to taxi to the runway 18 holding point and then, as it approached the limit of its clearance, had transferred it to TWR. By this time, TWR had already cleared the A320 to land on runway 18 and received the corresponding readback. The A319 checked in with TWR as it entered the assigned runway access taxiway E0 (see the diagram) and was instructed to "hold short of runway 18, report ready". The readback from the aircraft which followed was “(unintelligible sound) runway 18, report ready.” At this point, the A320 was on final approach at about 3.5 nm out at an altitude of 1,000 feet. The A319 braked slightly which reduced its groundspeed to less than 10 knots (the First Officer subsequently stated that this had been so as to complete the 'Before Take Off Checks' prior to entering the runway) but it continued moving forward and eventually crossed the runway holding point. As it did so, the A320 was about 2.7 nm out and passing about 920 feet agl with its landing lights on. The A319 continued onto the runway where it began to turn left to line up on the runway centreline and reported that it was ready for departure. Having recognised what had happened, TWR told the A319 to hold position and instructed the A320 to go around. The climb in response was commenced from about 770 feet agl when about 2.1 nm out. The A320 PF reported having had the runway in sight from about 8nm out but had been unable to distinguish detail such as buildings and had not seen the other aircraft on the runway and only learned of it from the First Officer after the go around.

The Naha TWR position relative to the runway annotated with the distance between the TWR and where the incursion occurred. [Reproduced from the Official Report]

Statements from the A319 flight crew indicated that the supernumerary pilot responsible for communications had received from TWR "Line up and wait, report when ready" and had passed this to the two operating pilots as "line up and wait". The Captain of the A319 stated that he had looked up the approach as the aircraft had entered the runway but had not seen any aircraft on final. He subsequently heard a 'go around' instruction issued followed by sight of an aircraft flying overhead and into a right hand circuit. He did not recollect hearing any further information from ATC prior to take-off clearance and had "believed that it was a normal departure" until advised to the contrary after the flight. The pilot responsible for communications advised that it had been his first visit to Naha.

It was stated that China Eastern policy in respect of radio communications when there are three pilots in the flight deck is that although all three pilots are expected to monitor ATC radio communications, the aircraft commander "decides which of the PM or the pilot seated in the observer seat will be responsible for the radio communication [and] if the pilot in the observer seat is responsible [...] that pilot will read back the communication as he understands it, and then if there are no corrections from ATC, he will verbally convey those instructions or clearances once again to the pilots in the front seats". If either of the pilots in the front seats believes that the readback has been incorrect despite the absence of any controller awareness of this, "that pilot will immediately notify the pilot in the rear seat".

The TWR controller stated that she had been "concerned about the headset cord interfering with her ability to move and look behind her (and) therefore, she was not wearing the headset over her ear and was instead carrying out communications while holding it in her hand […] making transmissions with the tip of the headset voice tube pointed toward her mouth". It was noted that the headsets used at Naha were of the ear-hook type (see the illustration below) and also that the loudspeakers for both the GND and TWR frequencies were routinely on all the time in the control room. 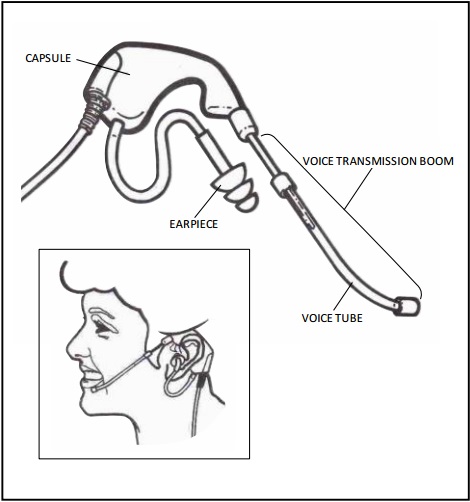 The ear-hook type of headset. [Reproduced from the Official Report]

The recording which included the transmissions made by the TWR controller involved was found to include "pop noise (noise occurring when sound is cracked by excessive strength of the voice or by blowing into a microphone)" which primarily occurred in the case of consonant sounds and had been "particularly prominent" in the case of the 'hold short' portion of the misunderstood transmission in which the A319 had been instructed to hold short of the runway. The recording of the beginning of the readback was "very difficult to read". In addition, it was found that immediately after the hold instruction from TWR to the A319 had been completed, another aircraft which had been instructed on the GND frequency to taxi to the runway, began to read back its instruction and with the control room loud speakers on, the beginning of the readback from the A319 overlapped with the end of the this GND frequency readback "for about 1.2 seconds". It was concluded that "pop noise" was likely to have "been involved in the mishearing" of the TWR controller's 'hold short' instruction.

It was noted that "the recorded sound of the Controller’s voice was derived from the signal at the stage where it was output from a control console to a transmitter and was not from the signal which had been transmitted and then received" so it was not necessarily of the same quality as the sound heard in the aircraft.

The failure of the TWR controller to wear her headset as intended by its manufacturer was considered to be the primary reason for both the lack of clarity in her 'hold short' transmission to the A319 and (because of the short overlap of the GND and TWR aircraft readbacks) of her failure to recognise the unclear readback of that clearance. It was concluded that effective communications required that controllers wear their headsets at all times when in position. A slight delay in the TWR controller seeing that a runway incursion had occurred was attributed to her line of sight being briefly obscured by a taxiing Boeing 777.

The Probable Cause of the Serious Incident was determined as "the departing [A319] aircraft made an incursion onto the runway despite being instructed to hold short of the runway, causing the arriving [A320] aircraft, which had already been cleared to land, to attempt to land on the same runway" and that "the departing aircraft entered the runway because its flight crew misheard and misunderstood the instruction to hold short of the runway as an instruction to hold on the runway and did not notice the aircraft on approach and also because the Tower Controller did not recognise that the readback from the departing aircraft was incorrect and consequently did not confirm or correct it".

It was also found that the following Contributory Factors were "somewhat likely":

In terms of the ICAO system for classifying the actual severity of runway incursions, the investigated occurrence was considered to correspond to a 'C' classification.

The Final Report was adopted by the JTSB on 24 April 2015 and published on 28 May 2015. No Safety Recommendations were made.