On 7 September 2012, the crew of an Air France Airbus A319 failed to follow their arrival clearance at destination and turned directly towards the ILS FAF and thereby into conflict with a Boeing 737-500 on an ILS approach. When instructed to turn left (and clear of the ILS) by the controller, the crew replied that they were following standard arrival which was not the case. As the separation between the two aircraft reduced, the controller repeated the instruction to the A319 to turn left and this was acknowledged. Minimum lateral separation was 1.7nm, sufficient to activate STCA.

On 7 September 2012, an Airbus A319 being operated by Air France as AFR 1482 and a Boeing 737-500 being operated by Czech Airlines as CSA77E lost separation in the vicinity of the runway 24 Instrument Landing System (ILS) at Prague in day Visual Meteorological Conditions (VMC) when the A319 did not follow its clearance. Controller action prior to Short Term Conflict Alert (STCA) activation was able to resolve the situation and the 737 continued its ILS approach without interruption.

It was established that both aircraft involved in the conflict were inbound to Prague. The Czech Airlines Boeing 737 was about to become established on the ILS for runway 24 and the Air France A319 was flying a LOMKI 4S STAR and approaching the IAF at waypoint ERASU. The charted STAR instructions were that "unless otherwise instructed, after ERASU continue on heading 062°, radar vectoring will be provided". It was noted that after checking in with APP, the A319 crew asked whether APP wanted to shorten the aircraft track but the response (which was acknowledged) was "expect normal vectoring from 4000".

However, after passing ERASU, the A319 turned right on a base leg for the 24 ILS contrary to clearance whilst continuing descent to 4000 feet as cleared. At that, time, the 737 was establishing on the ILS LOC at 4000 feet. ATC observed the A319 turn and to prevent loss of separation (at that time the two aircraft were 4.1 nm apart) ATC instructed the A319 to turn left. Although acknowledged, this action was not immediately commenced and the crew responded "we are following standard arrival". Given the slow response to the "turn left" instruction, ATC repeated it (the separation was now 3nm). This was again acknowledged and the instruction to climb to FL060 was also given and also acknowledged. The tracks of the two aircraft up to the point where conflict resolution began to take effect are shown on the radar recording reproduced below. 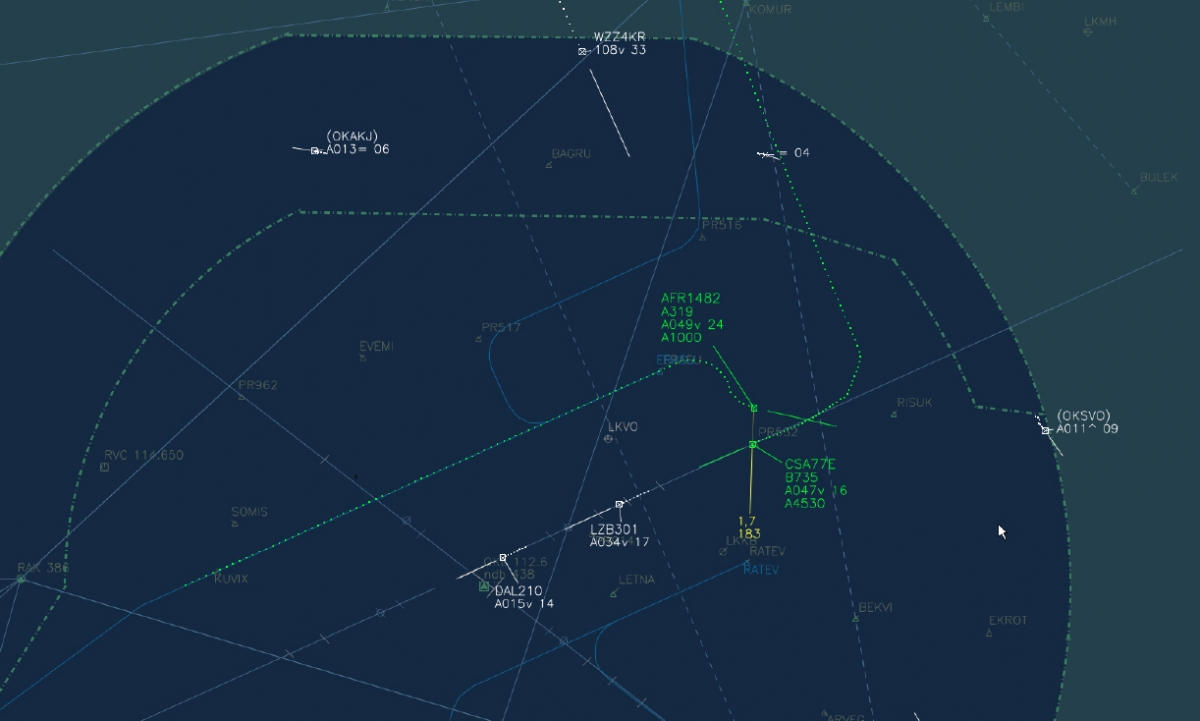 The minimum lateral separation from the 737, which continued on the ILS, was 1.7nm. The STCA activated as configured at a 2nm separation

A statement to the Investigation from the A319 Captain indicated that the aircraft Flight Management System appeared to have been mis-programmed so that after ERASU, it turned towards waypoints PR531 and PR532 which are published on the ILS procedure chart but not on the LOMKI 4S STAR chart which includes only waypoints PR511 and PR512. It was also noted that the A319 First Officer had suggested to the Captain that the clearance after ERASU should be clarified with ATC but that thus suggestion had not been accepted.

The formally-stated Conclusions of the Investigation included that "the A319 crew could have prevented the incident occurrence by enquiry at APP for clarification of the flight procedure after passing ERASU point".

The Final Report was completed in September 2013. No Safety Recommendations were issued.