On 26 May 2013, an A319 in Swiss Class 'C' airspace received a TCAS 'Level Off' RA against a 737 above after being inadvertently given an incorrect climb clearance by ATC. The opposing higher-altitude 737 began a coordinated RA climb from level flight and this triggered a second conflict with another 737 also in the cruise 1000 feet above which resulted in coordinated TCAS RAs for both these aircraft. Correct response to all RAs resulted in resolution of both conflicts after prescribed minimum separations had been breached to as low as 1.5nm when 675 feet apart vertically.

On 26 May 2013, an Airbus A319 (G-EZAU) being operated by EasyJet on a scheduled passenger flight from Milan Malpensa to London Luton as EZY 899B received a TCAS RA against conflicting traffic whilst climbing to FL 380 in accordance with its ATC clearance in Swiss Class 'C' airspace. The aircraft above, a Boeing 737-800 (D-ABKB) being operated by Air Berlin on a scheduled flight from Nuremberg to Palma de Majorca as BER17Z and level at FL370 received a coordinated TCAS RA to climb which, when actioned, resulted in a further TCAS RA due to conflicting traffic above level at FL 380. This traffic was a Boeing 737-800 (G-TAWF) being operated by Thomson Airways on a scheduled passenger flight from Hurghada to East Midlands UK as TOM 857. Loss of prescribed separation occurred between the Air Berlin aircraft and both the others involved. This occurred in day VMC.

An Investigation was commenced by the Swiss Accident Investigation Board (SAIB). Recorded ATC data in the form of R/T and radar recordings and Mode S downlinked data was of critical importance to the investigation. The EasyJet A319 was fitted with TCAS ll v7.1 and the Air Berlin 737-800 was fitted with TCAS ll v7.0. The Thomson 737-800 TCAS ll version was not communicated but since v 7.0 had been mandatory since 2005, it was assumed that at least this version would have been fitted. CVR data from all three aircraft was overwritten and given the availability of Mode S downlink data, it was not necessary to seek access to aircraft FDR data.

It was noted that the two conflicts occurred between FL360 and FL380 in Class 'C' airspace. The prevailing weather conditions were excellent, with in-flight visibility of greater than 70 km, and no cloud above 12,600 feet. The airspace involved was that controlled by Geneva ACC Sectors L5 (FL355-FL374) and L6 (FL375 and above) which had been combined until split approximately 20 minutes prior to the occurrence of the investigated event. 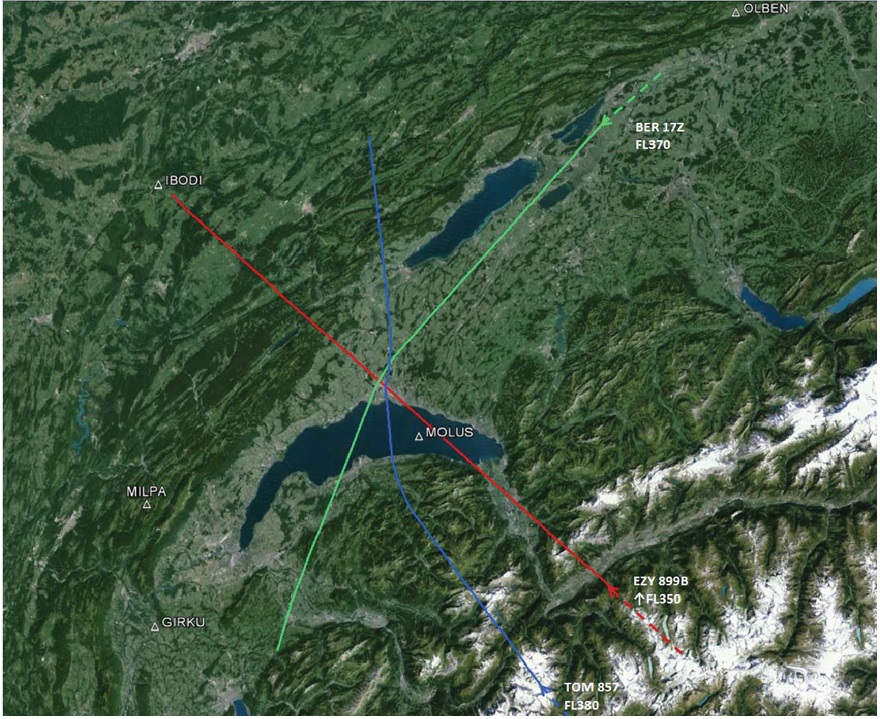 Approximately one minute after the clearance to FL380 had been given, with the climbing A319 approaching the 737-800 at FL370 a STCA was triggered in Sector L5 and the controller responded by instructing the A319 to maintain FL 360. Three seconds later, a TCAS 'LEVEL OFF' RA was annunciated on the A319 (VSI green arc between 0 and 300fpm down) as it was about to pass FL360 with a 2,200 fpm rate of climb. The flight crew reacted promptly to RA and advised ATC of its occurrence. Having exceeded FL360 by only 150 feet, the aircraft returned to it within approximately thirty seconds with an RA 'Clear of Conflict' annunciation occurring just prior to reaching it.

Four seconds after the A319 'LEVEL OFF' RA, a coordinated TCAS 'CLIMB' RA was annunciated on the Air Berlin 737-800 level at FL370 (VSI green arc 1,500-2,000 fpm). The crew responded accordingly but after 10 seconds, having begun to close on the other 737-800 at FL380 working Sector L6, the RA changed to 'ADJUST VERTICAL SPEED' (VSI green arc between 0 and 300fpm down). This RA lasted 28 seconds and resulted in the initial climb being stopped a little below FL373. Five seconds before it ceased and 'Clear of Conflict' was annunciated, the Thompson 737-800 at FL380 received a preventive TCAS RA 'MONITOR VERTICAL SPEED' (indicating do not descend). This was followed one second later by a 'CLIMB' RA lasting 4 seconds after which both 737-800s received 'Clear of Conflict' annunciations. The Thompson 737-800 reached FL381 before adjusting back to FL 380.

The 'secondary' conflict between the two 737-800s led to an STCA activation in both the L5 and L6 sectors when the two aircraft were 5.1nm apart laterally and 825 feet apart vertically - 3 seconds after the Air Berlin 737-800 had received its 'ADJUST VERTICAL SPEED' RA. This led to the Thompson 737-800 being instructed to "turn immediately onto heading 040°" which was then changed immediately to 030°. This was initiated promptly and a further 10 seconds elapsed before the 5 second TCAS RA sequence occurred.

The Investigation found that the L5 Executive Controller who had cleared the EasyJet A319 to climb to FL380 when intending to repeat his original clearance to FL360 had thereby initiated the subsequent losses of separation stated that "during and after the conflict, he did not doubt at any time that he had assigned flight level FL 360 at the time of the second clearance" and that only when he later listened to the R/T recording of his clearances did he realise his error. The L6 Sector controllers had only seen the conflict involving the two 737-800s - the involvement of a third aircraft, the A319, was unknown to them as this flight was not visible on their radar displays.

The correct functioning of and response to the two Safety Nets - TCAS ll and STCA - was noted as having resolved the collision risk created by the L5 Executive Controller's inadvertent issue of an incorrect climb clearance and his failure to recognise it prior to the STCA activation.

The Investigation formally determined that the Cause of the Serious Incident was:

The Final Report was completed on 27 April 2016, approved by the Swiss Transportation Safety Investigation Board (STSB), which had succeeded the SAIB during the Investigation, on 12 May 2016 and was subsequently published by them. ICAO AIRPROX Category 'B' was assigned based on the risk of collision (this is assessed after taking account of avoiding action(s) which have been taken). No Safety Recommendations were made.