On 10 January 2008, an Air Canada Airbus A319 en route over the north western USA encountered unexpected sudden wake vortex turbulence from an in trail Boeing 747-400 nearly 11nm ahead to which the pilots who then responded with potentially hazardous flight control inputs which led to reversion to Alternate Control Law and aggravated the external /disturbance to the aircraft trajectory with roll up to 55° and an unintended descent of 1400 feet which with cabin service in progress and sea belt signs off led to cabin service carts hitting the cabin ceiling and several passenger injuries, some serious.

On 10 January 2008, an Airbus A319-100 being operated by Air Canada on a scheduled passenger flight from Victoria BC to Toronto in night Visual Meteorological Conditions (VMC) was west of Oroville Washington USA when it was subjected to sudden jolts and then a series of rolls which resulted in an unintended descent of 1400 feet before straight and level flight was regained. During the episode, cabin service was in progress and seat belt signs were off. Cabin service carts were lifted off the floor and struck the ceiling above occupied passenger seats before coming back to rest in the aisle. The flight crew, suspecting a flight control abnormality, declared an emergency and diverted uneventfully, and without further use of the autopilot, to Calgary. Three of the 88 occupants sustained serious injuries and eight sustained minor injuries as a result of falls and collisions with aircraft furnishings.

An Investigation was carried out by the Canadian TSB. It was established that the aircraft had been climbing in accordance with its ATC clearance from FL350 to cruise altitude FL370 behind a United Airlines operated Boeing 747-400 en route from Hong Kong to Chicago and level at FL 370 and that the incident had occurred as the A319 had passed FL366 at a distance of 10.7 nm in trail behind the Boeing. The relative tracks are shown on the diagram below taken from the Official Report.

Following comparison of aircraft trials data with Incident FDR data, it was established that an initial disturbance had been due to wake vortices from the aircraft ahead. With a wind no more than 12º off the tail of both aircraft, the track of the A319 was aligned with the descending vortices. Air stability, with little mechanical turbulence, promoted longevity of the rotational energy contained in the vortices. This energy was sufficient to initiate significant pitch attitude change which "resulted in negative g forces and displacement of persons and objects in the cabin.”

However, with the aircraft commander as PF, before the autopilot had countered the initial un-commanded roll perturbation, the PF disconnected the autopilot and autothrottles and attempted manual correction. Four further rolls of up to 55° wing down then followed with the whole disturbance lasting 18 seconds and involving multiple side stick and rudder pedal inputs, some of which “exacerbated the situation”. It was noted that the event was the aircraft commander’s first experience of significant wake turbulence upset of this degree and he had “believed that there was a serious aircraft-induced flight control problem”.

It was considered that both the encountered wake turbulence and the subsequent pilot-induced control inputs had contributed to the displacement of unrestrained passengers and objects in the cabin. It was also found that the lateral accelerations had imposed air loads on the vertical stabiliser structure following pilot inputs had exceeded its certified limits and that “some pilot actions intended to rectify the upset (to the A319) were similar to those that contributed to damage to the vertical stabilizer attachment fittings (in the fatal accident to the American Airlines A300) in 2001.” See A306, vicinity JFK New York USA, 2001

It was considered by the Investigation that since “the low expectancy of experiencing such an upset event in cruise flight combined with little or no warning of entering wake vortices likely startled the pilots, who then responded with potentially hazardous flight control inputs. Advance warning of possible wake turbulence could sensitize pilots and prepare them for such an encounter.”

It was additionally noted that, during the incident, “the automatic reversion to alternate (flight control) law due to differences in computed angle of attack values was also a product of pilot control inputs.” 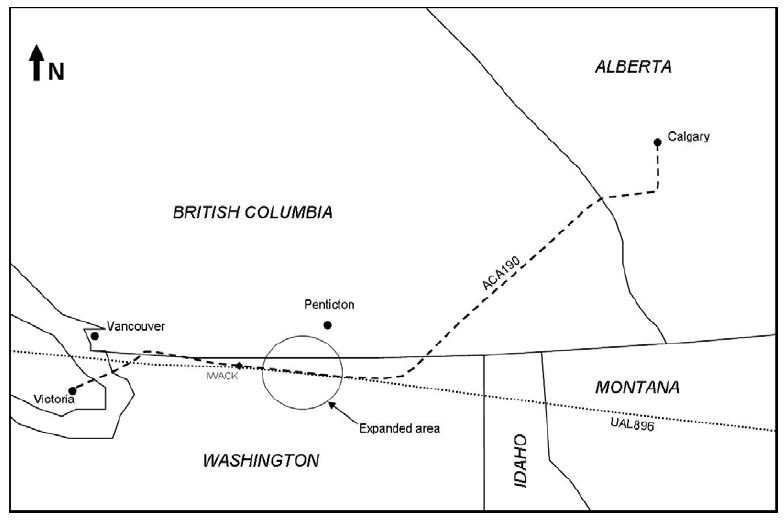 Findings of the Investigation

The following are the full statement of the Findings of the Investigation taken verbatim from the Final Report:

Findings as to Causes and Contributing Factors

Findings as to Risk

The Final Report of the Investigation was released 8 April 2010 and may be seen in full at SKYbrary bookshelf: TSB Canada Aviation Investigation Report A08W0007