On 8 August 2011 an Air France Airbus A319 crew failed to correctly identify the runway on which they were cleared to land off a visual approach at Casablanca and instead landed on the parallel runway. ATC, who had already cleared another aircraft to cross the same runway, did not notice until this other aircraft crew, who had noticed the apparently abnormal position of the approaching aircraft and remained clear of the runway as a precaution, advised what had happened. Investigation was hindered by the stated perception of the Air France PIC that the occurrence was not a Serious Incident.

On 8 August 2011, the crew of an Airbus A319 (F-GRXC) being operated by Air France on a scheduled passenger flight from Paris CDG to Casablanca as AF 1896 carried out an approach to and landed on the wrong runway at destination in day Visual Meteorological Conditions (VMC). The error was reported to ATC by the crew of an aircraft which had been cleared to cross the runway on which the Air France aircraft landed but had noticed the apparently abnormal position of the Air France aircraft in relation to the clearance it had received and decided not to do so.

An Investigation was carried out by the Moroccan DGCA BEA. It was hindered by the failure of the Air France crew to follow prescribed reporting and other procedures after such a Serious Incident. The aircraft commander involved stated that as far as he was concerned “this incident was by no means serious, since it had not compromised safety, and that it did not justify the triggering of a serious incident procedure”. The relevant DFDR data was successfully recovered but the crew had continued as scheduled after the event and so the Cockpit Voice Recorder (CVR) was overwritten. No ASR was filed following the event and by the time the Investigation was able to interview the crew, they had stated that “given the date of the incident, they could not remember the precise details referred to in the interview” and “they agreed to review certain statements made….after consulting the transcripts of the radio communications”.

It was noted that Casablanca APP had initially cleared the inbound flight to descend to FL050 and anticipate guidance to runway 35L. With the First Officer designated as PF, the approach briefing had been conducted accordingly and was not subsequently revised. A few minutes later, the A319 crew reported ‘field in sight’ and, in answer to a request made by the aircraft commander, were re-cleared to position visually to runway 35L. This was repeated when transferring the flight to TWR a minute later and when landing clearance was subsequently given by TWR for 35L, it was correctly read back. It was concluded that both pilots had been “well rested” and had “showed no sign of fatigue”.

It was established that the prevailing weather conditions had been compatible with a visual approach and a request for one by the flight crew had been approved by ATC. It was considered that “the crew complied with the minimum (VMC) stabilisation height defined by Air France, which on the date of the incident was 500 feet”. However, it was noted that the localiser of the runway 35L Instrument Landing System (ILS) which should have been displayed would have been at Full Scale Deflection at the ‘fly left’ position throughout the approach and also that approach stabilisation criteria at the time included that “the aircraft is on the published flight path (horizontal flight and glide slope)”.

The testimony of the flight crew included their opinion that “as regards cockpit resource management…there was nothing to report and that the cockpit was not autocratic”. The First Officer “stated that he had been overconfident during the approach, even though he was not enthusiastic about visual approaches” and that he had “gone along with” the PIC's decision to seek and accept a visual approach. However, he accepted that “he had perhaps been unable to express his viewpoint strongly enough to revert to the initial scenario envisaged during the (approach) briefing and once on the visual approach he was always playing catch-up despite the fact that he was the PF (and) was so focused on the minimum stabilisation height that everything else went unnoticed”. The aircraft commander stated that during the final approach, he had been focusing on the ILS GS display, which according to him was OK, and “had at no time looked at the ILS LOC”. 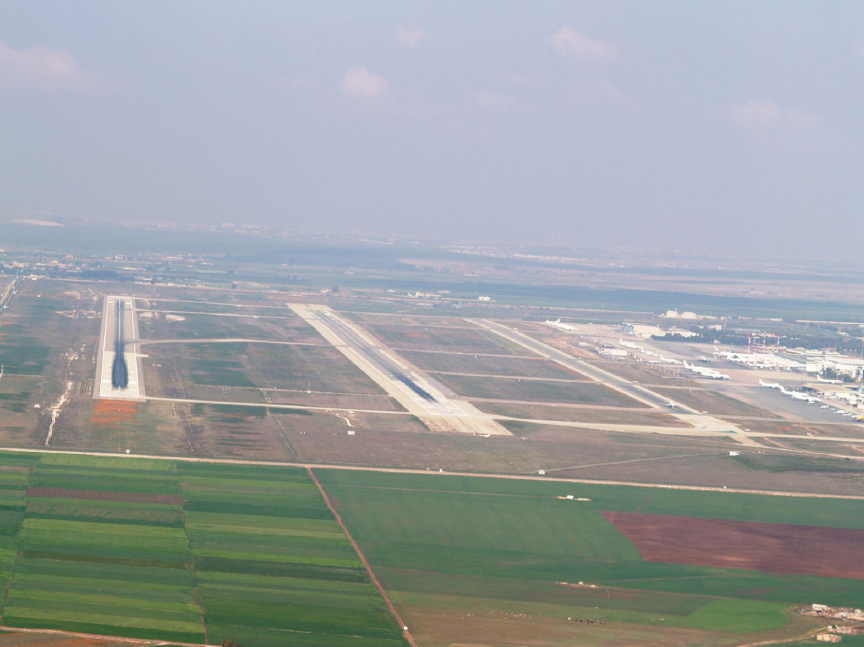 The Probable Causes were determined as:

Three Safety Recommendations were made as a result of the Investigation, at its conclusion, as follows:

A reminder was also issued in respect of an earlier Safety Recommendation which had been made:

The Final Report of the Investigation was issued in a French language version only on 22 August 2012 and is also available here on SKYbrary in an [unofficial English language translation].
Editor's Note:

At the time of upload, the Official Investigation Report incorrectly described the aircraft involved as an AIRBUS A-320. It also referred to the Royal Air Maroc aircraft which observed and reported the wrong runway landing to ATC after holding clear of the runway involved despite holding a clearance to cross it as (variably) either RAM560 or AT560 - these being respectively the ICAO and IATA airline designations.