On 21 September 2012, an SAS A319 which had just landed normally under the control of an experienced pilot left the paved surface when attempting to make a turn off the RET at a taxi speed greater than appropriate. The pilot was familiar with the airport layout and the misjudgement was attributed in part to the fact that the pilot involved had recently converted to their first Airbus type after a long period operating the DC9/MD80/90 series which had a different pilot eye height and was fitted with steel rather than the more modern carbon brakes.

On 21 September 2012, an Airbus A319 being operated SAS on a passenger flight from Oslo to Copenhagen and which had just landed at destination lost directional control in daylight and normal ground visibility and left the paved surface onto grass where a right turn from the rapid entry taxiway (RET) onto an almost-parallel taxiway is required. The nose landing gear became embedded in the soft surface and the aircraft stopped. There were no injuries to the occupants who were subsequently transported to the terminal by bus. The left hand engine ingested parts of some signage hit during the excursion and the cowling and fan were damaged. 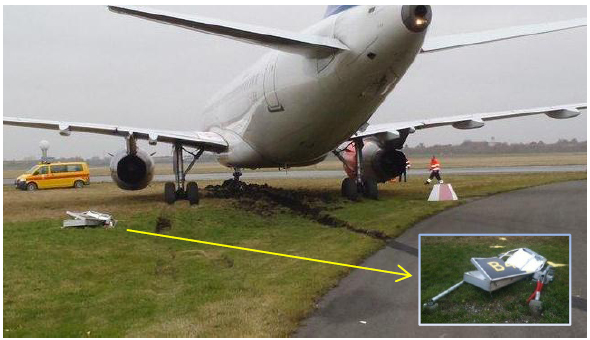 An Investigation was carried out by the Danish AIB with assistance of downloaded Flight Data Recorder (FDR), Cockpit Voice Recorder (CVR) and ACMS information. It was found that the aircraft commander, who was acting as PF, was new to the aircraft type but that the First Officer was “an experienced A320 series pilot”.

It was established that the aircraft commander had landed the aircraft on runway 22L and selected the reversers to the FWD IDLE position before the aircraft turned to the right to enter the RET designated as B4 - aligned at 30° to the runway centreline - at 45 knots ground speed (see diagram below). Braking had been ineffective and inappropriately biased towards use of the left brakes. As the 142° turn further to the right at the end of the RET was approached, there were surface skid marks showing that the nose wheels had lost traction with the groundspeed by then recorded as 31 knots - 12 knots higher than the design maximum speed for the aircraft inertia which was calculated by the Investigation based on the radius of turn and aircraft inertia. At this speed, the prevailing inertia had then exceeded the capability of the nose wheel steering to turn the aircraft in the direction of the curve and the nose landing gear ended at a significant angle to the direction of aircraft movement - up to 70°- and the aircraft skidded almost straight ahead and onto the grass. It was found that surface friction on B4 had been good and it was considered that “consistently braking on the straight part of B4 could have prevented the serious incident”. 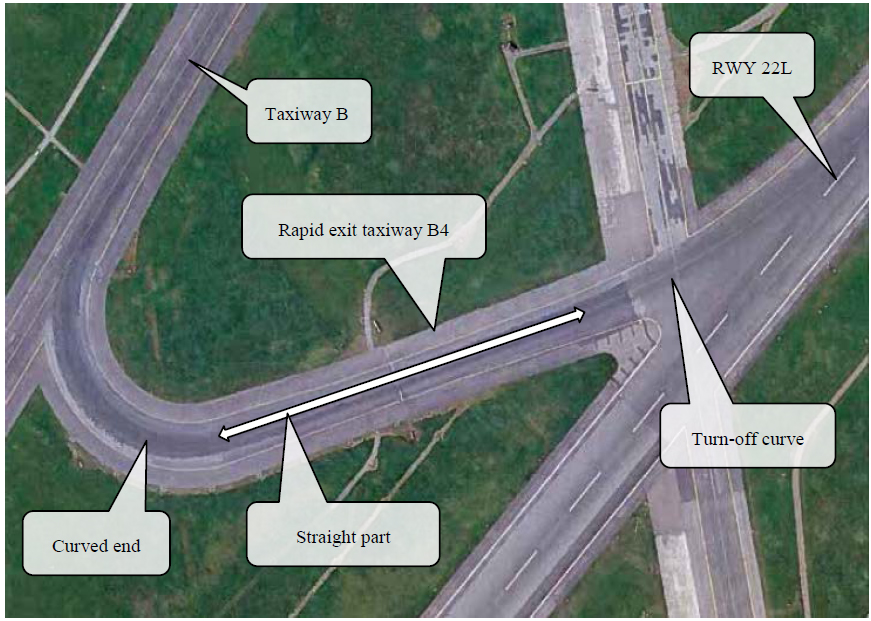 Rapid exit taxiway B4 at EKCH (reproduced from the Official Report)

It was noted that the commander had not made use of the ground speed indication available at the top left corner of the ND and that the First Officer had been ‘head down’ whilst occupied with the checklist and had been unaware of the situation before the aircraft began to skid.

It was found that there was no taxi speed limitation in the FCOM or the AFM but noted that the FCOM did include the statements that:

The A320 series FCTM was found to state that “for turns of 90° or more, the aircraft speed should be less than 10 knots”.

The aircraft commander reported that he had biased his brake application towards use of the left pedal because he had observed that the right brakes were warmer but no evidence was found of any hot brake discs and it was considered that this perception had been erroneous. The Investigation attributed this partly to the relatively low A320 series type experience of the pilot involved (76 hours and few landings) after a long period on the MD-80. It was also considered that the same pilot’s handling of the aircraft brakes generally and of the thrust reversers during landing confirmed this view - in effect, the pilot “operated the aircraft systems as he would have operated the systems of a MD-80 aircraft” which has steel brake discs rather than carbon ones. The Investigation also considered that higher pilot eye level above ground level of the A319 compared to that of the MD-80 (1.2 metres) would have created an impression of being at a lower ground speed than the actual one.

The Investigation also concluded after making inquiries of other SAS crews and noting the guidance provided by the Company that because the runway exit used was an RET, the subsequent encounter after a relatively short distance with quite a sharp curve was habitually but unconsciously overlooked by SAS pilots still focused on their presence on an RET.

The Investigation reviewed the design of taxiway B4 in respect of the transitions at either end and found that there were no deviations from the requirements described in ICAO Annex 14. It was established from friction testing that although taxiway B4 had been damp, braking action at the time of the excursion would have been good.

It was found that SAS aircraft had been involved in similar incidents at the exit from taxiway B4 onto taxiway B in the past, most recently two months earlier when an MB87 had also experienced a loss of directional control but had stopped just before departing the paved surface. This aircraft had entered taxiway B4 at 58 KIAS and by the time directional control had been lost, the speed was 31 KIAS or below (no recorded ground speed was available from the FDR on this aircraft type).

Ineffective braking was a contributing factor to the high ground speed at the end of the straight part of taxiway B4. The ground speed was approximately 12 knots above the curve design speed and therefore led to the serious incident. The inertia (mass/speed) of the aircraft exceeded the friction ability of the nose wheel tires leading the aircraft to skid off the curved end of taxiway B4 onto the grass area.

Contributing human factors to event were identified as:

Safety Action taken by SAS as a result of the event included a reminder that maximum ground speed for the turn involved was “only 20 knots on DRY surface and favourable circumstances. Any contamination will call for an even lower speed” and a few days later the following sentence:

“The design of the high speed exit is according to ICAO standards, with a speed limitation of 15 knots on DRY surface. This calls for a significant lower speed in wet or contaminated conditions”.

In addition, the Airport Operator decided to publish a Notice To Airmen as follows:

”RWY 22L leaving rapid exit TWY B4, the curved end of TWY B4 is designed for a max 15 knots in dry conditions only. Hotspot chart will be issued SAP in AIP Denmark, AD2-EKCH-ADC”.

The Final Report of the Investigation was published in English during 2013. No Safety Recommendations were made.