On 3 August 2018, smoke appeared and began to intensify in the passenger cabin but not the flight deck of an Airbus A319 taxiing for departure at Helsinki. Cabin crew notified the Captain who stopped the aircraft and sanctioned an emergency evacuation. This then commenced whilst the engines were still running and inadequate instructions to passengers resulted in a completely disorderly evacuation. The Investigation attributed this to inadequate crew procedures which only envisaged an evacuation ordered by the Captain for reasons they were directly aware of and not a situation where the evacuation need was only obvious in the cabin.

On 3 August 2018, an Airbus A319 (OK-PET) being operated by Czech Airlines on an international passenger flight from Helsinki to Prague as OK 481 was taxiing for departure from runway 22R when the cabin crew became aware of smoke in the cabin. As it intensified, the Captain was notified and after stopping the aircraft agreed that an emergency evacuation should be performed. It was then initiated by the cabin crew but proceeded in a disorderly manner which extended the time taken and placed evacuated passengers at risk. A total of 26 of the 135 passengers sustained minor injuries during the evacuation.

An Investigation into this Serious Incident was carried out by the Safety Investigation Authority of Finland (SIAF). Relevant data were downloaded from both the CVR and DFDR. The former ceased recording when the engines were shut down even though it should have continued recording for a further five minutes but provided useful information about the interphone conversations between the flight and cabin crew during the event. The DFDR provided useful information about aircraft systems and the manner they were used and also included the exact time when the aircraft doors were opened and when the engines were shut down. It did not record any smoke or fire warnings. Various other logs and recordings of communications between those involved in the response were also available as were airport CCTV recordings and photographs taken by passengers.

Whilst the aircraft was on taxiway ‘D’ heading towards departure runway 22R, a number of passengers saw grey smoke in mid-cabin which was intensifying and attempted to alert cabin crew. Some pressed their call buttons and others “were shouting and banging on the wall to catch the cabin crew’s attention”. One of the two cabin crew stationed in the aft cabin reported the situation to the senior cabin crew member (SCCM) by interphone and both then “grabbed halon extinguishers and began to find the source of the smoke”. The SCCM in turn reported the smoke to the Captain by interphone and requested permission for an emergency evacuation but “hung up before receiving an answer”. At this point, some passengers were reported to have stood up and begun shouting to the cabin crew that there was smoke inside the aircraft.

It was reported that “during the evacuation some passengers rushed past slower-moving passengers, children were trampled over and passengers stumbled over cabin baggage in the aisle". In addition, when the main exits were opened, the engines were still running and the two cabin crew at the rear exits had to prevent passengers using these exits for a total of 33 seconds because the evacuation slides were “flapping and askew” due to the jet efflux. The first passengers to leave the aircraft did so using the forward left door, emerging directly ahead of a running engine in respect of which it was noted that the “intake suction danger area” (the risk of objects being ingested into the engine) extends 2.2 metres forward of the engine air intake. 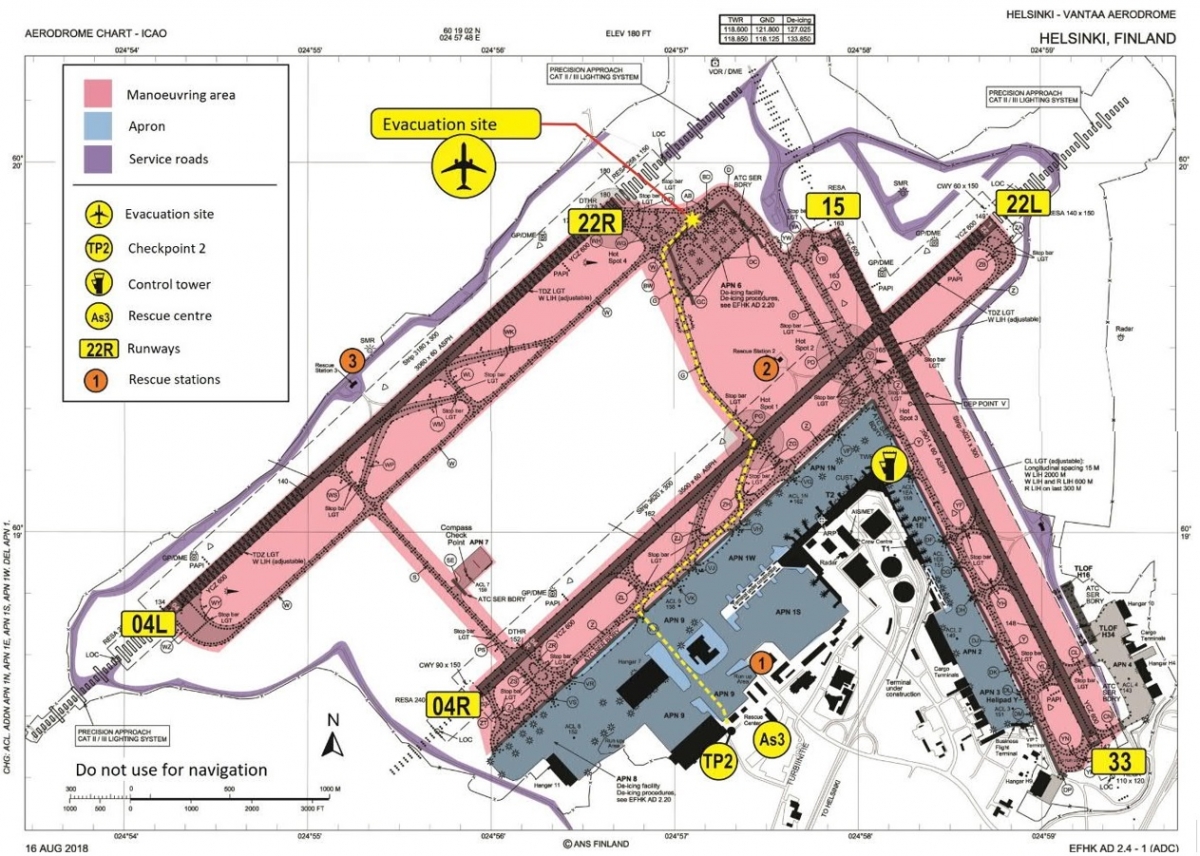 The Aerodrome Chart showing the taxi route of the aircraft and the evacuation site. [Reproduced from the Official Report]

The opening of the doors generated an ECAM alert and in response, the First Officer shut down both engines by using the fire pushbuttons rather than the engine master switches. The flight crew reported that only then did they begin running the appropriate checklist procedures. The last of the 135 passengers was recorded as having left the 144 seat aircraft just over 2½ minutes after the evacuation had commenced. It was found that the two overwing exits located between rows 9 and 10 were not opened during the evacuation because passengers were “unable to open them” which added to the evacuation time. It was not clear whether passengers sitting nearest to the two overwing exits had received a one-to-one briefing on their use from a member of cabin crew.

On receipt of the call from the aircraft of smoke from the cargo department and an imminent emergency evacuation, the controller taking this call then pressed a yellow alarm button, which communicated that there was “a full aviation emergency alert” to the airport RFFS, the regional Emergency Response Centre (ERC), the local area Rescue Department and to the airport’s central security control room. It was noted that the latter was the responsibility of the airport’s security contractor and was responsible for “dispatching escort vehicles to protect ground traffic at the airport”. The controller also made a PA call to the RFFS confirming the alert. Two minutes later, the controller elevated the “full emergency” to an “accident” by pressing the red alarm button and notified the RFFS that an emergency evacuation was in progress and that smoke inside the cargo compartment had been reported by the flight crew. All units advised of the situation responded in accordance with their applicable procedures with the first RFFS tenders reaching the site in just over a minute.

Departures from runway 22R were immediately suspended and preparations were made to stop landings on runway 22L so that emergency service vehicles could cross it en route to the aircraft. Whilst en route to the aircraft, the RFFS Shift Supervisor, accompanied by other vehicles, used their radio to order that the cargo holds be kept closed until the aircraft evacuation had been completed and ordered airport buses for use in transporting the evacuated passengers back to the terminal and passenger airstairs to enable entry and inspection of the aircraft once evacuated. However, when these vehicles requested permission to cross ruway 22L, this had not been anticipated by ATC and was denied until an aircraft on final approach had been allowed to continue to a landing instead of being instructed to go around. Arrivals were then moved to runway 15 until the emergency was over.

On eventually reaching the aircraft, the RFFS Shift Supervisor found that the evacuated passengers had been left unsupervised on the manoeuvring area for nearly eight minutes, many close to the newly active landing runway 15. He parked the lead vehicle some distance from the aircraft and told the passengers to gather behind it and wait for bus transport to arrive. He then located the Captain who confirmed that everyone was off the aircraft. The underfloor cargo compartment was then inspected with no evidence of fire found and with the arrival of the requested airstairs, an internal inspection of the aircraft was carried out, also with no findings.

The Source of the Smoke

The source of the smoke was found to have been the right Liebherr Air Cycle Machine (ACM) which was found to have a failed main bearing and seized rotor, a combination which had created the smoke observed to be building up in the cabin. This item had run 28067 hours since new. Before removal of the failed unit, it was demonstrated that running the engines at idle thrust not only generated smoke but simultaneously generated ECAM warnings of both AIR PACK 2 FAULT and AIR PACK 2 OVERHEAT. The flight crew made no reference to the appearance of either of these system warnings, the appearance of both of which would have required QRH action.

Editor’s Note: this ACM is an on-condition component for which there is a repair scheme that is dependent on flying hours and cycles. No information on prior maintenance inputs in relation to this unit were included in the report.

Discussion on the Evacuation

It was noted that the Flight Crew Emergency Evacuation Checklist was implicitly written on the assumption that any such evacuation would be initiated on the basis of information available directly to the fight crew rather than at the request of the SCCM based on circumstances in the cabin. However, execution of this Checklist is primarily designed to prepare for an evacuation and it ends with an instruction to initiate an evacuation if required. The failure of the flight crew to run this checklist or execute it accurately from memory and then directly initiate the evacuation by announcing it over the PA system three times and for the First Officer to then de-plane the aircraft to assist passengers on the ground could not be explained on the evidence available. It was also not clear why the Captain had informed ATC that there was “smoke inside the cargo compartment” instead of the smoke in the cabin which he had been made aware of.

It was also not clear to what extent the cabin crew had followed their own procedures for conducting an evacuation. These required them to “firmly guide the passengers by using clear announcements and commands” by use of a megaphone as much as possible. It was noted that the circumstances where cabin crew are authorised to initiate an evacuation on their own initiative were procedurally confined to a situation which is considered “life-threatening” and no contact with the Captain is possible. This meant that their action in this event in seeking orders from the Captain when they considered an evacuation necessary were correct.

In respect of ATC service, it was noted that the Airport Ground Operations Manual requires “all departures and landings” to be suspended if they observe an air accident at or near the airport (the condition which required the red alarm button to be pressed by the controller).This Manual then required that ATC “must allow the rescue units to freely drive to the occurrence site so long as aviation safety is not compromised”. It was not clear why this did not happen given that the notified “accident” occurred within the designated manoeuvring area. It was noted that there were “no procedures in place for escorting rescue department vehicles without delay to an accident site which is on the manoeuvring area” nor were there “any standard procedures for how the escorts should meet the units to be escorted”.

It was observed that “these inadequacies have not emerged in emergency exercises” and also that ATC lacked sufficient information about their role in accident situations. The failure ATC to follow existing instructions that all departures and arrivals must be held back when an accident happens was noted as was the fact that air traffic controllers do not normally participate in airport emergency exercises.

Four Conclusions from the Investigation were formally documented:

Safety Action taken by Finavia, the operator of Helsinki Airport, during the course of the Investigation was noted as having included the following: