On 19 June 2016, an Airbus A320 failed to follow the clearly-specified and ground-marked self-positioning exit from a regularly used gate at Ibiza and its right wing tip collided with the airbridge, damaging both it and the aircraft. The Investigation found that the crew had attempted the necessary left turn using the Operator’s ‘One Engine Taxi Departure’ procedure using the left engine but then failed to follow the marked taxi guideline by a significant margin. It was noted that there had been no other such difficulties with the same departure in the previous four years it had been in use.

On 19 June 2016, an Airbus A319 (G-EZGE) being operated by Easy Jet on an international passenger flight from Ibiza to London Stansted collided with the airbridge which had previously boarded its passengers whilst beginning the self-positioning from its gate at Ibiza at night in good visibility and dry conditions. One member of the cabin crew fell over and sustained a minor injury and minor damage was caused to both the airbridge and the aircraft right wing tip and outboard slat. 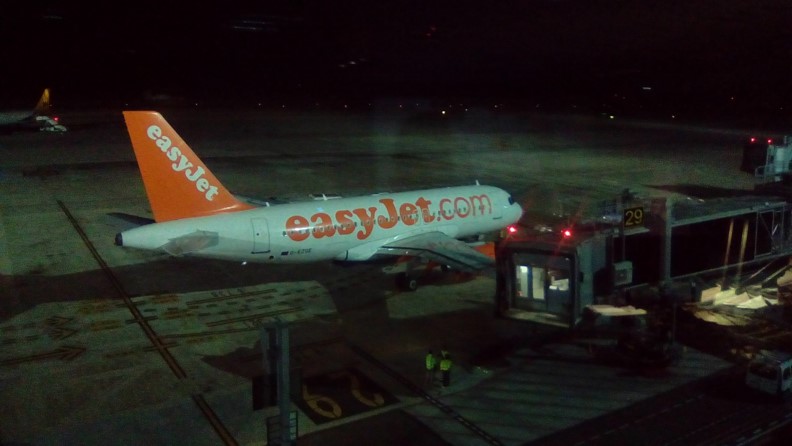 The aircraft with its right wing tip impaled on the air bridge. [Reproduced from the Official Report]

It was noted that the exit from the gate involved - 29 - was marked in such a way that after removal of the airbridge, the aircraft moves forward 3 metres and then starts a 180º turn such that the closest part of the aircraft to any object such as the airbridge, terminal buildings or parked vehicles/equipment is - for a Cat ‘C’ aircraft like the A319 - at least 4.5 metres away. The Stand 29 chart (see below) shows the tracks to be taken by the various aircraft types that are permitted to self manoeuvre off the stand, which include most aircraft up to the size of the Boeing 737-800 and the Airbus A321. The A319 is expected to be able to follow the tighter of the two turns shown with broken lines on this chart. 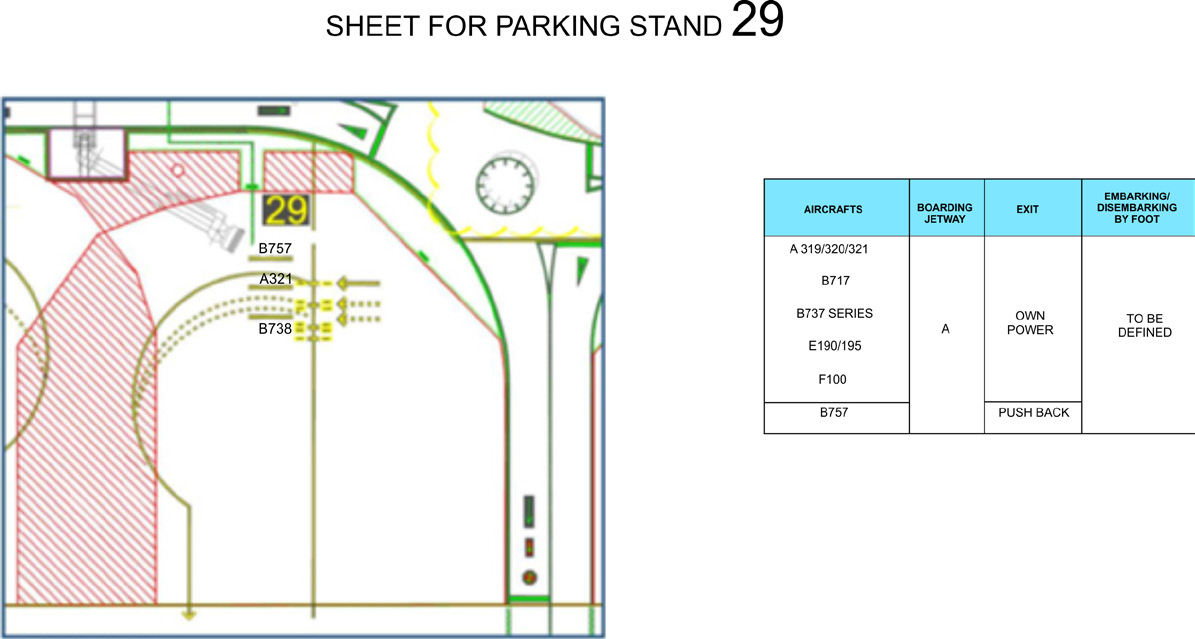 Stand 29 showing how aircraft should exit the stand. [Reproduced from the Official Report]

It was found that the aircraft “was unable to turn at the required rate” with the nose wheels being at one point 6 metres to the right of the guidance line marked on the ground. Airport personnel stated that the aircraft had been observed to move “in a series of small turns with the nose wheels being straightened in between each one” and that “from the start it did not follow the exit line painted on the apron for this type of aircraft, and instead widened the turn to the right” so that it ended up facing Stand 28 and “encroaching on much of the hatched no parking area between the two stands” affecting the departure of another aircraft that was to be pushed back from stand 28. It was found that as the turn progressed, the supervising ground crew lost sight of the Captain and, although they could see the First Officer, were unable to gain his attention because (in accordance with Company procedures), he was focussed on watching the right wingtip. Whether for this or other reasons, no ‘emergency stop’ was signalled. By the time the aircraft hit the airbridge, it had only turned through about 90° when by then it should have turned through about 130° - see the illustration below. 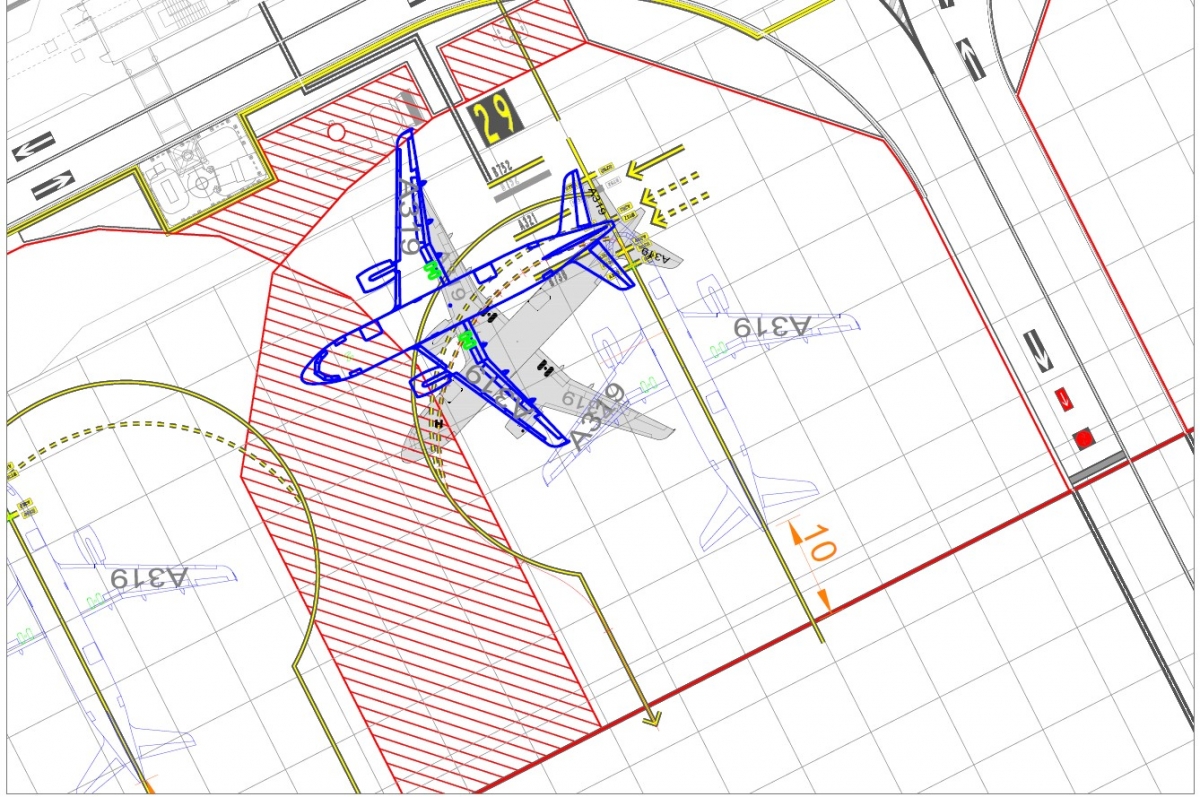 The aircraft position in contact with the airbridge and where it should have been. [Reproduced from the Official Report]

It seems that the observed alternation between turning and taxiing ahead was a consequence of attempting the left turn without using both engines (or applying the Operator’s fuel saving ‘One Engine Taxi Departure’ (OETD) procedure to the right engine) and the crew subsequently accepted that the use of both engines “would have increased their ability to turn”. The EasyJet Operations Manual content on single engine taxiing was found to include the use of Captain’s discretion in deciding whether it was appropriate and, whilst stating that the left engine would “normally be started first”, to expressly require “the direction and degree of any turns” to be taken into consideration.

The Cause of the collision was found to be “the failure of the aircraft to follow the guide line for this aircraft type to taxi out of the parking stand”.

The Final Report of the Investigation was approved on 27 September 2017 and subsequently made available in English language translation. In view of the action by AENA to require all aircraft to be pushed back out of stand 29, it was deemed unnecessary to issue any Safety Recommendations. It was, however, noted that whilst this action was “viewed favourably”, the lack of a pushback requirement for the A319 involved was “not regarded as the primary cause” of the investigated event.