On 10 May 2014 the crew of an Airbus A319 failed to manage their daylight non-precision approach at destination effectively and it culminated in a very hard touchdown which exceeded landing gear design criteria. The Investigation concluded that the comprehensively poor performance of both pilots during the preparation for and execution of the approach could be attributed to both their repeated failure to follow SOPs and retain adequate situational awareness and to a failure of the aircraft operator to fully deliver effective training even though both this training and its SMS met relevant regulatory requirements and guidance.

On 10 May 2014, an Airbus A319 (C-FZUG) being operated by Air Canada Rouge as flight AC1804 on a scheduled international passenger flight from Toronto to Montego Bay made a hard landing which exceeded landing gear design criteria at destination after an unstabilised non-precision approach in day VMC and was thus unfit for further flight. There was no structural damage to the aircraft or injury to its occupants.

An Investigation was carried out by the Canadian Transport Safety Board. FDR and CVR data were recovered and used to assist the Investigation.

It was established that, having previously been "unaware" that the runway 07 ILS approach at Montego Bay was not available despite inclusion of the relevant NOTAM in their "flight release documentation", the crew had already briefed for the ILS approach. When offered either an RNAV or VOR/DME approach to the same runway at a relatively late stage in the flight and accepted the latter, the necessary re-brief was carried out only 12 minutes before landing and specified a managed (automation-performed) approach. The Jeppesen plate used for the approach is shown below. 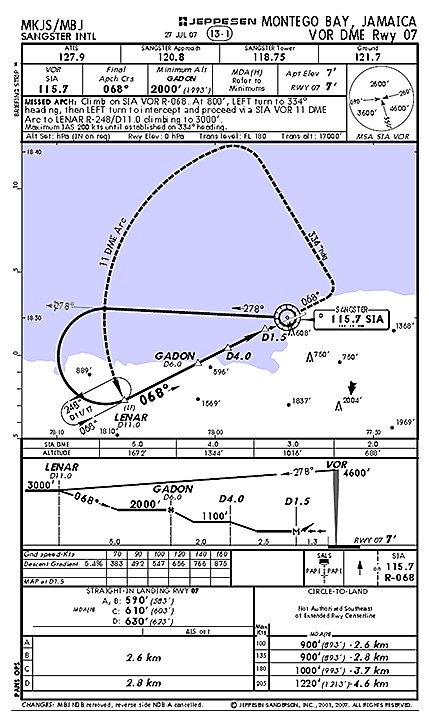 The VOR/DME Approach Plate for the approach flown. [Reproduced from the Official Report]

The flight crew had then held "a non-operational conversation" lasting nearly 3 minutes which ended approximately 8 minutes prior to touchdown as the aircraft descended though 10,000 feet. Two minutes later, ATC queried whether the aircraft would be able to proceed direct to LENAR and this was answered in the affirmative. With the airspeed at 250 KIAS and the aircraft level at 3,000 feet and tracking towards LENAR, the PF selected a target speed of 190 KIAS on the FCU and the A/T effected a corresponding thrust reduction.

With the aircraft about to turn directly onto the FAT just inside LENAR, the PF requested flaps 1. The aircraft established in the FAT at approximately 9.6 nm from the threshold with the airspeed of approximately 200 KIAS and began its final descent. During the next minute, the FMA modes changed as expected to 'NAV' and 'FINAL DES', and the selected speed was successively set to 180, 190, 200, and finally to the calculated Vapp of 134 knots. The rate of descent reached 2,000 fpm but began to reduce once the selected speed had been reset to Vapp.

The FAF was crossed at the correct height of 2000 feet at Vapp + 54 knots. Flaps 1 were still selected contrary to the applicable SOP of Flaps 3. The PF selected the correct 3.2° FPA and in response, the FMA modes changed to TRK and FPA. The crew did not make the SOP calls for the FAF position or complete SOP actions for the position. The latter included setting the missed-approach altitude in the FCU.

As the aircraft descended through 1,780 feet approximately 5.2 nm from the runway threshold at 186 KIAS, the AP was disconnected and the remainder of the approach was flown manually by the PF. Flaps 3 was then requested - but the PM only selected Flaps 2 (without a corresponding callout) due to the airspeed being marginally above the limit for Flaps 3. Landing clearance was given and a few seconds later, the ALT/SEL (with 2,000 feet selected) was pulled. Since the aircraft was below that altitude, the A/T increased engine thrust from 34% to 87% but since the aircraft was now in manual flight, no climb followed, only an increase in airspeed. As the aircraft momentarily levelled off at 185KIAS approximately 4.5 nm from the runway, the PM selected Flaps 3 but as the speed increased due to high thrust, a Flap Overspeed Warning was annunciated for 3½ seconds. No call for this selection was made. Further FCU inputs were made and the A/T was disconnected. The aircraft became aligned with the PAPI just inside 2nm from the runway. This put the aircraft inside the applicable mandatory Stabilised Approach gate which was at 690 feet (MDA + 100 feet) which was not called. By 500 feet, airspeed was Vapp + 21 and the aircraft was back on the vertical profile.

Touch down occurred with a 3.12g vertical load factor and a pitch angle recorded as 7.7° nose-up. The touch down speed was 108 KIAS and the position was calculated as having been less than 40 metres past the displaced runway threshold. With the ground spoilers extended and the autobrake activating normally, reverse thrust was selected and the aircraft subsequently taxied off the runway to its parking gate without further incident. Once there, the crew reported the hard landing and the FDR data was reviewed and appropriate maintenance inspections performed. It was found that both main landing gear assemblies had been subjected to a high load exceedance. With the approval of both Airbus and Transport Canada, authority was obtained to position the aircraft out of service to Miami with the landing gear locked down where the main gear shock absorbers were replaced in accordance with Airbus recommendations.

It was noted that the normal landing technique is to reach 30 feet agl at Vapp in a stabilised condition and begin a progressive flare while simultaneously closing the thrust levers to achieve idle before touchdown. In the investigated case, full nose-up side-stick input was applied in the prematurely commenced flare and the calculated true AoA eventually exceeded 15° with the elevator position oscillating between 1° and 5° nose-up. It was noted that this sequence is consistent with activation of the aircraft's high-AoA protection system. This is designed to enable the PF to "pull the side-stick fully aft and achieve the best possible lift, minimising the risk of aerodynamic stall or control loss".

It was found that according to the Air Canada Rouge stabilised approach criteria, the aircraft was "stable at the FAF arrival gate" even though its airspeed was 54 knots above Vapp and was not configured with the proper flap setting as per configuration SOPs. The aircraft had not been stable at the subsequent mandatory arrival gate "because of its excessive airspeed, vertical speed deviations, incomplete landing checklist, and unstabilised thrust".

A range of other SOPs had been breached during the approach including the following:

Various flap and gear selection calls and landing checks during the final approach segment are compared with the actual occurrence sequence in the illustration below. 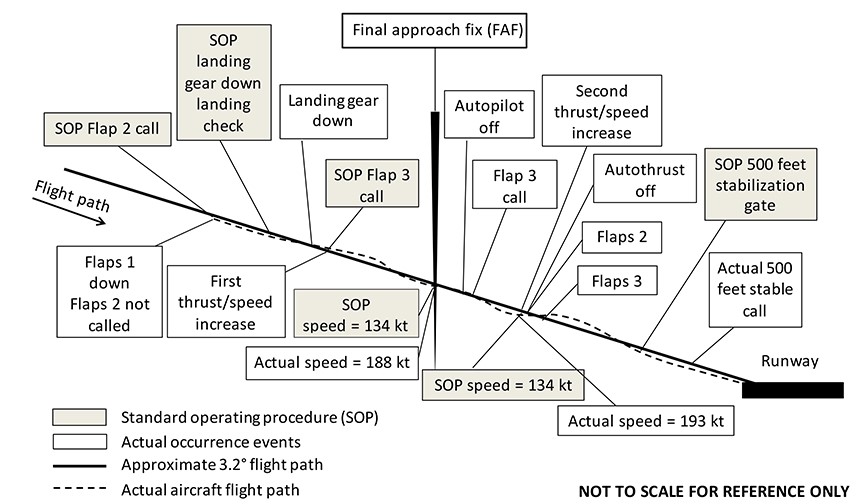 A comparison of actual events with prescribed SOPs. [Reproduced from the Official Report]

The Investigation noted that Air Canada Rouge had a pilot training programme explicitly approved by Transport Canada and an SMS which met all their guidelines. Nevertheless, the long history of unstabilised approaches leading to accidents and serious incidents at Canadian operators was continuing. A number of aspects of the investigated event which had contributed to the continuation of an unstabilised approach to a landing were identified as relevant to the poor pilot performance in this investigated event and interpreted as the consequence of "ineffective defences":

More generally, the Investigation also identified the absence of an adequate specification of the frequency and delivery of relevant pilot training in automation proficiency.

The formal statement of Causes and Contributory Factors was as follows:

Findings as to Risk were also identified as follows:

Safety Action taken by Air Canada Rouge as a result of the event was noted to have primarily included significant enhancements to recurrent pilot training. This now includes simulator training in unstable approaches leading to a go-around and more manual flying, including CFIT recovery, steep turns, approach to stall, upset recovery, autothrust disconnection and reconnection and operations with autothrust off. New and/or improved recurrent training modules on distraction, leadership and professional standards including "open communication" and dealing with SOP non-compliance by the other pilot have also been introduced and the Company has also "refined" the SOPs which cover its stable approach policy.

The Final Report of the Investigation was authorised for release on 13 October 2016 and officially released on 9 January 2017. No Safety Recommendations were made.