On 10 October 2016, an Airbus 319 was cleared to divert to its first alternate after failing to land off its Cat II ILS approach at Porto and obliged to land at its second alternate with less than final reserve fuel after the first alternate declined acceptance due to lack of parking capacity. The Investigation concluded that adjacent ATC Unit coordination in respect of multiple diversions was inadequate and also found that the crew had failed to adequately appraise ATC of their fuel status. It also noted that the unsuccessful approach at the intended destination had violated approach ban visibility conditions.

On 10 October 2016, an Airbus 319 (CS-TTD) being operated by TAP Portugal on a scheduled domestic passenger flight from Madeira to Porto as TAP 1710 was unable to land off its delayed first approach in poor visibility and its crew intended to initiate a diversion to their first alternate Vigo as pre-advised to Porto ATC. However Porto ATC then advised that there was no longer any parking capacity at Vigo and they would have to continue north to Santiago de Compostela where, after declaring a MAYDAY FUEL, an uneventful landing was then made with remaining fuel below ‘Final Reserve’.

The event was not notified to the Spanish Commission for the Investigation of Civil Aviation Accidents and Incidents (CIAIAC) until 11 days after it had occurred, at which point relevant recorded data from both the CVR and FDR were no longer available. However, TAP supplied a file of relevant data from the QAR which was equivalent to that which would have been recorded on the FDR together with the corresponding parameter data frame file. It was noted that the 45 year-old Captain had accumulated a total of 7,905 flying hours which included 3,890 on type and the 29 year-old First Officer had accumulated a total of 4,000 flying hours which included 2,500 hours on type.

It was established that the pre-flight briefing materials provided by flight despatch personnel to the flight crew prior to their departure from Madeira had not mentioned that LVP were already in place at Porto and had been for over 4 hours and provided only a 24 hour TAF issued 6 hours prior to departure, which made no mention of fog and only a PROB40 of cloud as low as 300 feet. However, since the METAR provided indicated that this forecast did not fully reflect actual conditions, the crew loaded sufficient additional fuel to be able to hold for 30 minutes and taxied with 1,191 kg more fuel on board than was required by their OFP.

The cruise was made at FL380 as per the OFP and on approaching their destination, ATC instructed the flight to take up the hold as there were delays due to the weather. The ATIS copied by the crew gave the wind calm, landing runway RVRs as 275 metres, 325 metres and 275 metres, and the ‘Vertical Visibility’ as 100 feet. The hold was maintained for almost half an hour during which time the crew confirmed that the weather at their first alternate, Vigo, was favourable. Porto APP then cleared the flight to begin an ILS Cat II approach to runway 17 and they were informed by the crew that in the event that they were unable to land, they would want to proceed to Vigo. On transfer to TWR, a landing clearance was given and the RVRs were advised as 200 metres, 325 metres and 350 metres. The crew repeated their previous message that they would be diverting to Vigo in the event of a go-around.

A go around was subsequently flown from when the required visual reference was not available at the 100 foot Cat II DA with the minimum recorded height of 65 feet agl recorded. On advising their go around to TWR, the crew reiterated their request to proceed to Vigo. They were transferred back to APP and were cleared to climb to FL 120 heading north. However, a few minutes later, the APP controller notified them that Santiago ACC had advised that Vigo Airport had no more parking space and so they would have to continue to Santiago de Compostela. Less than a minute later as the instructed frequency change to Santiago APP was being actioned, a ‘FUEL L WING TK LO LVL’ Alert was annunciated followed after a further six minutes by a ‘FUEL L+R WING TK LO LVL’ Alert. ' 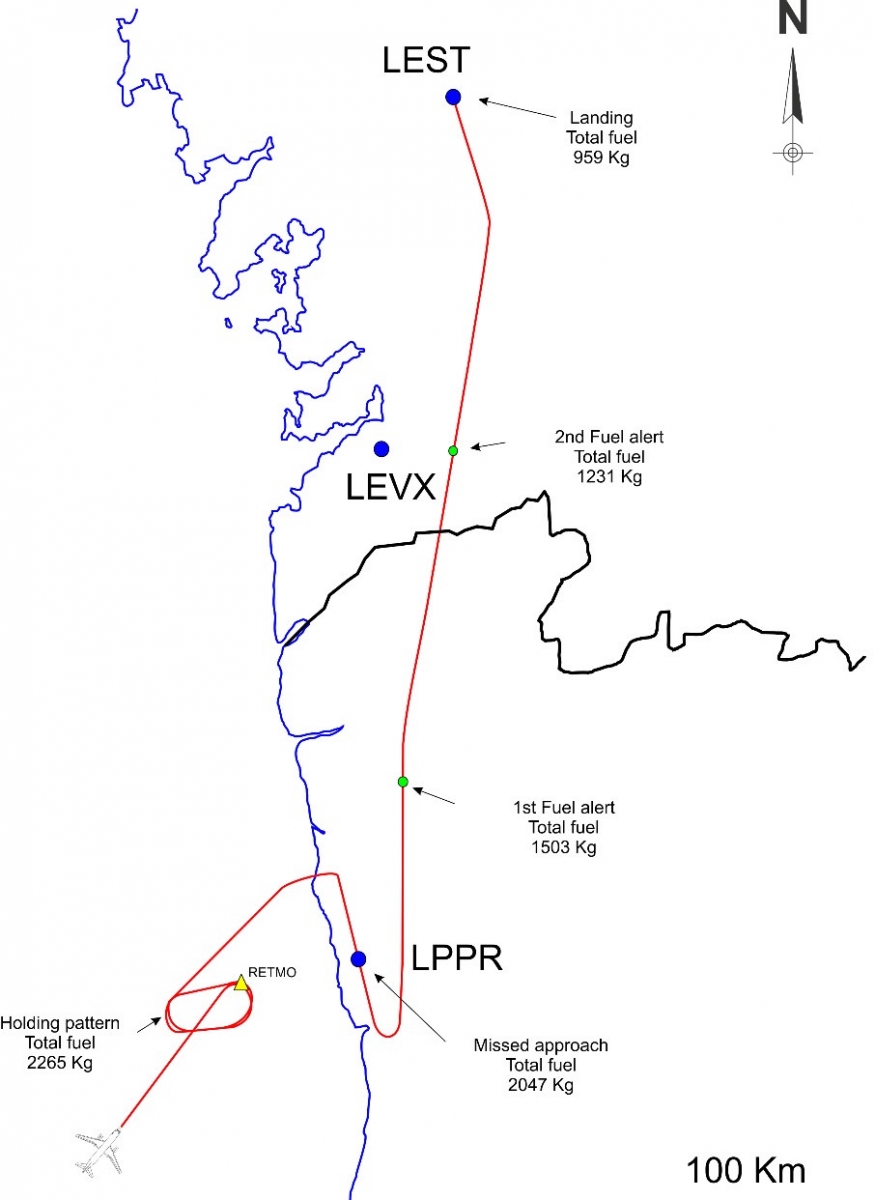 After a further seven minutes, the crew declared a ‘MAYDAY FUEL’ to Santiago APP on calculating that it was likely that they would land with less than ‘Final Reserve Fuel’ on board. After making a VOR approach to runway 35 at Santiago, a landing was made and after shutting down the engines after arrival on stand, they recorded 940 kg of fuel remaining, 49 kg less than the ‘Final Reserve’ figure. It was noted that weather conditions at both Vigo and Santiago de Compostela were at or near CAVOK with light winds as forecast.

It was noted that the weather information available to the crew did not indicate a RVR in the first third of the runway in excess of 300 m during the time that the crew were holding at or during the approach to Porto. However, the approach was nevertheless continued to the Cat II minimum height before it was discontinued. In this respect the Part ‘A’ of the TAP Portugal Operations Manual was found to clearly state that if the applicable (first third) RVR on a Cat II approach was last notified as less than 300 metres, then if an approaching aircraft reaches 1000 feet aal, the approach must be abandoned. It was noted that TWR had passed the final (still below minima) RVRs as the aircraft was passing 1,326 feet aal.

In respect of the crew communications with ATC about their fuel status, it was noted that the procedures specified in ICAO Annex 6 on the successive declaration of ‘MINIMUM FUEL’ and ‘MAYDAY FUEL’ under specified fuel endurance conditions were replicated in Part ‘A’ of the TAP Portugal OM but had not been followed. This had deprived ATC of a full appreciation of the aircraft fuel endurance relative to possible diversions.

The Investigation also examined in some detail the formal procedures relating to arrangements for communication of limitations on the acceptance of diversions at Vigo and the various related exchanges which had taken place on the day. It was noted that the flight under investigation was the first to be refused a diversion to Vigo and that arrangements to accept the last aircraft accepted by Vigo after diversion from Porto were made six minutes before the TAP A319 left the Porto holding pattern to begin its approach. This meant that a more timely notification to Porto from Vigo that they were at full capacity would have allowed the A319 to be “diverted to its second alternate without incurring fuel problems”. It was also found that “the LoA between Porto APP and Santiago ACC did not include any procedures for managing use of airports as alternates".

The Cause of the event was formally stated as “the improper management of the capacity at the alternate airports by the stations involved during adverse weather conditions and by the failure of the crew to issue a MINIMUM FUEL declaration, as specified in the operator’s Operations Manual, which would have allowed the Vigo Airport to adopt temporary extraordinary measures to receive the incident aircraft”.

One Contributory Factor was identified as:

Safety Action by the Spanish ANSP ENAIRE as a result of the event and known to the Investigation was noted as including the following:

The Final Report was approved on 27 September 2017 and subsequently made available in English translation.