On 5 February 2011, an Airbus A319-100 being operated by Air Berlin on a passenger flight departing Stockholm inadvertently proceeded beyond the given clearance limit for runway 19R and although it subsequently stopped before runway entry had occurred, it was by then closer to high speed departing traffic than it should have been. There was no abrupt stop and none of the 103 occupants were injured.

On 5 February 2011, an Airbus A319-100 being operated by Air Berlin on a passenger flight departing Stockholm inadvertently proceeded beyond the given clearance limit for runway 19R and although it subsequently stopped before runway entry had occurred, it was by then closer to high speed departing traffic than it should have been. There was no abrupt stop and none of the 103 occupants were injured.

After delayed notification of the event received on 10 February 2011, an Investigation was carried out by the Swedish AIB. It was established that a taxi clearance from Gate 66 to “holding point 19R” had been issued to the aircraft after pushback without specifying any particular holding point and that it had included permission to take a taxiway ‘D’, a route contrary to the prescribed system of directional flow (see diagram). 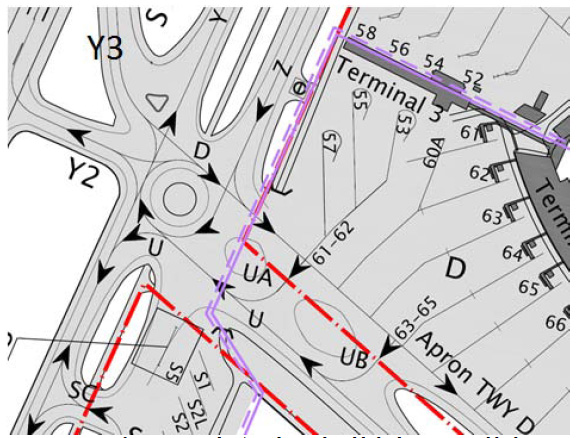 When the aircraft reached the selected runway access taxiway, Y3, it proceeded across an unseen but illuminated stop bar which had no corresponding painted surface markings towards the first transverse yellow lines encountered which were co-located with flashing Runway Guard Lights (RGLs). The controller saw visually that the aircraft was on the entry to a runway in use and called, "Air Berlin, hold position". This happened at the same time as another aircraft was taking off from further down runway 19R. When this aircraft was already at a speed of 120 to 130 knots, its pilots saw the taxiing aircraft approximately 500 metres ahead. During a subsequent interview one of the A319 pilots stated that “the aircraft had not passed the holding position since the aircraft stopped before the marking on the ground”. It was noted that “other pilots operating at Arlanda airport have said to the investigators that the stop bar in question can be difficult to see” in daylight.

It was subsequently established that the yellow lines at the RGL position were marking the old holding CAT 1 holding point and that the lit stop bar which had previously only been the Cat 2/3 holding point but had since become the combined Cat 1/2/3 holding point should have had co-located holding point markings for daytime use. It was found that “normally the painting of daylight markings is carried out annually, but there were no daylight markings by Y3 at the holding position”. The applicable regulatory requirement at the time was noted as “Holding positions shall be marked at all connections and intersections between taxiways and runways." The Investigation was unable to establish the reason for non-compliance in a way which might assist the avoidance of such a failing in future. The prevailing processes of Quality Assurance and Safety Management at the Airport were found to be of little assistance.

The version of the State AIP extant at the time of the occurrence was found to have no chart containing holding point markings or any other accurate illustration of their position in respect of Y3 (see second illustration) Several months afterwards, the necessary holding point marking was provided on Y3 and a corresponding AIP illustration was provided to properly show the holding point position. It was noted that whilst few flight crew make direct use of the AIP, it is the source used by contracted chart providers to produce accurate and useful information for their direct use. Unsurprisingly, the holding position marking visible on Y3 was not consistent with the taxi chart available to the A319 pilots (see third illustration) since the latter was based on the AIP. 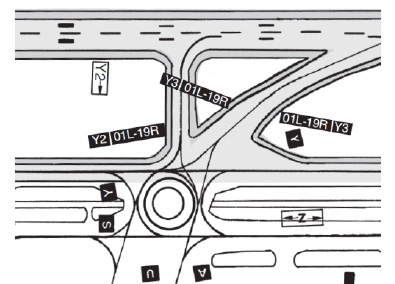 In general terms, it was considered that although the Investigation had focused only on a single holding position at the airport, the finding in respect of taxiway Y3 “has shown major shortcomings in work orders and quality follow-up”. It was considered "remarkable that no reviews of the area were made for a long time. There may well be a need for the airport to make a special inspection of all existing visual aids for navigation at the airport”. It was also noted that as far as the failure to properly program the missing painted surface marking was concerned, there was no readily traceable historical record as a means to examine why/how it had been overlooked. It was considered that this finding meant that both the prevailing circumstances and “the lack of quality inspection of paint work” both “constituted shortcomings in compliance with the safety management system”. 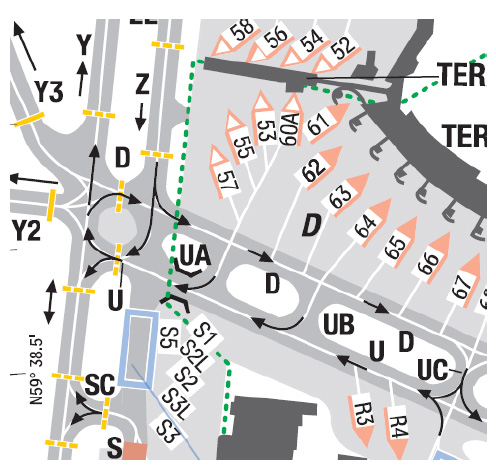 The Taxi Chart available to the A319 pilots - based on the AIP as it was at the time, it shows only the old Cat 1 holding point and neither the one in force at the time nor the stop bar (reproduced from the Official Report)

It was noted that the Airport SMS “is contained in a single document under the operational management system on the airport intranet”. It was considered that “this entails a risk that the connection between the system and daily operations is missed” It was also noted that “the airport’s SMS has major differences from the model for an SMS proposed by ICAO. The question is whether the safety management system is functioning at all levels at the airport and whether everyone who works at the airport feels the involvement and the responsibility that is expected to influence a workplace with an SMS”.

In respect of the deficient AIP content, it was noted that “the Investigation has not been able to explain the lack of holding position markings in the AIP. It has been found that neither the older holding position markings nor the more recent markings appeared in the AIP that was valid in the summer of 2011. Changes to the daytime markings at Y3 have probably not been communicated to those who are responsible for updating the AIP for Arlanda”. [see Editor's note below}

Three Safety Recommendations were issued as a result of the Investigation:

Editor's Note:: One of the possible reasons for absence of the RWY holding position coordinates in the AIP could be the gap in ICAO requirements for its provision/publication in the AIP.

Both Annexes 14 and 15 classify it as a critical element from the point of view of data quality requirements, however Annex 14 which requires the survey of this position to a half-meter accuracy fails to specify the need to report it to the AIS, and Annex 15 does not provide any placeholder for its publication in the AIP template. Only Annex 4 (Aeronautical Charts) requires the indication of the markings of the holding position and stopbars in the AD chart, which is insufficient (and not followed as per example) for today's automated systems.

These coordinates will be included in the future Airport Mapping Database (AMDB) applicable from 2015. However with AMDB being only a recommendation in SARPS, and having only the application to complex RWY/TWY structures, this issue will remain unsolved. (November 2012)