On 17 October 2014, two recently type-qualified Airbus A319 pilots responded in a disorganised way after a sudden malfunction soon after take-off from Zurich required one engine to be shutdown. The return to land was flown manually and visually at an excessive airspeed and rate of descent with idle thrust on the remaining engine all the way to a touchdown which occurred without a landing clearance. The Investigation concluded that the poor performance of the pilots had been founded on a lack of prior analysis of the situation, poor CRM and non-compliance with system management and operational requirements.

On 17 October 2014, an Airbus A319 (YU-APA) being operated by Air Serbia on a scheduled passenger flight from Zurich to Belgrade as ASL371 experienced a malfunction which affected the operability of the right engine soon after take-off in day VMC. Although no explicit declaration of emergency or urgency was made, ATC were advised that an immediate return to land was required and provided assistance which facilitated a subsequent landing on runway 28. There were no injuries to any of the 125 occupants, but the response of the pilots to the airworthiness problem encountered, including some erratic manoeuvring, the maintenance of excessive speed and an obviously unstable approach to a landing without clearance were considered grounds for investigating the operational safety of the flight.

An Investigation was carried out by the Swiss Transportation Safety Investigation Board (STSB). Data from the FDR and the 2 hour CVR were successfully downloaded and recorded ATC data relevant to the Investigation were also available.

It was noted that both pilots involved were Serbian citizens. The Captain, born in 1968, had 5,184 hours total flying experience which included 233 hours on type, all as commander. The First Officer, born in 1967, had 6,962 total flying hours which included 163 hours on type. Both pilots had received their A320 series type rating at the 'Air Berlin Training Organisation' earlier in the year. The First Officer was the PF for the investigated flight. It was noted that neither crew member was considered "inexperienced" on the aircraft type under Air Serbia procedures which required a minimum of either 100 flying hours and 10 sectors within a consolidation period of 120 consecutive days or 150 flying hours and 20 sectors without time limit to be removed from the "inexperienced" category. This status allowed them to be paired despite both having relatively low type experience.

It was established that one minute after becoming airborne from runway 32 at Zurich at less than the permitted maximum landing mass, and just after the flight had changed frequency to Departure and was passing 3,900 feet QNH, an ECAM Master Warning was annunciated to draw attention to a sudden loss of oil pressure in the right engine. Within a few seconds, and without consulting the PF, the Captain, asked ATC for an immediate return to Zurich and was released from the SID being flown as cleared and given an appropriate radar heading. He then followed up with "we have a problem with engine two and please priority landing” to which ATC responded with "expect vectors ILS runway two eight, I say again runway two eight, about twenty-five track miles" and an instruction to make a further turn to the right which was acknowledged.

The aircraft continued to climb beyond the SID initial climb clearance of 5,000 feet and passing 5,400 feet, the flaps and the slats were retracted. The spoilers, which had been armed for take-off, remained armed. The Captain then asked the PF "whether he should initiate the ECAM procedure applicable to the oil pressure warning" and the latter replied in the affirmative and added that "he would finish the climb". At this point, ATC had, by implementing radar heading, cancelled the SID but had not issued any cleared altitude, so it was not clear what altitude the PF was intending to stop at. As the ECAM drill was being carried out, ATC advised that the climb could be stopped "now, at 6,000 feet" but when there was no response and climb continued transmitted 10 seconds later to "stop climb at 7,000 feet". There was no crew read back but the aircraft did then stop at 7,000 feet and ATC asked if the crew were ready for positioning to the 28 ILS. The crew replied that they were but added that as they were visual with the runway "maybe we will prefer from this position visual approach for two eight.” With the aircraft level at 7,000 feet and about 7 nm north northeast of the runway 28 threshold at 238 KIAS, descent to 5,000 feet was given followed by a turn onto a south easterly heading - see the illustration below. 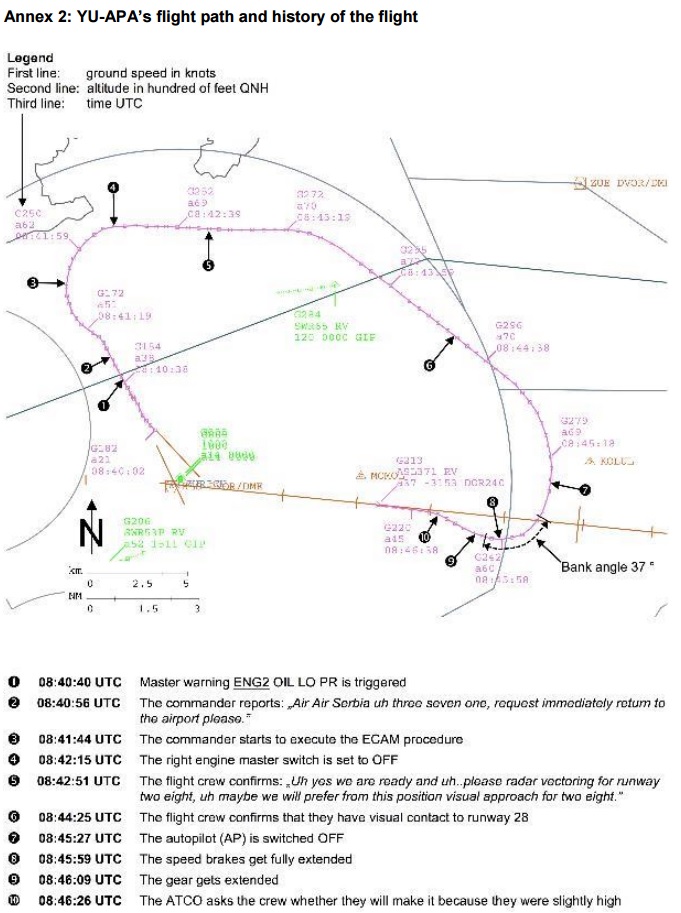 As this descent was commenced, the PF called for the After take-off/climb Checklist and after that, the Captain "mentioned an approach briefing and commented to the First Officer that from their position, it would be best to perform a visual approach to runway 28". The latter did not although "he later made a statement that, whenever possible, he personally favoured an instrument approach because this could be flown in a more precise and calmer way" whereas the Captain later stated that he had "purposely wanted to remain in VMC in order to be able to land from gliding flight at any time should the second engine also fail". He added that "he had not wanted to fly a holding pattern so that the wind-milling time of the shut down engine would be kept to a minimum because of the risk of fire".

Having checked that the crew were visual with runway 28, ATC gave a suitable heading towards a visual final and approved a visual approach. Despite the fact that no PAN or MAYDAY status had been declared, ATC continued to clear all other traffic from the vicinity and likely flight path of the A319. With the aircraft still at 7,000 feet and at 252 KIAS and the AP still engaged, the crew selected an altitude of 3,000 ft on the FCU. A "conversation akin to an approach briefing" followed with "the language switching between English and Serbian". It was confirmed that the Seat Belt signs was switched on and as the descent commenced, the AP was disengaged. The crew were aware of their continued high airspeed and that "they were a little high for the approach" and the use of the speed brakes was discussed. At this stage, "no information had been provided to either the cabin crew or the passengers".

During the concurrent right turn towards final, a 30° angle of bank was exceeded without any alert from the Captain but with no reduction in airspeed, the aircraft still flew through the extended centreline at 6,150 feet which put it "about 1,750 ft above the nominal ILS/PAPI glideslope of 3.3°" when just under 9 nm from the runway threshold. The bank angle reached 37° and soon afterwards, the aircraft, with the speed brakes now deployed (which had simultaneously led to the disarming of the still-armed ground spoilers) began to turn back towards the centreline. Airspeed remained high and the sink rate increased to a maximum of 2,880 fpm. The landing gear was selected down as the aircraft approached 5,000 feet still at high speed and still about 1,700 feet above the nominal 3.3° ILS glideslope.

After being assured by the crew that they could still make it straight in even though they were "a bit high”, the controller instructed the crew to change to the TWR frequency. This was acknowledged but no call to TWR was made until after landing. The PF advised that he would land with flaps '3' rather than 'Full' and autobrake 'LO' was selected. Flaps '2' were selected as the aircraft was approaching 2,500 feet QNH at 195 KIAS and descending at 1,320 fpm. When a radio altimeter height of 1,000 feet was passed soon afterwards, there was no SOP call. Flaps were finally deployed to '3' at 878 feet agl at 176 KIAS and a rate of descent of just over 1,000 fpm; the speed brakes remained out but when they were stowed a few seconds later following an aural alert that they were still out, the ground spoilers were not subsequently armed for the landing. The PF requested the landing and it was quickly completed just prior to the automatic callout of "500" which occurred with the aircraft still fast at 149 IAS and still descending at a little over 1,100 fpm and still above the ILS GS by enough to produce an almost full scale fly down command. The APU was started "shortly before the aircraft touched down". During the entire final approach to touchdown, it was found that the thrust of the functioning left engine "remained in approach idle".

Main gear touchdown occurred within the TDZ at 136 KIAS and manual braking was commenced. When the thrust reversers were deployed 7 seconds later at 114 KIAS, the ground spoilers automatically deployed. Following receipt of instructions to exit the runway on their first contact with TWR having landed without requesting or receiving a landing clearance, the First Officer "subsequently pointed out to the commander that the passengers had not been informed" and the Captain replied that "this did not matter". On reaching the designated parking position, the Captain requested the ‘After Landing Checklist’ and the passengers subsequently disembarked normally.

The cause of the low oil pressure was found to have been a leak in the right hand engine's Air Cooled Oil Cooler (ACOC). The cause of the leak was found to be "material fatigue of the cooling tubes, caused by movements as a result of broken soldering joints". A brazed joint in the cooler had failed and this "had allowed a crack to form and grow through cycling" thus creating the conditions for an oil leak to occur. It was noted with concern that "it was no longer possible to establish with certainty what sort of component the defective ACOC was". According to Airbus, all that could be said with certainty is that "it was not an Original Equipment Manufacturer (OEM) part" installed at airframe manufacture or otherwise. The documented component number and information provided by the former owner of the aircraft both indicated the same component Serial Number (S/N) for the defective component but there was evidence on the component that it had been a different S/N and the identifying label "for whatever reason, had come loose and got lost".

It was considered that the performance of the flight crew in response to what was a relatively straightforward technical fault had been substandard in a whole range of respects. Those identified included the following:

From an overall perspective, the Investigation was "convinced" that the limited aircraft type experience had "played a role" in the conduct of flight procedures, flight path selection and the response to the technical issue which initiated the need to return.

The Investigation formally determined that the Cause of the investigated Serious Incident was that "shortly after take-off, the flight crew, in an overhasty manner and without prior analysis of the situation, initiated a risky landing approach, after having switched off the right engine as a result of a leak in the air-cooled oil cooler".

Two Other Risk Factors which, although they did not influence the development and course of the Serious Incident, nevertheless still represented risk factors were identified as follows:

The Final Report was approved on 3 November 2016 and published on 14 November 2016. No Safety Recommendations were made.