On 8 February 2012, a TCAS RA occurred between an Airbus A330 and an Airbus A319 both under ATC control for landing on runway 25R at Barcelona as a result of an inappropriate plan to change the sequence. The opposite direction aircraft both followed their respective RAs and minimum separation was 1.4 nm horizontally and 400 feet vertically. The Investigation noted that the use of Spanish to communicate with one aircraft and English to communicate with the other had compromised situational awareness of the crew of the latter who had also not had visual contact with the other aircraft.

An Investigation was carried our by the Spanish investigation agency, CIAIAC. Late notification of the event meant that “there was no possibility of retrieving any of the information on the Flight Data Recorder (FDR) or Cockpit Voice Recorder (CVR) of either aircraft involved". QAR data from the A330 only was obtained. The tracks of the two aircraft were as shown on the diagram below in which the aircraft are identified by their callsigns (IBE is the A330 and BEL is the A319) and which also shows the No 1 aircraft, a Delta Airlines Boeing 777. The indicated aircraft positions on the diagram are those at the time the TCAS RAs were received by the two Airbus aircraft. 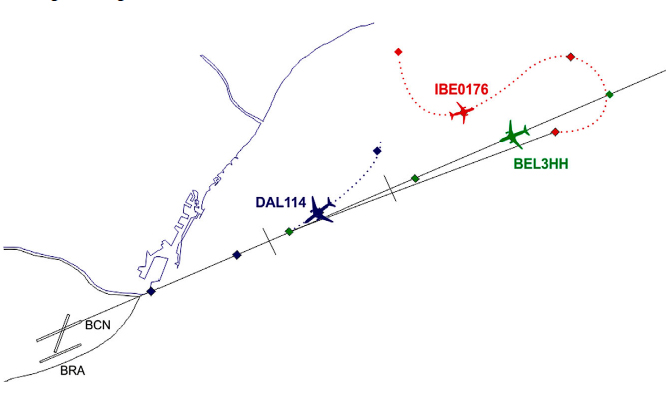 The Investigation established that the A330 had initially been cleared to position towards final approach from the north at 4000 feet Altimeter Pressure Settings and was flying at 210 knots with the AP engaged when the controller realised that it was not going to be possible to make the aircraft No 2 to land and instructed a left turn onto heading 060°. During this turn, with the A319 in sight and twenty seconds after being instructed by ATC to continue the turn onto 050°, a TCAS RA ‘Climb’ had been received as the aircraft was turning through 078° and was actioned. At that time, the A319 was on the ILS localiser and passing 4000 feet QNH in a descent to 2300 feet as cleared by ATC. A TCAS TA was received and the opposite traffic was seen on the TCAS display only showing 300 feet above. This was immediately followed by a short-duration TCAS RA requiring an increase in their rate of descent from 1000 fpm to 1500 fpm which was actioned and ATC advised. No subsequent comment or explanation for the RA was offered by ATC, although the Investigation noted that the other aircraft had received an explanation.

It was noted that Short Term Conflict Alert (STCA) was installed at the controller position involved in the incident but that “the STCA in the Barcelona TMA is normally inhibited below FL195 so as to reduce the number of nuisance warnings, meaning that on the day of the incident, the STCA was not operational in the space in which the TCAS warning took place”. It was further noted that “AENA has no general procedures on the use of the STCA system in terminal areas (TMA), though it reported that it is working to improve the predictability of the system so that it can be activated in these areas”. Despite this situation, the Investigation concluded that live STCA would not have helped as the controller was already aware of the conflict.

The Investigation was made aware of the outcome of the ATC internal investigation into the Incident which concluded that “once it was decided to take out the (A330) of the sequence and given the traffic heights, the proper course of action would have been to have (the A330) turn right to move it away from (the A319) and that it was advisable that training for terminal area controllers should highlight the need to assign proper courses for intercepting localisers on approach and to plan potential conflict situations ahead of time so that vertical separation is maintained at all times”. This internal Investigation “also stressed the importance of using the English language (on a frequency) when it is (being) spoken by any aircraft crew”.

The Investigation noted that the CIAIAC had raised the language issue as a result of an earlier investigation into an Incident at Madrid. It was noted that Spanish Air Traffic Regulations include the remarks that:

The Investigation was of the opinion that:

“This event is an example of improper use of language since the correct practice in those cases that involve several aircraft whose crews speak different languages is to use English so that everyone is aware of the situation. This does not appear to be a case of improper mastery of English, but rather of a bad practice that could result in safety deficiencies”.

The Investigation concluded that the Cause of the incident was “a miscalculation on the part of ATC when attempting to adjust flight paths. The resolution of the conflict was not adequate. Once it was decided to have (the A330) turn, this aircraft shouldn’t have been allowed to turn left without taking into account the altitudes of the aircraft or their possible converging flight paths. It would have been better handled by making (the A330) turn right. It was also considered that deficient ATC communications contributed to the Incident”.