On 29 May 2012, a British Airways Airbus A320 departing Zürich and in accordance with its SID in a climbing turn received and promptly and correctly actioned a TCAS RA 'CLIMB'. The conflict which caused this was with an AW 139 also departing Zürich IFR in accordance with a SID but, as this aircraft was only equipped with a TAS to TCAS 1 standard, the crew independently determined from their TA that they should descend and did so. The conflict, in Class 'C' airspace, was attributed to inappropriate clearance issue by the TWR controller and their inappropriate separation monitoring thereafter.

On 29 May 2012, an Airbus A320 (G-EUUD) being operated by British Airways on a scheduled passenger flight (BA713) from Zürich to London Heathrow and an [[A139|Augusta Westland AW 139] (HB-ZUV) being operated by Swiss Jet on a private training flight from Zürich to Les Eplatures came into conflict in Visual Meteorological Conditions (VMC) soon after both had made daylight departures from Zurich under Instrument Flight Rules (IFR) on different SIDs, the AW139 first. The A320 followed the consequent TCAS RA and the AW 139 manoeuvred appropriately in response to the TA which was annuciated on its TAS. As a result, there was no actual risk of collision.

An Investigation was carried out by the Swiss AIB (SAIB). ATC radar and R/T recordings and the TCAS Non Volatile Memory data from the A320 were used to assist the Investigation. It was noted that the conflict had occurred 4nm west south west of Zürich Airport whilst both aircraft were in Class 'C' airspace under the control of Zürich TWR. The TWR position involved was provided with a radar display which covered the area where the conflict developed and occurred but this was not used because of the prevailing good visibility, estimated as 30 km, and a 5500 foot cloudbase - above the altitude where the conflict arose.

It was noted that the AW139 was on an IFR training flight as part of the revalidation of an expired AW 139 single pilot rating previously held by a part time pilot for Swiss Jet. As such this pilot was occupying the right hand seat as he would do when operating single pilot and acting as PF and the other pilot was an Inspector from the Swiss Federal Office of Civil Aviation (FOCA) acting as Instructor. The AW 139 was cleared to take off from 'Heliport West', located to the south of runway 28, following a WIL 2Q SID which had an initial stop altitude of 5000 feet.

A little under 2 minutes later, the A320 was cleared to take off from runway 28 following a VEBIT 3W SID with the commander as PF. TWR advised the AW139 of the departure of the A320 and soon afterwards re-cleared the A320 to continue climb to FL120. The two aircraft initially followed parallel tracks, that of the AW139 being to the south of that being followed by the A320, but by the time the latter commenced the SID-prescribed left turn towards the more southerly tracking AW139, it had caught up with it. The AW 139 had also climbed more quickly and at a lower forward speed than the TWR controller had anticipated and both aircraft were at a similar altitude and climbing into potential conflict - see the diagram below. Just as the A320 crew had reduced their rate of climb slightly in order to accelerate sufficiently to retract flaps, a TCAS RA 'CLIMB' was annunciated. It was promptly followed with the rate of climb being increased to ensure it was within the required green zone of between 1500 and 2000 fpm. TWR were advised of the RA within 4 seconds of it beginning and it subsequently moderated to ADJUST VERTICAL SPEED. Initially, the left turn in progress at the time the RA began was continued but subsequently it was stopped and a climb straight ahead was continued. Meanwhile, the AW 139 had received a TAS TA and, with the A320 in sight, the crew had decided to descend from 5000 feet, their clearance limit, which they were just reaching. A descent to 4500 feet was made at approximately 1500 fpm. Twenty seconds after the A320 RA had begun, the two aircraft tracks crossed. It was established that the minimum separation achieved at this point was a vertical separation of 750 feet whilst 0.24 nm apart laterally. The prescribed separation in the airspace concerned was either 3nm horizontally or 1000 feet vertically so it was not met. 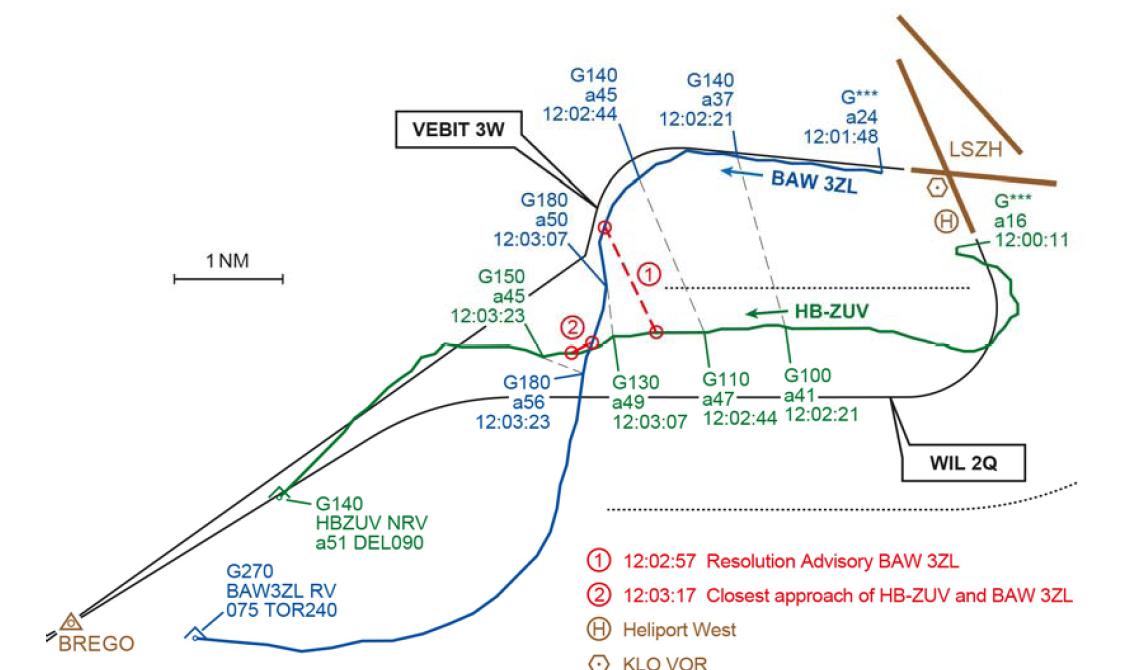 It was noted that the Short Term Conflict Alert (STCA) system installed at Zürich "because of its parameterisation, is not primarily designed for defusing conflicts which occur on arrival at and departure from airports". Nevertheless, the system did generate a visual Alert (see below) some 25 seconds prior to the potential conflict, just before the TCAS RA occurred, although since the TWR controller had been assessing the situation purely visually and had not consulted his radar display, it was not noticed. It was established that STCA at Zürich only produces audible alerts in the Departure Control Centre. 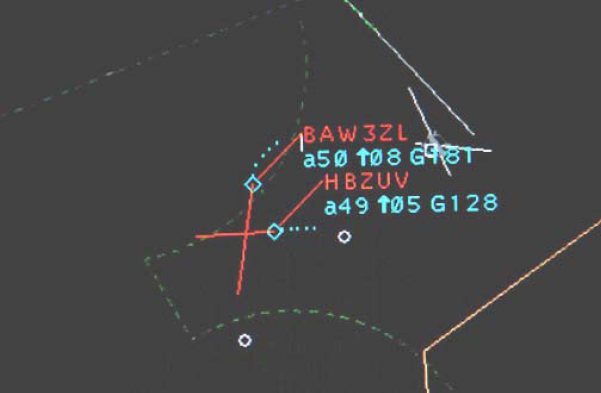 The Investigation found, as in other investigations involving ANSP Skyguide, that it was "common practice in aerodrome control to use the radar system only in restricted visibility" and that "traffic in the vicinity of the aerodrome is handled mainly according to sight". The Investigation considered that "the present case clearly indicates that the (TWR controller) involved allowed himself to be deceived by sensory perceptions and held an incorrect expectation". It was noted that "the illusions of sensory perceptions originate from the usual limitations of human performance" and that "just as in visual flight, where a pilot, despite good air traffic monitoring, should occasionally consult, for example, engine monitoring instruments, the altimeter or a navigation tool in the cockpit, for an air traffic control officer working visually, a radar system is also a tool which can provide information which cannot be acquired merely by looking outside." It was concluded that "the unilateral focus on sensory impressions and the failure to use technical aids which could have corrected the misperceptions, contributed to the occurrence of the dangerous convergence".

The TWR controller involved in the investigated event advised that, having issued traffic information to both aircraft, he had been convinced, based on visual observation, that the Airbus A320 would easily have climbed above the helicopter before the crossing of the two SID tracks. Even as the potential for a conflict developed, it was noted that "the relatively large A139 helicopter still seemed to him to be fairly close to the airport". In his statement to the Investigation, he said that "in his eight years of work he had only once given the SID WIL 2Q to an aircraft" and considered that "air traffic services in Zurich generally have poor experience with helicopters in IFR operation".

The Investigation also noted that the response to TCAS RAs which occur during a turn in respect of whether that turn should be continued or stopped was, at the time of the investigated event not explicitly covered by any of the corresponding "procedures, regulations or standards" and had not been covered in simulator training on TCAS RA response received by the pilots. However, the potential problem of some aircraft in some circumstances having insufficient thrust/power to achieve a rate of climb required to fly an RA whilst also turning was noted - although in the event under investigation, it was noted that "everything indicates that the rate of climb required by (the A320's) TCAS could have been achieved even if it was performing a turn".

The formal statement of the Cause of the conflict was that "the air traffic control officer underestimated the speed and climbing performance of a helicopter, which resulted in a dangerous convergence with a commercial aircraft which had taken off after the helicopter, involving a high risk of collision".

The following Contributory Factors were identified:

The Final Report was completed on 29 October 2014 and approved for publication by the Swiss AIB on 18 December 2014. The event was classified as an International Civil Aviation Organisation (ICAO) Category 'A' AIRPROX as well as an Annex 13 Serious Incident. No Safety Recommendations were made.