On 29 February 2020, an Airbus A320 inbound to Delhi lost separation against an outbound A320 from Delhi on a reciprocal track and the conflict was resolved by TCAS RA activation. The Investigation found that the inbound aircraft had correctly read back its descent clearance but then set a different selected altitude. Air Traffic Control had not reacted to the annunciated conflict alert and was unable to resolve it when the corresponding warning followed and it was noted that convective weather meant most aircraft were requesting deviations from their standard routes which was leading to abnormally complex workload.

On 29 February 2020, an Airbus A320 (VT-CCU) being operated by Air Asia (India) on a scheduled domestic passenger flight from Goa to Delhi as IAD778 and an Airbus A320 (VT-IAR) being operated by Indigo on a scheduled domestic passenger flight from Delhi to Chennai as IGO2124 came into close proximity in night IMC when on reciprocal tracks at less than the prescribed vertical separation whilst working the same radar control frequency. TCAS RA activation and compliance eliminated the collision risk and the minimum achieved separation was 0.5nm laterally and 600 feet vertically.

A Serious Incident Investigation was carried out by the Indian Aircraft Accidents Investigation Bureau (AAIB) by reference primarily to downloaded data from the Air Asia A320 CVR and FDR and recorded ATC radar data and communications with both aircraft.

It was established that shortly after the inbound Air Asia A320, on a generally south-westerly track, had been cleared to descend to FL120, the outbound Indigo A320, on a generally north-westerly track, had been cleared to climb to FL100. Both aircraft then requested right turns for weather avoidance and Air Asia was given a heading of 015° and Indigo direct to waypoint ‘AKRIB’. Air Asia was then cleared to descend to FL110 and Indigo were then given climb to FL110 to expedite and both aircraft correctly read back their clearances. After their turns for weather avoidance, the two aircraft were now on almost reciprocal tracks (see the radar snapshot below).

Having seen that Air Asia had actually descended to FL100 after receiving an audible STCA Warning, the controller immediately tried to resolve it by instructing it to climb (back) to FL110, following this with an instruction to Indigo to descend to FL095 and immediately changed this to FL090 before a response to the original descent instruction had been given. But by this time a coordinated TCAS RA had occurred and immediately after the controller had finished transmitting, Air Asia called “TCAS RA” and the controller responded with “call clear of conflict”.

After a short interval, Indigo called “clear of conflict” and advised climbing back to FL100 as previously cleared which was acknowledged. The controller, having not heard the same from Air Asia requested this and received confirmation before telling the flight it had only been cleared to FL110. The response was initially to dispute this and request details of the conflicting traffic which were given. Indigo then requested and was given further climb to FL110. 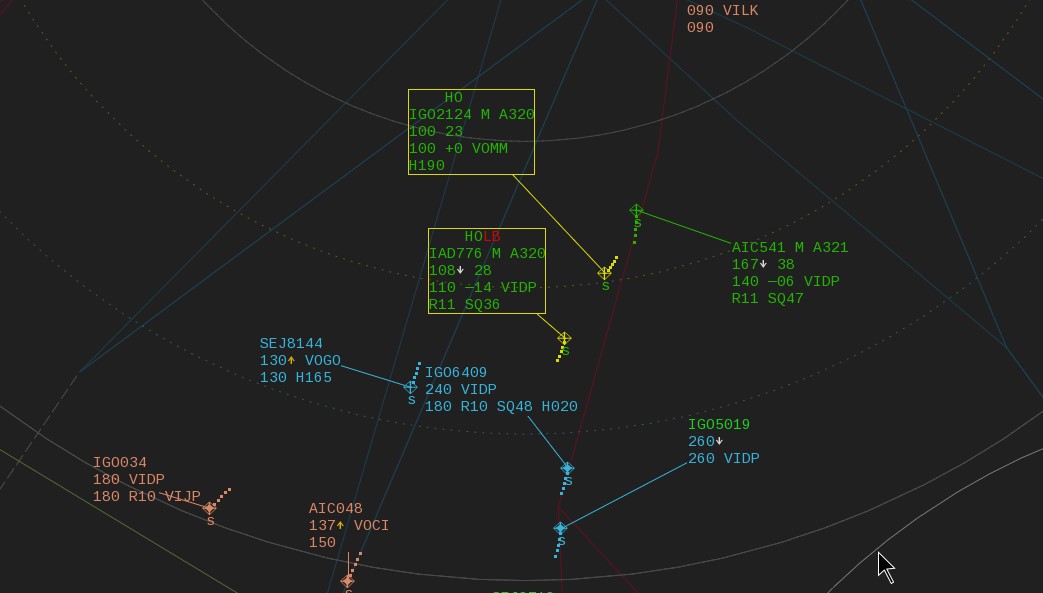 The conflict at the STCA Alert stage showing the two aircraft on almost reciprocal tracks. [Reproduced from the Official Report]

The Air Asia A320 PM read back their descent clearance to FL110 correctly but then set FL100 in the selected altitude window and the AP therefore took the aircraft into a level bust which given the near reciprocal track of the Indigo A320 which had climbed as cleared to FL100 resulted in a coordinated TCAS RA annunciation which both aircraft then followed. The radar controller was sufficiently busy with multiple requests for track variations due to adverse weather conditions to miss seeing the STCA initial alert activation and only attempted conflict resolution when the subsequent audible warning was activated by which time TCAS was about to resolve the problem and when it did so the RAs were correctly followed. Once the aircraft had passed, it seemed that the Air Asia crew had still not recognised their error so they challenged the controller about his assertion which the recorded communications confirmed had been read back as given but then set incorrectly.

The Probable Cause of the event was determined as “the unauthorised descent made by the Air Asia A320 below FL110 in violation of its ATC clearance”.

The Final Report was completed on 1 July 2020 and subsequently published.