On 15 March 2011 two Swiss International Airlines’ Airbus A320 aircraft were cleared for simultaneous take off on intersecting runways at Zurich by the same controller. As both approached the intersection at high speed, the Captain of one saw the other and immediately rejected take off from 130 knots, stopping just at the edge of the intersection shortly after the other aircraft had flown low overhead unaware of the conflict. The Investigation noted a long history of similar incidents at Zurich and concluded that systemic failure of risk management had not been addressed by the air traffic control agency involved.

On 15 March 2011 two Airbus A320-200 aircraft being operated by Swiss International Airlines on scheduled passenger flights from Zurich to Moscow Domodedovo and Madrid respectively came close to collision after beginning take off almost simultaneously on intersecting runways in normal day visibility, with the risk of conflict only resolved by a very high speed rejected take off made by one of the aircraft as the other flew just overhead its stopping position.

An Investigation was carried out by the Swiss AIB. ATC recordings, the DFDR downloads from both aircraft and the Cockpit Voice Recorder (CVR) recording from the rejected take off aircraft were available for use by the Investigation. The other CVR recording was overwritten during the subsequent flight.

It was found that both aircraft had been cleared for take off on, respectively, runway 16 and runway 28, by the same controller after he had forgotten about the first clearance he had issued. It was found that, after the two take offs had commenced within less than 10 seconds of each other, the Captain of the aircraft departing from runway 28 had caught sight of the aircraft departing 16 when his aircraft was approximately 550 metres away from the intersection of runways 16/28 after it had passed the buildings between the two runways which obscure the view of one from the other. At this point, the aircraft was within 5 knots of the applicable V1 speed of 135 KIAS and had immediately commenced a rejected take off, stopping just at the edge of runway 16 a few seconds after the other aircraft had passed overhead. An order to stop take off was found to have been given by the controller who had made the error after the crew had already initiated their rejected take off. 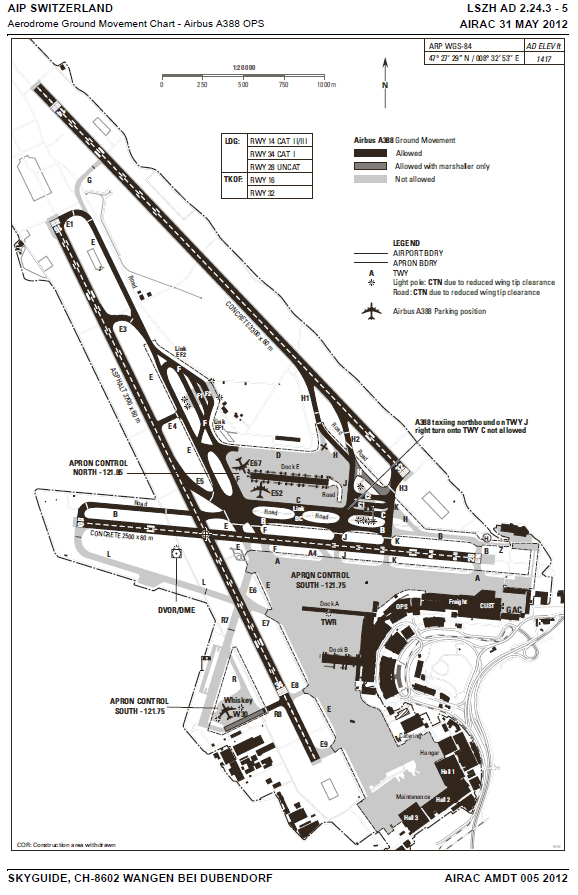 After considering the traffic load at the time of the incident, and noting the complication introduced by the presence of the light aircraft which had just taken off in order to conduct routine instrument approach procedure calibration work, the Investigation concluded that overall, the volume of traffic could be characterised as “high with slightly increased complexity”.

It was found that the same controller had been involved in a previous serious incident in respect of the same two intersecting runways on 31 July 2008 when he had cleared an aircraft to take off from runway 28 after previously clearing an aircraft to land on runway 16. As with the event currently being investigated, a rejected take off by the aircraft rolling on runway 28 resolved the conflict. Following this earlier event, neither a debriefing of the controller nor any other follow up in respect of his performance occurred. It was noted that at the time of the incident currently being investigated, the ANSP procedure after such an event “merely states that the supervisor decides whether the employee concerned can continue working without supervision immediately after the incident” and that “there are no other procedures to clarify whether retraining or other supportive measures are necessary”.

The Investigation found that, unlike a number of other European airports with comparable use of intersecting runways, Zurich procedures contained no detailed description of how to manage simultaneous use of runways 16 and 28 for departures. In particular, it was found that there were “no clear and unambiguous criteria according to which a take-off clearance may be given”.

It was noted that the surface movement radar system incorporated a Runway Incursion Monitoring and Collision Avoidance Sub-system (RIMCAS) but that when the alarm was activated as the two aircraft approached the intersection at speeds of 143 knots (the 16 aircraft) and 100 knots (the 28 aircraft) it had been activated “too late” to render any useful collision prevention function. It was, however, noted by the Investigation that the purpose of RIMCAS as installed at the time of the incident was primarily to provide warnings of potential collisions between vehicles and aircraft and was unsuited to resolving a conflict between two aircraft at high speed.

The fact that neither of the two aircraft involved had heard the take off clearance given to the other aircraft even though they were both being controlled on the same frequency was considered to be easily understood by recognising that both aircraft crews had been in a phase of high concentration approaching the point of their imminent take off and then commencing it in which “perception is focused on (ones) own call sign and a message with a different call sign can be blanked out”.

The Captain of the aircraft departing runway 28 stated that immediately before his aircraft had reached V1, he had caught sight of the other aircraft coming from the right on runway 16 and seen that it was already lifting off. He had begun to reject his take off immediately and he advised that neither he nor his First Officer had heard the subsequent call from ATC ordering a rejected take off. The Investigation considered that this was unsurprising given that the crew were already suddenly involved in the highly focused task of the reject from a very high speed and in any case, the engine noise at this point would have been high. It was concluded that the crew of the aircraft rejecting take off “had acted responsively and efficiently and carefully implemented the procedures laid down for such a case”.

The occurrence of previous similar Serious Incidents at Zurich which had been subject to Investigation was reviewed and it was found that since the year 2000, there had been a total of 12 comparable events on or in the immediate vicinity of the airport, in relation to which a total 19 Safety Recommendations had been issued. The Investigation reviewed these and the response by the ANSP to recommendations made and came to the conclusion that the circumstances of the incident under current investigation in the context of the previous history created the impression that “the previously implemented improvement in the operation of Zurich airport has been able to eliminate only selective risks” and that “the constant emergence of new problems suggests that the entire system of Zurich airport is currently being operated in a manner which involves further risks inherent in the system”.

The Investigation formally identified the Cause of the Serious Incident as:

It was additionally noted that “the genesis of the serious incident was favoured by the complex operation on two intersecting runways which is subject to a small error tolerance in the event of a high volume of traffic”.

Once the initial factual information had been gathered and reviewed, the Investigation had, on 17 May 2011, sent the Federal Office of Civil Aviation (FOCA) an Interim Report which contained the following seven Safety Recommendations issued at an early stage so that work on them could begin without delay:

The Final Report no. 2136 of the Swiss Accident Investigation Board (SAIB) was completed on 6 March 2012 and approved by the Swiss AIB on 2 May 2012. It noted the progress which has been made in respect of the 2011 Safety Recommendations, including the improvement of the RIMCAS installation so that it can now be configured differently for aircraft/aircraft and aircraft/vehicle conflict alerting. The assigned ICAO AIRPROX Risk Category (the actual risk after any avoiding action) of the event was assessed by the Investigation as ‘A’.