On 18 January 2012, ATC error resulted in two aircraft on procedural clearances in oceanic airspace crossing the same waypoint within an estimated 2 minutes of each other without the prescribed 1000 feet vertical separation when the prescribed minimum separation was 15 minutes unless that vertical separation existed. By the time ATC identified the loss of separation and sent a CPDLC message to the A340 to descend in order to restore separation, the crew advised that such action was already being taken. The Investigation identified various organisational deficiencies relating to the provision of procedural service by the ANSP concerned.

The area involved was within the Indian (IND) Sector of Airservices Australia’s West Procedural Airspace Group located at Melbourne. As there was no radar or Automatic Dependent Surveillance Broadcast (ADS-B) coverage in the sector, both aircraft were under procedural control, where planned separation depended on crew position reports and estimates or on automatic updating of position using ADS-C. Routine communication with aircraft utilised a combination of methods including HF and CPDLC. Aircraft positions were shown on an Air Situation Display (ASD) which was dependent on controllers receiving and inputting position reports and estimates. The prescribed separation in the airspace involved was 1000 feet vertically or 15 minutes laterally when transiting the same position.

It was established that some 13 minutes after receiving coordination from Jakarta ACC that the southbound A320 at FL350 would be overhead waypoint LAMOB, to the north of TANEM, the IND Controller issued a block level clearance to the A340 which was tracking northwest to operate between FL340 and FL360 and also advised that the primary method of communication would be changing from VHF to ADS-C and instructed the crew to monitor the Brisbane HF channel. The tracks of the two aircraft were self evidently going to cross at TANEM (see the chart extract below) with potentially conflicting altitude clearances although the A340 had not planned (and was not required to plan) TANEM as a waypoint just because their filed route overflew it.

Thirty minutes later, some eight minutes after the A320 estimate for LAMOB had passed, the same IND controller asked Brisbane HF to contact the aircraft. With the outcome of this request still pending, two minutes later, the controller began a handover of the position to enable a rest break. Both the A340 and the A320 were mentioned but neither controller noticed the potential conflict and the handover was completed in three minutes. At that time, the two aircraft were both tracking towards TANEM and three minutes later, the loss of separation occurred with the distance between the two aircraft closing with less than 1000 feet separation and less than 15 minutes apart. Ten minutes after that, the Brisbane HF operator received a delayed position report from the A320 that it had passed LAMOB three minutes after the earlier Jakarta ACC estimate and was estimating overhead TANEM in five minutes, two minutes after the likely time of the A340 over the same waypoint. At about this time, the first controller returned from his break to take over the position and during the handover, the imminent conflict due to lack of vertical separation was identified by the off-going controller who immediately initiated a data link (ADS-C) message to the A340 to descend to FL340 and the applicable 1000 feet separation was re-established one minute later, some 13 minutes after it had been lost.

However, it was found that the rapid restoration of separation was not the result of the ATC instruction but of proactive descent by the A340 crew who subsequently reported having observed the potential conflict with the opposite direction A320 on their TCAS display prior to the activation of any Advisory and were already descending from FL345 to FL340 when the ADS-C message was received.

The first controller had low experience of the task to which he was assigned to the extent that, when he had initially qualified ab-initio from en route basic training, it had been decided that he should work on an over-land radar control sector before moving to the procedurally controlled sectors of the West Procedural Group. The second controller was experienced on task and an OJTI. The Short Term Conflict Alert (STCA) system was not available on the IND Sector since it required that conflicting aircraft be under either radar or ADS-B surveillance. 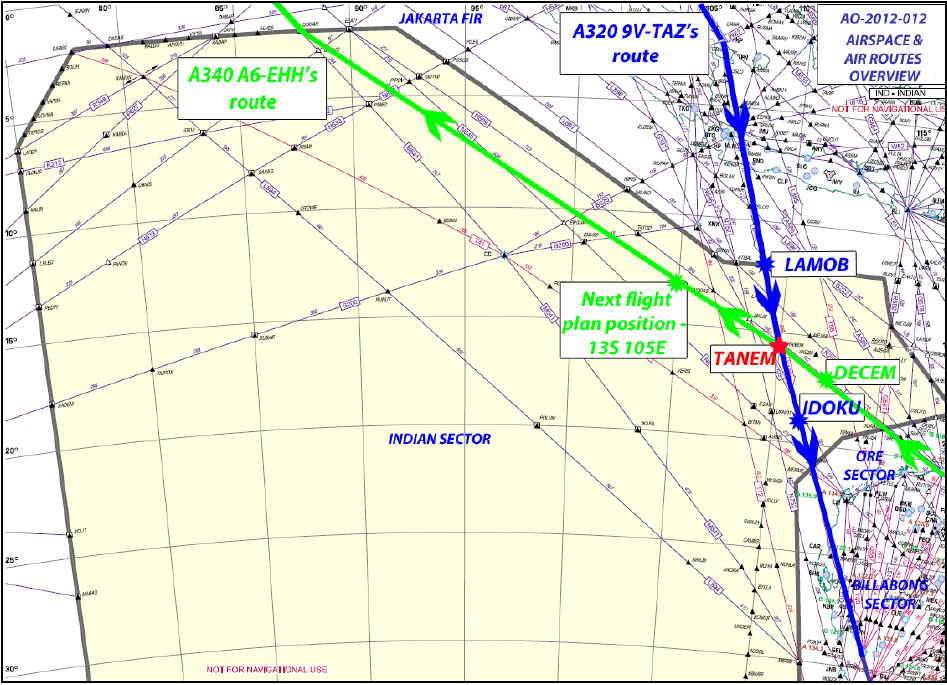 The Investigation noted that despite the lack of separation the actual potential for collision in this case was limited because the aircraft were on crossing tracks and the A340 crew had elected to fly at an altitude 500 ft lower than the A320. However, following an in depth review of the circumstances which led to the incident, the Investigation “identified several ATM factors that can lead to such traffic conflictions not being detected and effectively managed”. It was noted that in respect of the delayed HF position report, Tiger Airways had advised the Investigation that “often flight crews were not provided with an HF frequency before VHF communications were lost”.

It was concluded that the conflict had arisen because of four Contributory Factors, two of which were identified as Safety Issues requiring resolution:

It was also found that there were two other factors that had increased the risk which had been created, both of which were identified as Safety Issues requiring resolution:

Safety Action taken during the Investigation was notified to the ATSB by both Airservices Australia and Tiger Airways. Airservices Australia reported having made changes to its FRMS to effect improved work scheduling by introducing “a new rostering tool to limit cumulative fatigue and further mitigate fatigue related risk”. This tool had embedded in it a “Fatigue Assessment and Control Tool (FACT)” - a decision support tool to assist managers and supervisors in the effective management of changes to work schedules through means, including the identification of the most suitable individual for a roster variation, the assessment of situational factors that may affect potential fatigue related risk and the identification of risk controls to mitigate potential fatigue related risk.” Tiger Airways reported reminding their crews of actions that could be taken in the event of a loss of communications with ATC and the need to report all loss of communications events to the operator so that acceptable mitigation procedures could be ensure that “normalisation of non-normal events” did not occur.

Because of the unacceptable response to two of the identified Safety Issues, two corresponding Safety Recommendations were issued as follows: