On 18 September 2017, a departing Airbus A320 was instructed to line up and wait at Yangon but not given takeoff clearance until an ATR72 was less than a minute from touchdown and the prevailing runway traffic separation standard was consequently breached. The Investigation found that the TWR controller had been a temporarily unsupervised trainee who, despite good daylight visibility, had instructed the A320 to line up and wait and then forgotten about it. When the A320 crew, aware of the approaching ATR72, reminded her, she “did not know what to do” and the trainee APP controller had to intervene.

On 18 September 2017, an Airbus A320 (HS-TXB) being operated by Thai Smile on a scheduled international passenger flight from Yangon to Bangkok as THD302 was on runway 21 awaiting take-off clearance in day VMC when it was instructed to line up and wait behind an ATR72-600 (XY-AJP) being operated by Mann Yadanarpone Airlines on a scheduled domestic passenger flight from Sittwe to Yangon as MYP417A which was on final approach. An APP controller had to intervene when the TWR controller did not respond to reminders from the A320 crew that they were already on the runway and the A320 was just airborne and still over the runway when the ATR 72 landed.

After a delay of 11 days in the reporting of the incident to the Myanmar Aircraft Accident Investigation Bureau (AAIB) by ATC, an Investigation was commenced. The ATR 72 flight crew stated that they had been unaware that an incident subject to investigation had occurred and had therefore not reported it to the AAIB. Radar and communication channel recordings covering the event were available to the Investigation and it was noted that the prevailing weather conditions had been good and had not been a factor in what happened.

It was established that at the time of the event, a trainee controller was in position as the “duty air traffic controller”. She had joined the Air Traffic Department three months earlier and her duties on the day included a one hour period in the TWR position supervised by the Watch Controller. At the time of the event, the trainee described the traffic as “light” - the two aircraft involved were the only ones she was controlling. The APP position was next to the TWR position and at the time was also occupied by a trainee controller who, having joined the Air Traffic Department 6 days earlier, was being supervised by the Controller-in-Charge. Times during which traffic was light were specifically selected for trainee controllers to gain experience in position.

The 3,413 metre-long runway 21 was in use and the A320 had been instructed to line up and wait. The trainee tower controller was using a headset and the Watch Controller, who was not listening in, was unaware of this exchange. After noting that there was another aircraft (the ATR72) on the ILS approach to runway 21 with about 7 miles to go, she “went to the coffee bar to make coffee” and had not returned by the time the conflict occurred.

One minute after receiving a correct read back from the A320, the trainee tower controller instructed the ATR72 to report at 4 DME from touchdown. When no takeoff clearance followed, the A320 called “standing by for takeoff clearance” and received the response from the trainee controller “behind landing aircraft on final, line up runway 21”. The A320 immediately replied “we already line up runway 21” but despite repeating the call after there was no response to it, there was no response to the second call either. After 30 seconds had elapsed, the trainee approach controller intervened to give a takeoff clearance to the A320 and instruct the ATR72 to “continue”. The account of the event provided does not clarify when (or whether) the ATR 72 was given a landing clearance.

Examination of the radar recording confirmed that the ATR72 had crossed the runway 21 threshold on its final approach before the A320 was clear of the same runway which was “contrary to the control of arriving aircraft as per Clause 7.10 of ICAO Doc 4444 as well as (the) control of arriving aircraft as per the Myanmar MATS”. It was concluded that the minimum separation between the two aircraft was 1.2 nm laterally and 50 feet vertically. 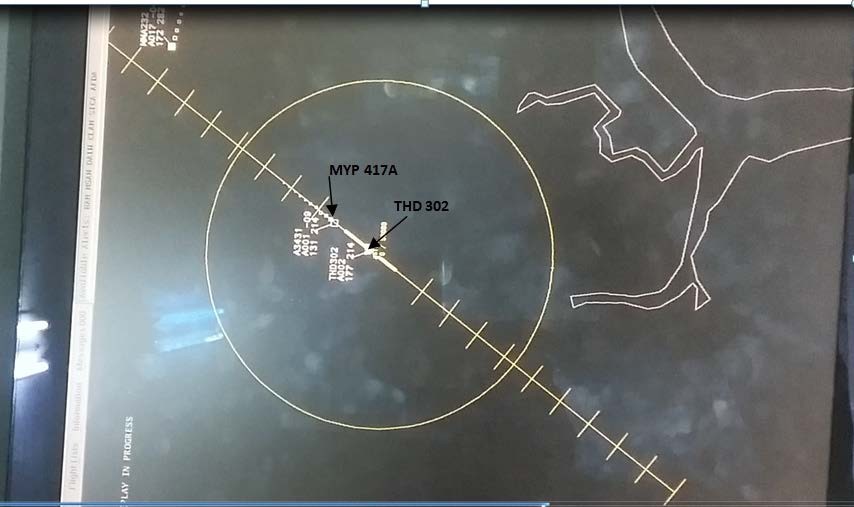 The recorded radar picture close to minimum separation (both aircraft were subsequently over or on the runway simultaneously). [Reproduced from the Official Report]

The trainee tower controller subsequently stated that she had forgotten that she had already instructed the A320 to line up and wait and when reminded by its crew that they were waiting for takeoff clearance, “she did not know what to do”.

In respect of the separation of landing aircraft and preceding landing and departing aircraft using the same runway, it was noted that ATS procedures in respect of runway occupancy state that “a landing aircraft will not normally be permitted to cross the runway threshold on its final approach until the preceding departing aircraft has crossed the end of the runway-in-use”. It was also noted that in the case of a runway which is observed to be obstructed after a takeoff or landing clearance to it has been given, the “appropriate action” is to:

Safety Action taken by the Air Traffic Department during the course of the Investigation was noted to have included the comprehensive retraining of all three controllers on duty in the TWR at the time of the event in respect of all the procedures relevant to their roles, their responsibilities when in position and the requirements of the Safety Management System. The latter included both ATS Safety Occurrence Reporting as specified in Appendix B of the SMS Manual and overview of ICAO Doc 9859.

Two Safety Recommendations were made as a result of this Investigation as follows:

The Final Report of the Investigation was released on 6 June 2018.