On 4 June 2016, a Boeing 737-800 instructed to climb from FL340 to FL380 by the controller of one sector in Bulgarian upper airspace came into sufficiently close proximity to an Airbus A320 under the control of a different sector controller to trigger co-ordinated TCAS RAs. Separation was eventually restored after the 737 followed its RA despite the A320, which had already deviated from its clearance on the basis of a prior TCAS TA without informing ATC, ignoring their RA. The Investigation found that the root cause of the conflict had been inadequate coordination between two vertically separated ATC sectors.

On 4 June 2016, an Airbus A320 (TC-ATK) being operated by Atlasjet on a scheduled international passenger flight from Dusseldorf to Istanbul under callsign KKK5LP and cleared to maintain FL370 lost prescribed separation in day VMC against a Boeing 737-800 (TC-JGF) being operated by Turkish Airlines on an international passenger flight from Istanbul to Rome Fiumicino under callsign THY7FX whilst both aircraft were on crossing tracks and the 737 was climbing from FL340 to FL380. Both aircraft received TCAS RAs but only the 737 followed it, the A320 having already begun to deviate from its clearance on receiving a prior TA. The (lateral) Closest Point of Approach (CPA) of 2.75 nm and 575 feet vertically occurred after the RAs had ceased.

It was established that the airspace where the conflict occurred was close to the FL365/FL370 boundary between two vertically separated air traffic control sectors. The Boeing 737-800 was working the lower of these, the SCU sector, and was on an approximately north westerly track at FL340 but expecting a clearance to climb to FL380 (see the illustration below). The Airbus A320 was working the higher of these, the SCL sector, and on an almost reciprocal, approximately south easterly track level at FL370 such that the two ground tracks were going to cross. The 737 was then instructed to climb from FL340 to FL380 by the SCU sector controller without fully recognising the potential for flight path conflict with the A320 still level at FL 370. The 737 then crossed that level climbing at 600 fpm, although still 14 nm from the approaching A320, and their respective tracks began to slowly diverge.

In response to an Short Term Conflict Alert (STCA) warning annunciated at both sector positions, the SCU controller instructed the A320 to turn 60° left to which there was no response. Instead, having simultaneously received a TCAS TA on the 737, its crew responded by disconnecting the AP and beginning a slow climb above FL 370 without informing ATC, the latter action being clearly contrary to the universal operating procedures for TCAS II. The SCL controller then instructed the 737 to turn 40° left a few seconds before the A320 received a TCAS ‘LEVEL OFF’ RA which was ignored as the climb continued at an increasing rate. No ATC notification that a TCAS RA had been received was given to ATC. 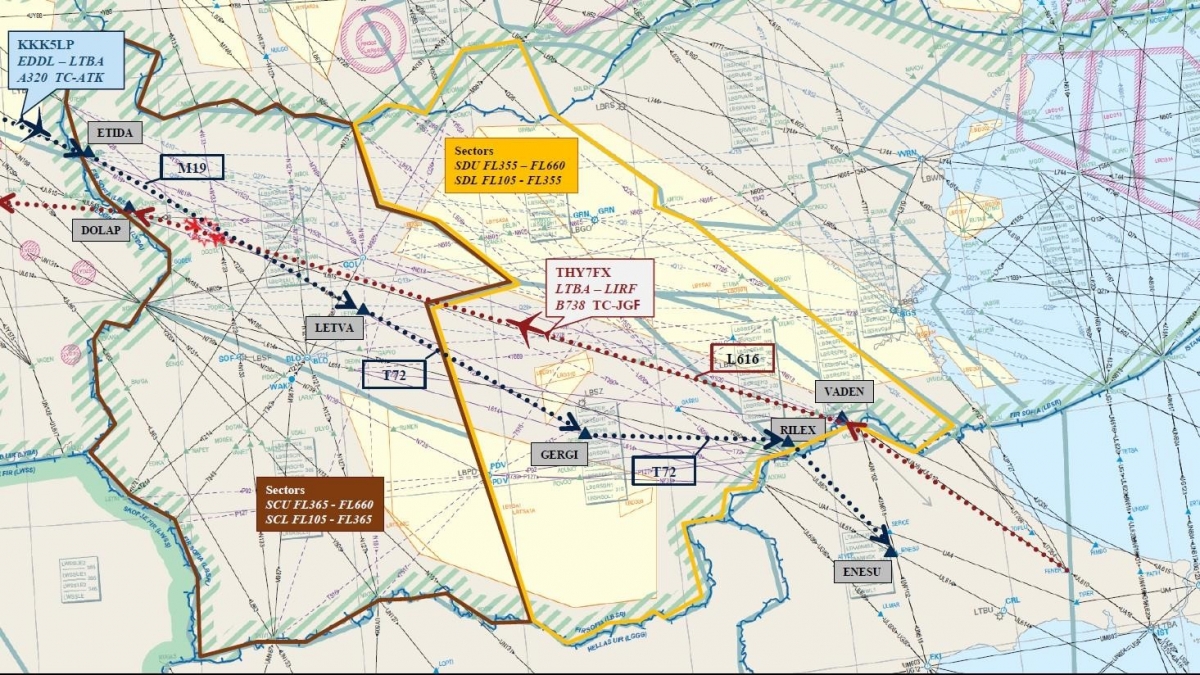 The conflicting ground tracks of the two opposite direction aircraft. [Reproduced from the Official Report]

Three seconds later with the two aircraft approximately 8nm apart, the 737 received a ‘CLIMB’ RA to achieve 1500 fpm or more and promptly responded, advising ATC accordingly. The SCU controller repeated his previous left turn instruction despite the notification of an RA. However, in responding correctly to the RA, the 737 climb rate began to exceed the A320 climb rate and soon afterwards, with vertical separation slowly increasing whilst lateral separation reduced, both aircraft received successive ‘Clear of Conflict’ annunciations, the 737 after a 10 second RA and the A320 after a 15 second RA. Both aircraft then continued climbing until around the time the lateral CPA occurred, by which time the 737 had reached its cleared level and the A320 had ceased its climb at FL 374. A re-creation of the relative flight paths of the two aircraft is provided below.

It was noted that the relevant part of the radar surveillance system was configured so that filters for the lower (SCL) sector provided for display of traffic up to FL380 and that filters for the upper (SCU) sector provided for display of traffic from FL350. Both MTCD and STCA alerting was installed and functioning for the two control sectors involved. In the absence of any evidence of equipment malfunctions in respect of either of the aircraft or at the ACC, it was concluded that the origin of the loss of separation lay in “inefficient implementation of applicable procedures by the controllers involved”. This was found to relate primarily to poor inter-sector coordination including the confirmation of the requested climb of the 737 into the SCU sector being confirmed by the SCU Planning Controller instead of the SCU Executive Controller. However, the Investigation also noted that the action to begin climbing above the cleared level by the A320 crew and the same crew’s failure to follow their subsequent TCAS RA or notify TC of its receipt were evidence of poor crew performance. The Investigation considered that the actions of the A320 pilots “were probably due to inadequate interaction and/or due to gaps in their training in the event of abnormal or emergency situations in flight”. 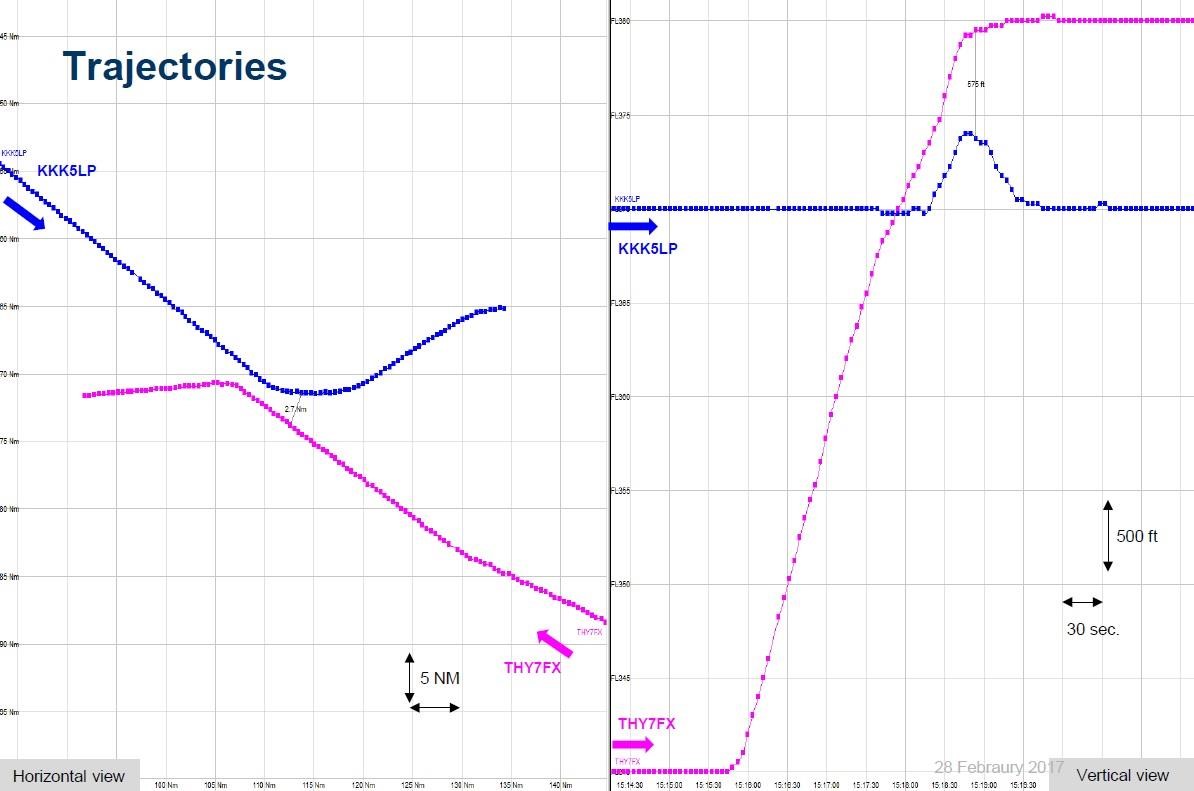 The horizontal and vertical recreations of the relative flight paths of the two aircraft. [Reproduced from the Official Report]

The Main Cause of the conflict was found to be the "incorrect assessment of the air situation and the issuing by the SCL sector ATCO of permission to change the flight path of the 737 without carrying out relevant coordination with the SCU sector ATCO and the unauthorised initiation of a climb by the crew of the A320 and their lack of any response to the TCAS RA they received”.

A Contributory Factor was identified as “the inefficient performance of coordination procedures between the SCL and SCU sector ATCOs at Sofia ACC during work in vertically separated sectors which were subject to the unit MATS Part 2”.

Seven Safety Recommendations were made as a result of the Investigation as follows:

The Final Report was completed on 9 September 2017 and subsequently published. An Appendix to the Report contains a summary of a TCAS Analysis of the event carried out by EUROCONTROL in support of the Investigation.