On 6 July 2018, a Boeing 737-800 being positioned to join the intermediate approach sequence in the Barcelona CTR was obliged to take lateral avoiding action against an Airbus A320 ahead. The Investigation found that although both aircraft were in the same sector at the time, the controller had overlooked the presence of the A320 which had been transferred to the next sector before entering it prior to the controller involved routinely taking over the position. An on-screen alert to the developing conflict had not been seen by the controller. Minimum separation was 1.1nm laterally and 200 feet vertically.

On 6 July 2018, an Airbus A320 (EC-HQL) being operated by Vueling Airlines on an international passenger flight from Rome Fiumicino to Barcelona as VLG61WG and a Boeing 737-800 (CR-RNU) being operated by Royal Air Maroc on an international passenger flight from Casablanca to Barcelona as RAM964Y came into close proximity in day VMC whilst being positioned to final approach at destination, closing to 1.1nm laterally and 200 feet vertically after the 737 crew sighted the A320.

A Serious Incident Investigation was carried out by the Spanish Commission for the Investigation of Accidents and Incidents (CIAIAC). It relied on recorded ATC data which were considered adequate without also seeking aircraft flight data.

It was found that new RNAV arrival procedures covering all 07L/R approaches had been in effect for just over two months at the time of the investigated event. It was established that both aircraft were being positioned onto the same RNAV Transition for an approach to runway 07L, the A320 coming from the ‘VIBIM’ holding pattern and cleared direct to waypoint BL542 and the 737 coming from the ‘RUBOT’ holding pattern and cleared intially to waypoint BL 546 (see the illustration below). Both aircraft were at this stage in contact with the controller of Barcelona sector T3E with the A320 cleared to descend to 4000 feet QNH and the 737 to 5000 feet. The 737’s ground speed was 30 knots greater than that of the A320 which was 220 knots. With the A320 still some way from BL542, it was cleared to continue to 3000 feet QNH and although still in the T3E sector was transferred to the Final (F07) Controller. The controller in the T3E position the handed over the position to a colleague who he briefed on all traffic currently on the frequency. The workload at the time of the changeover was not high - the oncoming controller subsequently described the traffic situation as “simple” - but the handover briefing did not mention the A320 still proceeding to BL546 and still in the sector (and visible on radar) but no longer on the sector frequency. With the 737 passing 6,900 feet QNH and with a groundspeed now 50 knots greater than the A320, which was passing 6,100 feet, the new T3E controller then re-cleared the 737 to descend to 4000 feet. As the 737 (and the A320) passed 5000 feet, the 737 was re-cleared to waypoint BL542 (which the A320 had still not reached). 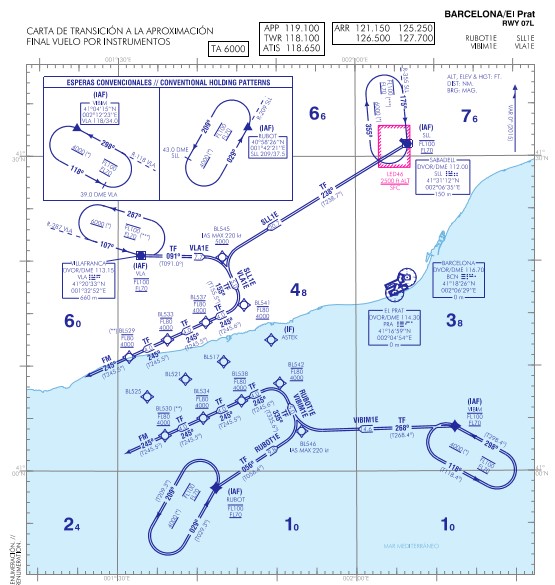 The AIP chart showing RNAV transitions to 07L approaches at Barcelona. [Reproduced from the Official Report]

Almost immediately, the 737 crew saw an aircraft in front of them and called the T3E controller to report “traffic 2nm ahead” and their intention to turn left. The controller responded by apologising - according to the 737 crew doing so “several times”. As the 737 began to turn left, it passed 1.2 nm east of the A320 with 100 feet vertical separation. The 737 crew subsequently stated that having seen the Vueling A320 descending from above and travelling in the same direction within 1.5 nm, they waited until the vertical separation had reduced to approximately 500 feet and then “decided to turn left to avoid potential wake turbulence” and immediately informed ATC.

The Investigation noted the view of both controllers involved in the handover of the executive controller position for the T3E sector that the briefing given and received had been “in their opinion, conducted correctly and that all of the necessary information was relayed to the oncoming controller”. Accordingly, the OM of the ANSP (ENAIRE) unit at Barcelona was reviewed with the following findings:

The OM required that the oncoming controller should be made aware of the general situation in the sector, with particular emphasis on those aircraft that are or could be in conflict, whether or not they are on frequency. In an approach sequence or pre-sequence (as in this incident), the first traffic in the sequence is transferred to the next sector when it is ‘clear of conflicts’ i.e. when this traffic has no other aircraft ahead of it and will not pose a conflict to the other traffic remaining in the sector and on the frequency. However, it was observed that such action “does not necessarily entail establishing that the next traffic in the sequence is ‘clear of conflicts’, since the position of the traffic ahead could affect it”. Therefore, since the traffic ahead still in the sector, even if transferred to another frequency, could represent a conflict risk for the following traffic, information about it should be included in a summary of the general traffic situation given during a position handover.

However, it was considered that since the traffic situation whilst the investigated conflict was accepted to have been ‘simple’, “neither the operational situation at the time of the handover, nor the fact that no mention was made during this handover of the presence of traffic that was still in the sector but no longer on the frequency, justified the oncoming controller’s failure to notice that this traffic could be of concern”.

It was considered that the controller’s lack of awareness of the presence of the A320 in his sector might have been attributable to either cognitive bias by giving attentional preference to sector traffic on frequency rather than not on frequency which are coloured differently on screen or to a channelled focus on communications with two other aircraft in the VIBIM holding pattern at the same time as the 737 was closing on the A320.

The Cause of the loss of separation formally documented as "the controller being unaware of all the traffic in his area of responsibility (sector LEBLT3E) that were of concern even if they were no longer on his frequency”.

The Final Report of the Investigation was approved on 30 October 2018. In view of corrective Safety Action taken by the ANSP since the event, it was concluded that it was not necessary to issue any Safety Recommendations.