On 8 April 2015, an Airbus A320 crew lost their previously-acquired and required visual reference for the intended landing runway at Brasilia but continued descent in heavy rain and delayed beginning a go around until the aircraft was only 40 feet above the runway threshold but had not reached it. A premature touchdown prior to the runway then occurred and the aircraft travelled over 30 metres on the ground before becoming airborne again. The Investigation was unable to establish any explanation for the failure to begin a go around once sufficient visual reference was no longer available.

On 8 April 2015 an Airbus A320 (PR-MHV) being operated by TAM on a scheduled domestic passenger flight from Recife to Brasilia struck the ground short of the destination runway landing threshold after commencing a daylight go around in IMC when the previously-acquired visual reference with the runway obtained at MDA was lost in heavy rain. The contact was transient and the subsequent climb away and subsequent approach were without further event. The 160 occupants were uninjured but the aircraft sustained main gear tyre and some minor fuselage damage and impact damage was caused to the runway threshold lighting.

The occurrence was not promptly reported and its significance was “only recognised” by TAM two days later when a crew report was received prompting a review of the corresponding QAR data and in turn notification of the circumstances to the CENIPA, the Brazilian Aeronautical Accidents Investigation and Prevention Centre who classified it as a Serious Incident and began an Investigation. As a result of the delay in notification, the only relevant recorded flight data available was that on the QAR, relevant FDR and CVR data having been overwritten.

It was established that during the non-precision RNAV (GNSS) ‘Y’ approach to the 3200 metre-long, 45 metre-wide runway 29R, the reported visibility at the airport was 3000 metres with a 3000 foot cloud base and some towering cumulus above. Recorded flight data showed a considerable variation in detected wind velocity during the final stages of the approach although the surface wind reported a few minutes earlier had constituted a small tailwind component. Satellite data showed that at the time of the occurrence, there had been significant convective weather in the region in which the airport was situated but not in the vicinity of the airport itself. As shown in the illustration below, the clearance from terrain beneath the extended runway centreline prior to the threshold was an uphill slope.

QAR data showed that the AP had been disconnected as the aircraft descended through the applicable MDA of 400 feet above the 3477 feet amsl threshold elevation at a time when the crew reported having had the runway in sight. The rate of descent had then been gradually increased to regain the procedure vertical profile from above but this had not been reduced when the profile was reached after light rain had started, and it continued increasingly below the profile for 7 seconds, by which time the rain had become heavy and sight of the runway had been completely lost at an undetermined point, without immediate commencement of a go around.

A go around was eventually initiated at 60 feet agl which, given the rising terrain, was equivalent to only 41 feet above the runway threshold when still some distance from it. Flight parameters recorded at the beginning of the go around included a 600 fpm rate of descent, engine thrust at 61% and a pitch up to 6.3°. As thrust increased and the descent continued at a reduced rate, the right main landing gear initially touched down 13.3 metres before the runway threshold and the aircraft then continued for 31.5 metres “with the landing gear on the ground” striking a runway threshold light before becoming airborne again and completing the rest of the go around and repositioning to a second approach to the same runway without further event. 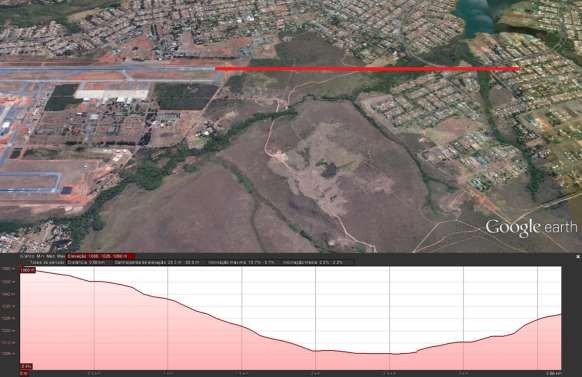 The terrain along the extended centreline prior to the runway threshold. [Reproduced from the Official Report]

Actual or potential Contributory Factors were identified as follows:

The Final Report was completed on 19 December 2018 and published online in both Portuguese and English language versions on 15 January 2019.