On 23 October 2020, an Airbus A320 taking off from Brisbane became difficult to keep on the centreline as speed increased and takeoff was rejected from a low speed. It remained on the runway and messages indicating a malfunctioning right engine were then seen. The Investigation found that one engine had surged as thrust was applied due to damage caused by a screwdriver tip inadvertently left in the engine during routine maintenance and that the pilot flying had used the rudder when attempting to maintain directional control during the reject despite its known ineffectiveness for this purpose at low speeds.

On 23 October 2020, a V2500-powered Airbus A320 (VH-VFF) being operated by Jetstar Airways on a scheduled domestic passenger flight from Brisbane to Cairns in normal day visibility made a low speed rejected takeoff when directional control became difficult as the aircraft accelerated and alerts advising a malfunction of the right engine subsequently appeared. Observers and some of the passengers subsequently reported having seen flames emitted from the right engine as the takeoff roll commenced.

An Investigation into the accident was carried out by the Australian Transport Safety Bureau (ATSB). Relevant data from the aircraft DAR (Digital Aircraft Condition Monitoring System Recorder) was available in support of the Investigation. Flight crew details were not recorded.

After completion of the push back, the First Officer, designated as PF for the flight, taxied the aircraft for a runway 01L departure. In anticipation of a rolling takeoff on reaching the runway, the Before Takeoff Checks were completed whilst taxiing and having been cleared for takeoff shortly before entering the runway, a rolling takeoff was commenced with Flex thrust set.

Both pilots subsequently stated that as both engines spooled up, a vibration and “popping” noise which rapidly increased in both frequency and volume was heard and the aircraft simultaneously began to diverge to the right of the runway centreline despite the First Officer applying full left rudder. The Captain responded by immediately selecting reverse thrust and brought the aircraft to a stop with the maximum ground speed reached being only 30 knots.

Once the thrust levers were at idle, the vibration subsided and the popping stopped and two ECAM messages for the No 2 (right) engine were annunciated - ‘STALL’ and ‘EGT LIMIT EXCEEDANCE’. The captain made a PA for “cabin crew to stations” and the SCCM responded that some passengers had seen flames coming from the right engine. Both the TWR controller and the flight crew of a following aircraft also reported having seen flames coming from the rear of the right engine for a short time. After the RFFS had attended and found no evidence of anything abnormal, the aircraft was taxied back to the gate where both engines were shut down.

Immediately after the passengers had disembarked, the attending engineers reported finding “small balls of metallic debris” in the tailpipe of the right engine (see the illustration below) and a review of recorded flight data indicated the right engine had surged when takeoff thrust was applied. 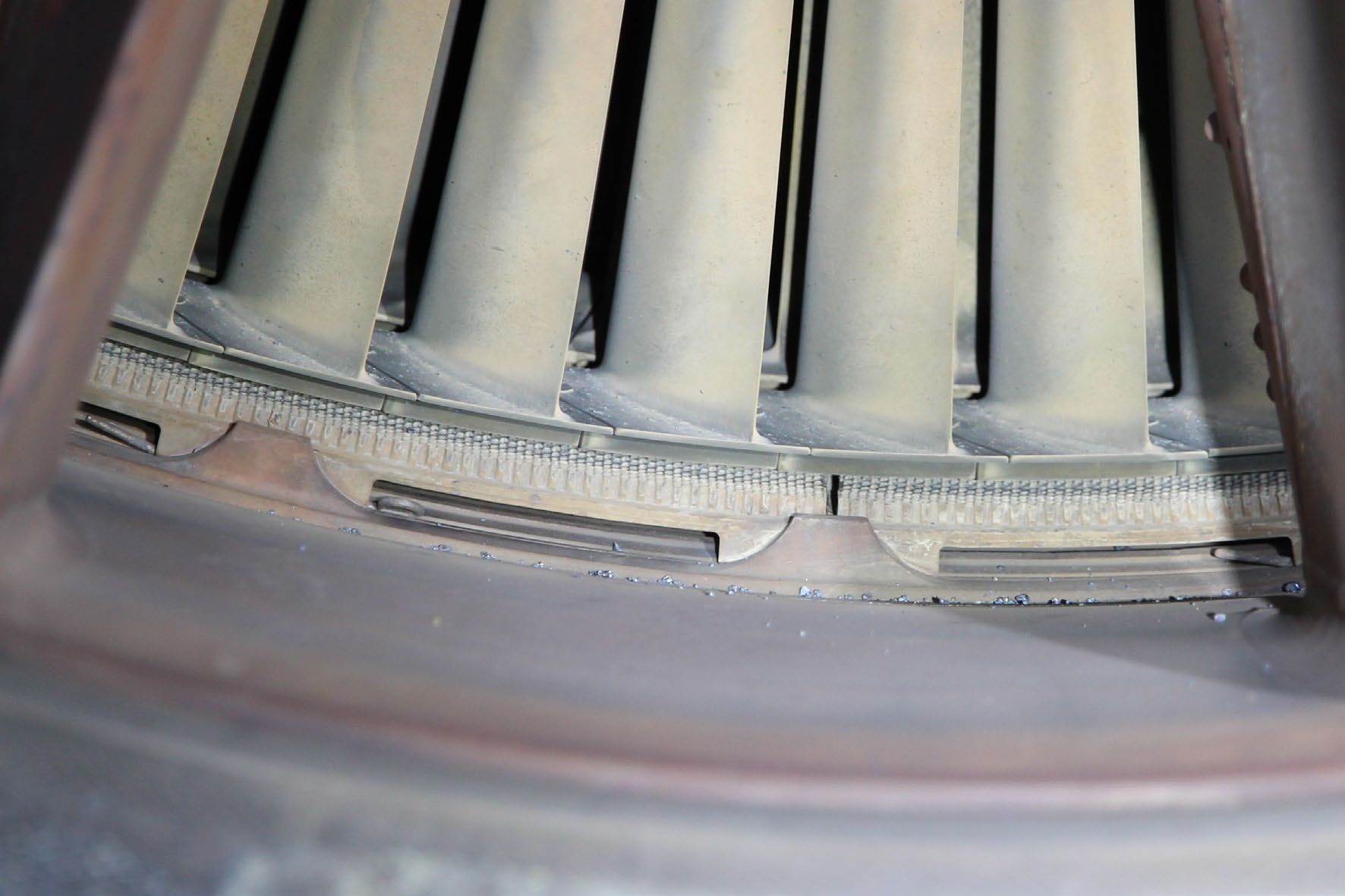 Debris observed in the right engine tailpipe after engine shutdown. [Reproduced from the Official Report]

A borescope inspection of the right engine found damage to stages 3, 5, 6, 7, 8 and 9 of the High Pressure Compressor (HPC) which was consistent with FOD ingestion (see the illustration below). Since this damage was outside AMM limits, the engine was removed from the aircraft and sent for a teardown inspection. 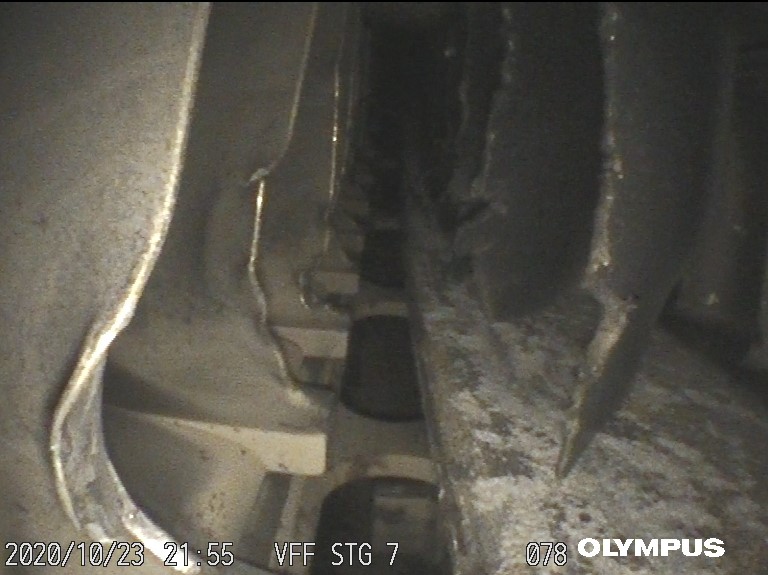 A boroscope image of stages 7 and 8 of the HPC. [Reproduced from the Official Report]

This confirmed extensive small metallic debris in both the low pressure and high pressure turbines and a range of impact damage to the HPC assembly. It also found a ¼’’ hexagon screwdriver tool tip between the combustion case and the engine case with this screwdriver tip (see the illustration below) being intact apart from erosion of the tip due to heat and mechanical damage but generally burnt/discoloured. 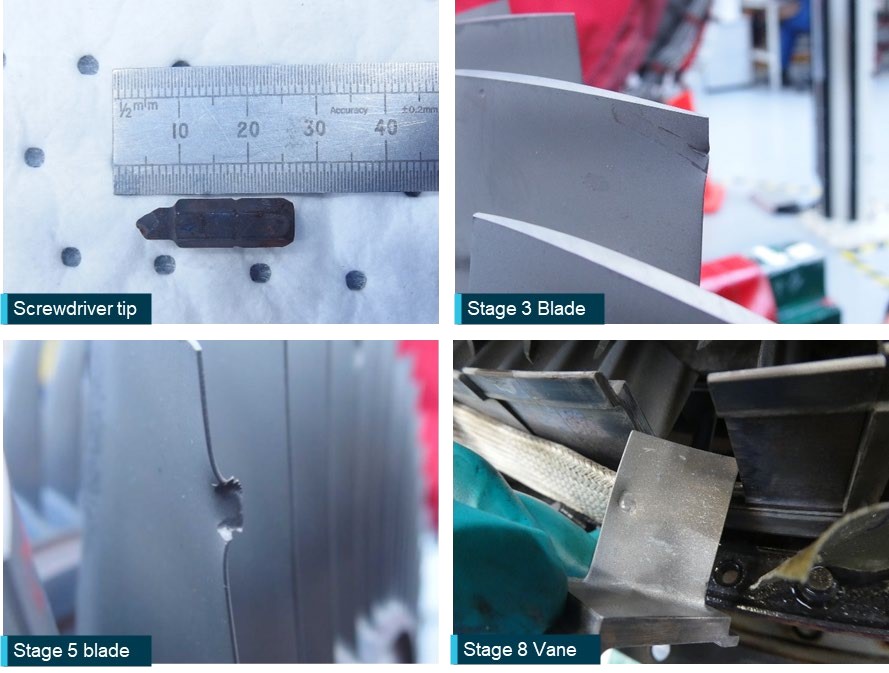 The hexagon screwdriver tip recovered from the engine. [Reproduced from the Official Report]

It was concluded that these findings were consistent with the screwdriver tip having fallen into the LPC bleed duct and subsequently passed through the interstage duct and into the HPC. It was considered that the almost complete lack of damage to the LPC indicated the tip had not been ingested from the runway and that damage found to a fairing screw at the rear of the LPC meant that “it was likely the screwdriver tip had been left in the screw or had fallen into the bleed duct during maintenance”. At the next engine start-up, it would have then travelled into and through the HPC striking various components leaving the series of observed witness marks, before being held captive adjacent to the combustion chamber.

The teardown also found evidence that cyclic fatigue cracks had initiated from the impact damage to one stage 5 turbine blade and one stage 6 stator vane. It was not possible to determine which failed first but either way it was considered that impact of one by the detached part of the other would have added to the debris continuing downstream where further damage included the failure of a further five compressor blades. The collective effect of all this damage would have been sufficient to disrupt the air flow through the HPC and allow the engine to surge thus causing the loss of engine performance. It was also noted that some other stage 5 blades had “tip curl” - a known characteristic sign of hard body impact damage - and that there was “distinctive hexagon-shaped dent” in one stage 8 stator vane.

In respect of the flight crew response to the failure, both pilots commented that they had been surprised by the unexpected onset of the event and noted that “the noise and vibration was far more severe than they had experienced during flight simulator training sessions when practicing for similar types of events”. It appeared that the First Officer had been surprised that it was not possible to correct the deviation which had resulted from asymmetric thrust by using full opposite rudder whereas the appropriate response to a low speed rejected take off - one commenced below VMCG - is differential braking whilst promptly returning the thrust levers to idle.

It was noted that the ATSB had also investigated a 1998 event to a Qantas Boeing 767-300 which had experienced similar engine surging, in this case just after becoming airborne but which had ceased once the affected engine was set to idle prior to a return to land. The cause of this surging was also determined to have been a screwdriver tool tip left in the engine during maintenance.

On the basis of the findings of the Investigation, the ATSB formally documented Safety Messages as follows:

Tool control is an important part of maintenance processes that ensures they do not lead to foreign object damage. Small and seemingly insignificant tool components can, and have, caused significant incidents or accidents. Tool control should extend to pseudo-consumable items such as screwdriver tips and drill bits.

Modern (flight crew) training methods include the use of high-fidelity training devices such as full motion flight simulators. Their design aims to maximise the realism of an artificial environment. However, there is a limit to their ability to replicate extreme events. Flight crew should be aware that the noise and vibration from an actual engine failure may be greater than, or different to, that experienced during simulator training and this could contribute to the effects of startle.

The Final Report was released on 16 August 2021. No Safety Recommendations were made.