On 17 August 2012, a Swiss A320 being positioned under radar vectors for arrival at Geneva was inadvertently vectored into conflict with a Cessna Citation already established on the ILS LOC for runway 23 at Geneva. Controller training was in progress and the Instructor had just taken control because of concerns at the actions of the Trainee. An error by the Instructor was recognised and de-confliction instructions were given but a co-ordinated TCAS RA still subsequently occurred. STCA was activated but constraints on access to both visual and aural modes of the system served to diminish its value.

On 17 August 2012, an Airbus 320 being operated by Swiss on a scheduled passenger flight from Barcelona to Geneva lost separation in Class ‘C’ airspace against a Cessna Citation Excel being operated by German air taxi company Augusta Air inbound to Geneva from Augsburg in day Visual Meteorological Conditions (VMC). Both aircraft were operating in accordance with valid ATC clearances and the sector concerned was being operated by a Trainee and OJT pairing. After the conflict was recognised, ATC de-confliction instructions were given but a co-ordinated TCAS RA activation also occurred just after this before the two aircraft closed to less than 1nm laterally when separated by less than 400 feet vertically.

The conflict was investigated by the Swiss Accident Investigation Board (SAIB). The circumstances which led to the conflict were reconstructed using ANSP radar and other recordings. It was noted that the conflict occurred (just) inside Swiss airspace which was part of the Geneva TMA with classification ‘C’. It was also noted that the prevailing in-flight visibility over Lake Geneva where the incident occurred had been very good, facilitating visual acquisition by pilots of other traffic in their vicinity subject to line of sight.

It was established that the Geneva Arrival Radar position, which was located alongside the position occupied by the Geneva Approach Coordinator, was being manned by a Trainee. The unused and nearby Final Radar position was occupied by the OJTI responsible for supervising the Trainee. He had taken this position “in order to gain a better view of the arriving traffic, to have a personal radar screen, a microphone and a speaker enabling him to monitor the frequency and to intervene promptly if necessary”. Use of a complete workstation avoided having to monitor the traffic and work over the shoulder of the Trainee and the Instructor was wearing a headset which enabled him to monitor the Trainee's telephone conversations in one ear and the frequency being used in the other.

The Cessna Citation was approaching from the north and was in the descent to FL100 and being vectored to join the runway 23 Instrument Landing System (ILS). A single-engined Instrument Flight Rules (IFR) light aircraft was transiting the TMA from the north east to the south west at FL090. The A320 was inbound to Geneva and approaching from the south west in the descent to FL110. The light aircraft was under the control of the Geneva Departure Coordinator, whilst the two inbound aircraft were working Arrival Radar.

Shortly after this and in sequence order:

The disposition of the three aircraft at this time can be seen on the diagram below, which also shows the subsequent tracks of all three aircraft in response to later ATC instructions. 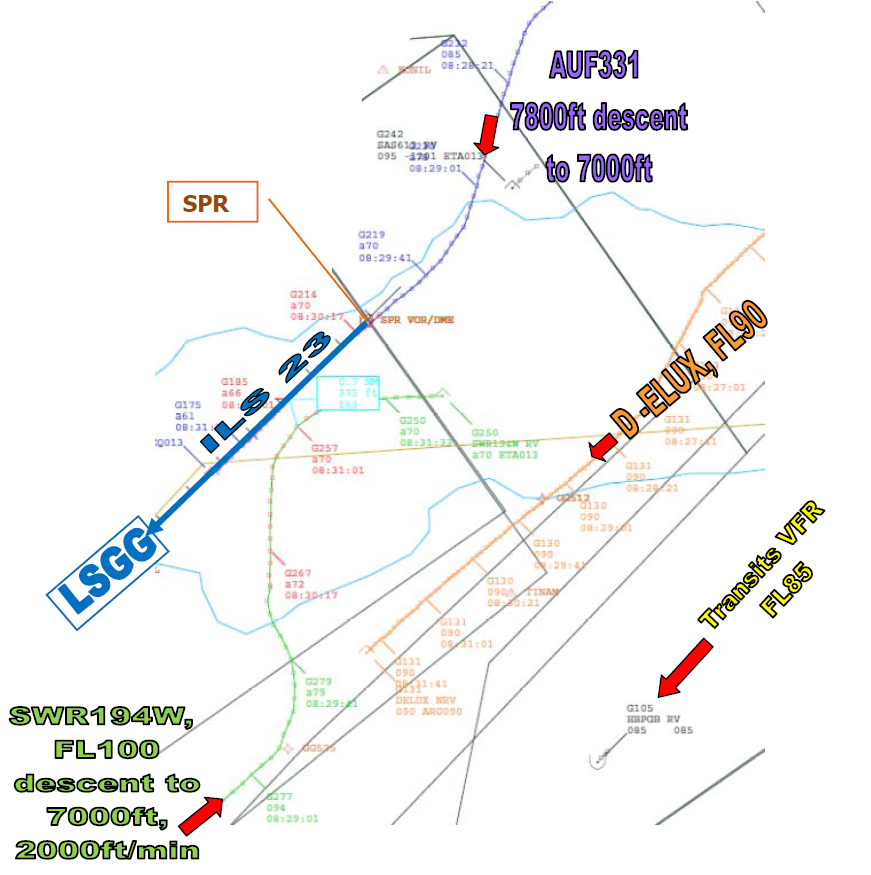 Just under one minute after the Trainee had issued this further descent to the A320, the Instructor, not satisfied that the safety margin between the two opposing track aircraft would be sufficient, took over control of the Arrival Radar position from the trainee whilst remaining at the unused Final Radar workstation. He then instructed the A320 to turn left onto 320° and the Departure Co-ordinator confirmed that the light aircraft had visual contact with the A320. Thirty five seconds after the instruction to turn left, the A320 was instructed to reduce speed to 210 KIAS and turn right onto 360° with the intention of crossing it through the ILS LOC to take up right hand downwind positioning to the 23 ILS. The Cessna, by now on the ILS LOC, was then instructed to reduce speed to 180 KIAS to allow departures.

Almost simultaneously, an Short Term Conflict Alert (STCA) activation occurred on the screens and speakers at the Arrival Radar and Approach Coordinator positions but neither occurred at the Final Radar position now being used by the Instructor to run the Arrival position. Verbal intervention by the Trainee and the Approach Coordinator communicated the conflict to the Instructor who then responded with an instruction to the A320 to “turn right, immediately right heading east” followed by a confirmation to the Cessna to descend on the ILS. Each aircraft confirmed visual contact with the other.

As the aircraft continued briefly to converge at the same altitude of 7000 feet, both received TCAS TAs followed almost immediately by TCAS RAs, the A320 a preventive one to “Monitor Vertical Speed” (i.e. to continue without change of altitude) and the Cessna a corrective one to “Descend, descend now” which coincided exactly with its acquisition of the ILS GS.

Radar recordings indicated that the proximity of the two aircraft reached a minimum approximately 18 seconds after the annunciation of the co-ordinated TCAS RAs and was a lateral separation of 0.7 nm when an altitude difference of 375 feet existed. This time of minimum separation was also 64 seconds after the Instructor had taken control from the Trainee.

It was noted that the Commander of the A320 involved had been performing the duties of PM during the incident flight and that the First Officer had a total of 981 hours as a pilot, all obtained on the type involved. The Commander of the Cessna Citation had been performing the duties of PF and both he and the First Officer were experienced on the type being flown.

It was concluded that “the reactions of the crews were in accordance with the procedures in force” and that the good weather conditions had allowed the crews of both aircraft to visually observe their reciprocal positions during the incident. The focus of the Investigation therefore turned to the ATC aspects of it.

The decision of the Instructor to take over from the Trainee when the A320 was going to pass through the level of the opposite direction light aircraft with what he believed was insufficient separation which could have led to a “potentially dangerous” situation was considered “understandable”. No comment was made on his complete lack of situational awareness in respect of the presence on the ILS of the Cessna, but his actions once he had been made aware of the conflict he had created were considered “quick and adequate”.

The main organisational concern was centred on the effects which had followed from the Instructor’s use of the vacant Arrival Radar workstation to supervise - and subsequently take over from - the Trainee given that without an essential reconfiguration (which he had not performed) he was not able to see the activated STCA Alert. It was also noted that it was not possible for the audible STCA Alert to be transmitted to any controllers’ headsets and that the speakers used to broadcast it did not include one at the workstation used being used by the Instructor. This had meant that it was possible for the Instructor to be sufficiently distracted by radio communications which he had been engaged in when the STCA activation occurred not to be aware of it.

The formal statement of Cause from the Investigation was that the conflict resulted from “a dangerous convergence between two aircraft in IFR flight, one under radar vectors in the acquisition phase for the runway 23 ILS and the other under radar vectors following the take-over of control (from a trainee) by the (supervising) instructor."

It was additionally found that Contributory Factors had been:

Safety Action taken by ANSP Skyguide in publishing, on 11 June 2012, a Safety Letter reminding their Geneva controllers of “certain limitations of display and STCA Alerts at the FIN (Final Radar) position” was noted.

The Final Report was completed on 29 May 2013 and approved by the management of the Swiss AIB on 18 July 2013. The conflict was determined to be a Category ‘A’ AIRPROX in accordance with the applicable ICAO classification.