On 10 July 2014, the crew of a Bombardier CRJ200 on a visual go around from an approach to runway 26 at Port Elizabeth took visual avoiding action overhead of the aerodrome to ensure safe separation from an Airbus A320 which had just taken off. Both aircraft also received TCAS RAs. Minimum achieved separation from radar was 370 metres laterally and 263 feet vertically. The Investigation noted that the go around resulted from the TWR controller, who was supervising a student controller, clearing the A320 to enter the runway and take off when the CRJ200 was on short final to land.

On 10 July 2014, a Bombardier CRJ 200 (ZS-NMF) being operated by SAA subsidiary SA Express on a domestic passenger flight from King Shaka (Durban) to Port Elizabeth as EXY 336 came into close proximity in day VMC with an Airbus A320 (ZS-SZZ) being operated by South African Airways on a domestic passenger flight from Port Elizabeth to O R Tambo (Johannesburg) as SAA410 as the CRJ 200 made a go around and the A320 climbed after take-off. The CRJ 200 crew had visual contact with the climbing A320 and restored safe separation by turning away into the visual circuit.

An Investigation was carried out by the Accident and Investigation Division of the South African CAA. The FDR from the CRJ 200 was obtained and successfully downloaded. Although the FDR from the A320 was requested, neither it nor a data download from it was provided by the Operator.

It was established that the arriving CRJ 200 had been on a visual approach to runway 26 (the ILS was out of service at the time due to calibration) and that the TWR controller had, after checking with the crew of the departing A320 that they were ready for an immediate take-off with "no stopping on the runway" had cleared the A320 to enter the runway and take off. The CRJ, by then approximately 2nm from the runway threshold, was told "continue with approach landing assured". When the CRJ was at about 1nm from the threshold, the crew decided that separation from the rolling A320 was insufficient and initiated a go around. Almost immediately after this, 32 seconds after the "landing assured" transmission, the TWR controller instructed the crew to make a go around and report on left downwind.

The CRJ crew deviated slightly to the right and kept the A320 climbing ahead and below in sight and climbed to 1,800 feet. As the A320 climbed towards that level, a coordinated TCAS RA was annunciated with the A320 reported by the CRJ crew as having been "approximately 5° to 10° to the left of them and slightly below them". The RAs were 'CLIMB' for the A320 and 'DESCEND' at approximately 1000 fpm for the CRJ. The CRJ crew determined that with the other aircraft in sight and likely to continue ahead or turn left, a right turn away from it was preferable to a TCAS descent in close proximity. As the A320 passed through the level of the CRJ a few seconds later, the CRJ was observed on radar (see the diagram below) turning right 0.5nm behind the A320 which was then issued with a left turn. Separation between the two aircraft was re-established 37 seconds later and the CRJ subsequently landed from a right hand visual circuit without further event and the A320 continued to destination. Minimum separation from the recorded radar data was 0.32nm (370 metres) horizontally and 263 feet vertically. The closest point of approach occurred within the aerodrome perimeter - see the relative positions on the second diagram below. It was noted that 30 seconds after issuing the go around instruction to the CRJ, the TWR controller had instructed the CRJ crew to commence an early left turn "when safe and able" and followed that with advice of "essential traffic", a Cessna Citation calibration aircraft holding "to the south of the aerodrome". By this time, the A320 was passing 1,300 feet and the CRJ had already reached 1,800 feet and levelled off. 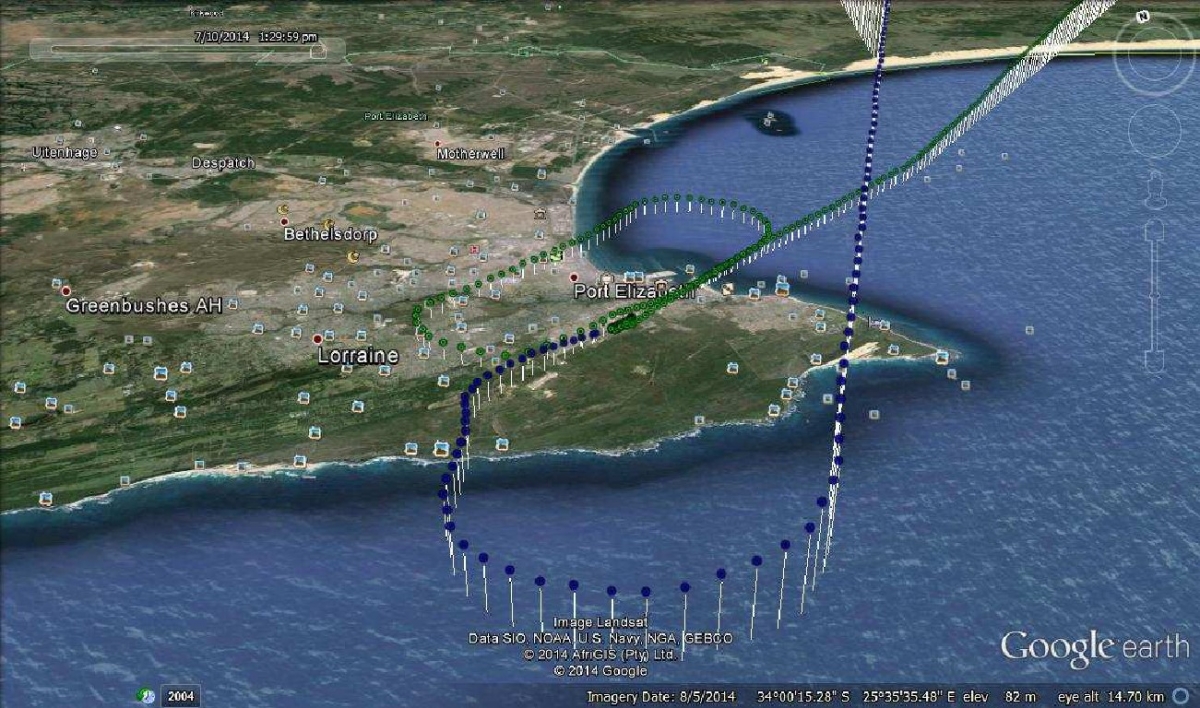 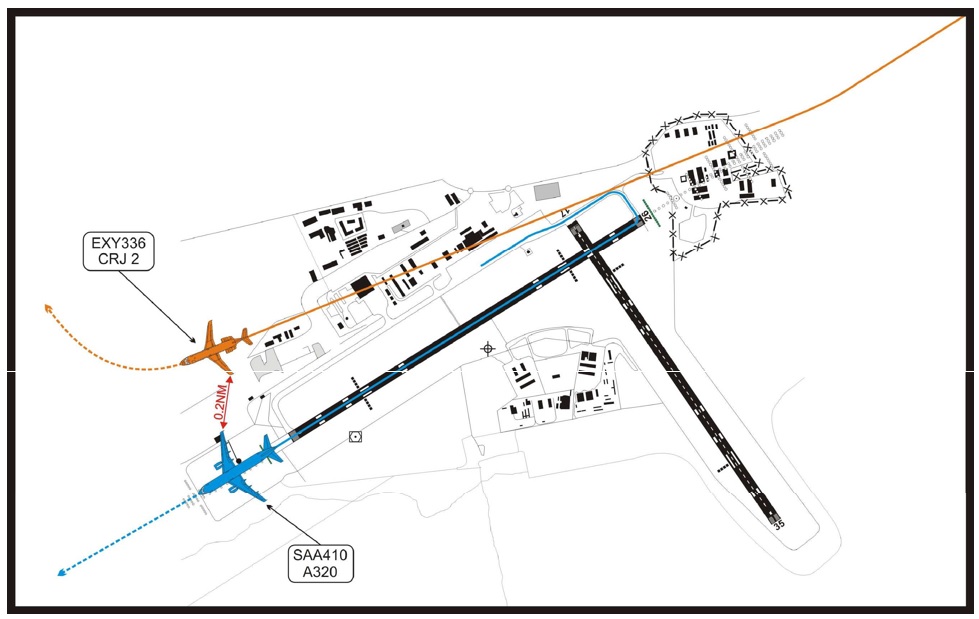 It was noted "the controller allowed [the ICAO Doc 4444 PANS-ATM radar] minima to reduce below 5nm" but also that the CRJ crew had failed to advise the controller that the clearance to make a left turn into the circuit "could not be complied with […] even though they (had) read back the controller’s clearances" in that respect. This was identified as contrary to Chapter 2 of ICAO Doc 9432 which details General Operating Procedures and states in paragraph 2.8.3.10 that "If at any time a pilot receives a clearance or instruction which cannot be complied with, that pilot should advise the controller using the phrase 'UNABLE' and give the reasons".

The A320 crew 'Before Take Off Checklist' as read by the PM and confirmed by the PF was found to contain an item requiring the crew to check that the approach is clear of traffic. In the case of the A320 departure, it was noted that it was the Captain as PM who would have needed to make the check as well as read the checklist item. The Operator advised that just nine days prior to the event under investigation, they had changed their Standard Operating Procedures (SOPs) to allow the A320 to be taxied from either seat and also noted that the A320 "was a fairly new aircraft" on the Port Elizabeth route.

In respect of the ATC context for the investigated event, it was noted that:

The 37 year old TWR Controller stated that he had been "busy instructing a student" when the investigated event occurred, however the Investigation found that this student controller "was only there in a surveillance capacity".

The Probable Cause of the Serious Incident was formally determined as "the controller did not effectively monitor the flight progress of the (CRJ200) aircraft on final approach, which resulted in a loss (of) separation (with the departing A320) (resolved by) evasive action being taken by the crew of (the CRJ200 which had gone around)".

Three Safety Recommendations were made as a result of the occurrence as follows:

The Final Report was published on completion of the Investigation.