On 27 September 2017, an Airbus A320 being manoeuvred off the departure gate at Dublin by tug was being pulled forward when the tow bar shear pin broke and the tug driver lost control. The tug then collided with the right engine causing significant damage. The tug driver and assisting ground crew were not injured. The Investigation concluded that although the shear pin failure was not attributable to any particular cause, the relative severity of the outcome was probably increased by the wet surface, a forward slope on the ramp and fact that an engine start was in progress.

On 27 September 2017, an Airbus A320 (EC-LVQ) being operated by Iberia Express on a scheduled international passenger flight from Dublin to Madrid was hit by the tug, which was manoeuvring it off gate 318R onto apron taxiway 5 in normal day visibility from where taxiing could commence, when the tow bar shear pin failed. As a result of this, the driver lost control and the tug then collided with the aircraft right engine causing damage to both the tug and the aircraft but no ground crew injuries. 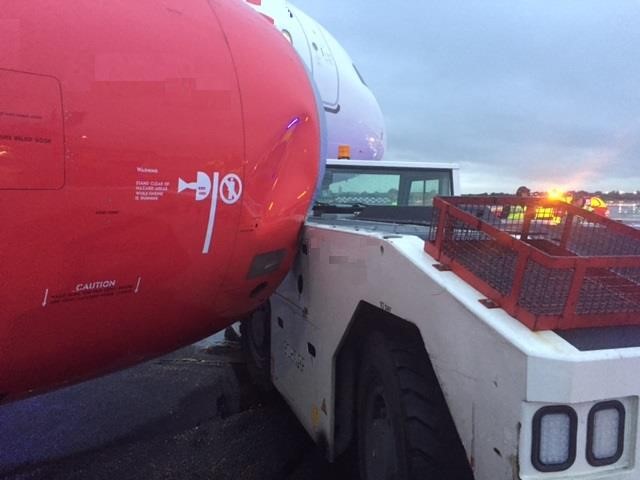 The tug embedded in the right engine cowling. [Reproduced from the Official Report]

An Investigation was carried out by the Irish AAIU. Recorded engine data covering the start which was taking place at the time the shear pin failed was obtained from the PCMCIA card in the Fight Data Interface Management Unit.

It was noted that the tow was being performed for the aircraft operator by a ground services contractor. It was established that departures from gate 318R required the aircraft to be positioned by a push back tow followed by a pull forward tow so that the aircraft could begin taxiing on Apron taxiway 5 from the position identified as TRP ‘N’. The illustration below shows the pushback/pull forward lines marked on the apron surface (and required to be followed for A320 push-pull towing from gate 318R in the Airport Operator’s Aerodrome Manual) and the estimated actual pushback and pull forward track. A standard three-man ground crew team was used - a supervisor in contact with the flight crew, the tug driver and a wingman.

The manoeuvre proceeded uneventfully until the tug was being turned to the right to align the aircraft with the taxiway at TRP ‘N’, the flight crew having been previously cleared by the headset operator to start the right engine. As this start was being carried out, the tow bar shear pin failed and the nose of the aircraft began to overtake the tug. The headset operator immediately instructed the flight crew to shut down the engine because of the perceived risk to the tug driver which they did. Although the tug driver attempted to stop the tug, it was pulled and rotated as the aircraft continued to move forward. The aircraft then turned slightly to the right still attached to the tug via the tow bar and came to a stop with the tug wedged against the right hand side of the starboard engine cowling. The headset operator informed the aircraft crew that a collision (which they had been unaware of as they had not been looking outside the flight deck and the impact of the aircraft had been “hardly noticeable”) had occurred and asked them to set the parking brake. The tow bar shear-pin, which is a protection against mechanical overload of the tow bar, was found to have failed leaving only the head of the pin in place. The detached lower part of the shear pin was not located. 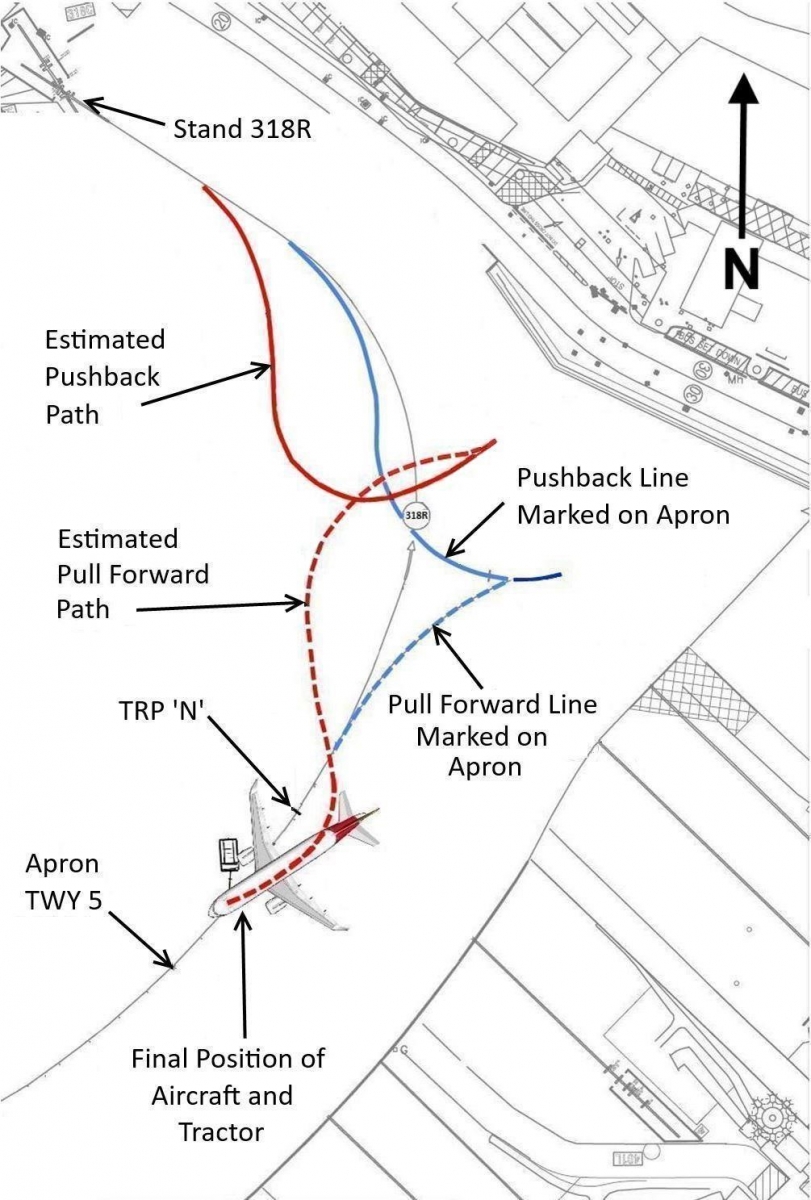 The track taken by the aircraft after the initial push back was followed by a pull forward. [Reproduced from the Official Report]

It was noted that the tug being used was appropriate to task and was being used with the driver facing the aircraft for the push back and so the pull forward was conducted with the vehicle in reverse and its driver looking over his shoulder to see where they are going. With the aircraft nosewheel steering disconnected, the maximum steering angle is +/-95° either side of the aircraft centreline and this range is marked on the aircraft as a reminder to tug drivers towing aircraft.

CCTV data showed that towards the end of the pull forward the aircraft and tug moved in a manner that would be consistent with a failure of the shear-pin prior to aircraft nose overtaking the tug and that it could be estimated that after this point, the aircraft had continued forward one full aircraft length.

The Investigation considered whether there had been any factors which might have increased the chances of the tow bar shear-pin breaking as follows:

Engine data indicated that the maximum rotational speeds reached during the start were 54.9% N2 and 16.5% N1 at which point the start was stopped in response to the call from the headset operator. The engine manufacturer advised that nominal engine speeds at Ground Idle were approximately 60% N2 and 19% N1 at which speed the resulting forward thrust “should have been less than 700 pounds”.

It had been raining at the time of the investigated event and the ramp surface was wet. There was no evidence of surface contamination “other than water”.

It was found from a ramp survey document that the area where the event occurred had a down-hill slope of approximately 1% which was in accordance with the applicable EASA specifications and guidance material.

The shear-pin which broke was a genuine part of the correct specification and there was no evidence that its pre-break condition had led to it breaking when it did.

CCTV data confirmed witness statements that the pull forward had been conducted “at a slow walking pace” throughout with the towbar angles achieved not appearing to exceed the applicable limitations for an A320.

Although the tow did not follow the marked apron guidance line applicable (only) to A320 aircraft, the Investigation was satisfied that the deviation did not result in the exceedance of the applicable aircraft type ground manoeuvring limitations but did result in more acute turning angles by the tractor as it approached Apron Taxiway 5. It was noted that the ground handling contractor involved handles other aircraft types departing this gate which are not required to follow the apron guidance line and information provided to the Investigation indicated that it may have become “custom and practice” for the contractor’ ground crews to manoeuvre all aircraft off.

None of these factors were considered contributory to the shear-pin breakage and it was noted that shear-pins sometimes fail under normal load conditions. It was noted that that the shear-pin merely aligns the towbar with the towbar head to which the tug is attached but that without this constrained alignment, it would have been impossible to perform the preceding pushback manoeuvre. It can therefore be concluded that, for undetermined reasons, the shear-pin did fail during the latter stages of the pull forward manoeuvre.

The summarised Findings of the Investigation included the following:

The Probable Cause of the Serious Incident was determined as “failure of the towbar shear-pin during a pull forward manoeuvre”.

The Final Report of the Investigation was published on 12 June 2018.