On 23 February 2018, an Embraer 195LR and an Airbus A320 on SIDs departing Brussels lost separation after the 195 was given a radar heading to resolve a perceived third aircraft conflict which led to loss of separation between the two departing aircraft. STCA and coordinated TCAS RA activations followed but only one TCAS RA was followed and the estimated minimum separation was 400 feet vertically when 1.36 nm apart. The Investigation found that conflict followed an error by an OJTI-supervised trainee controller receiving extended revalidation training despite gaining his licence and having almost 10 years similar experience in Latvia.

An Investigation was carried out by the Air Accident Investigation Unit (Belgium) - AAIU. The Investigation relied on recorded ATC data which included TCAS RA Mode ‘S’ downlink information from both aircraft. These data were used by EUROCONTROL to run a simulation of the event using their Interactive Collision Avoidance Simulator (INCAS) which provided valuable insights. DFDR and CVR data from the two aircraft involved were not sought.

No flight crew details were recorded but the 30 year-old trainee controller, who had level 5 English Language certification, was working under the supervision of an experienced 52 year-old Instructor with a level 4 English Language certification. It was noted that the trainee controller had, since 2008, held a Latvian controller licence with ratings for Area Control and Approach Control at Riga ACC. He was on his fifth month of working under supervision at Brussels having had to repeat his 30-day Phase 2 training before commencing his Phase 3 training from which he would have been eligible for release as a qualified APP controller if, with 13 training days of this phase left, he had been assessed at the end of it to be sufficiently competent. It was therefore considered “imperative” that at this late stage of their training, a trainee must demonstrate the ability to “work alone or at least, to some degree, independent from his OJTI” (On-the-Job-Training Instructor). The trainee himself described his whole training period as having been “stressful”. It was found that the applicable working arrangements meant that the supervising OJTI ultimately responsible for the position occupied by the trainee was such that the instructor, seated behind and to one side of the trainee, was not able to see the disposition of traffic on the radar screen directly in front of the trainee.

The E195 took off from runway 07R first on a CIV 7J SID and was followed two minutes later by the A320 on a SPI 5J SID. The tracks of these two SID did not cross although both involved right turns, the CIV 7J right turn being inside the SPI 5J one. Both aircraft were transferred to the Departure frequency where the controllers involved were in position. Already on frequency was a B350 which had departed Antwerp on a GILOM 2F SID and had been cleared to continue climbing to FL 150. The three SIDs involved and their initial tracking points are shown in the illustration below.

The trainee detected a potential conflict between the B350 climbing out of Antwerp which he had cleared to FL 150 and the E195 which he had cleared to climb to FL 070. Shortly after re-clearing the E195 to FL 080, he instructed the B350, which was at that time almost overhead the BUN DVOR, direct to the REMBA waypoint. This track change put the B350 on course to cross the extended centreline of the Brussels departure runway 07R at around 14 nm. The controller then instructed the E195 to turn early towards the CIV DVOR and 40 seconds later instructed the A320 to proceed direct to way point REMBA. At this time, the E195 was passing FL 061 and climbing at 700 fpm and the A320 was passing 4,900 feet and climbing at 1,400 fpm. 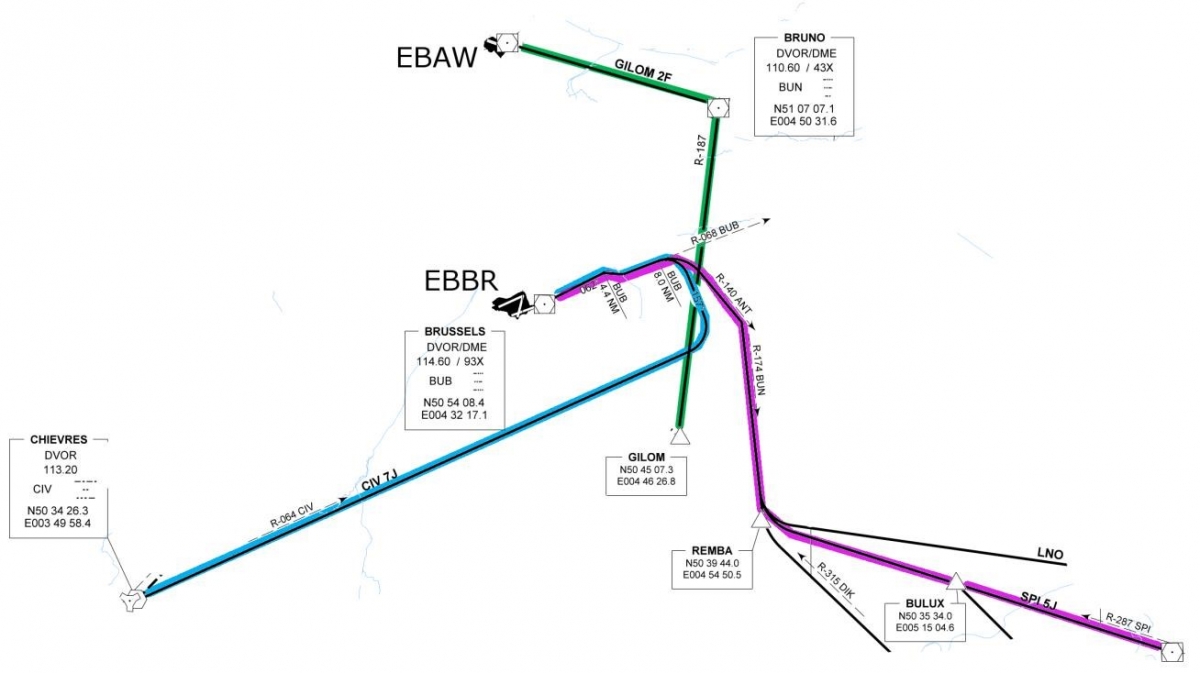 As both aircraft began their right turns, the B350 was still some distance away but the effect of the different climb rates of the E195 and the A320 as they made these turns - the A320 climb rate having now increased to 3,400 fpm – was that the A320, turning right inside the right turn of the E195, was closing it. Some 46 seconds after the A320 had been instructed to proceed direct to REMBA, an STCA alert based on the proximity of the E195 and the A320 appeared on the controller’s radar display (see the illustration below). At this time, the A320 was passing FL 069 climbing at 1200 fpm and the E195 was passing FL 067 and climbing at 700 fpm.

The controller almost immediately responded to the STCA by attempting to stop the A320 climbing but used a non-existent callsign made up of parts from those of two different aircraft so it had no effect. In any case the A320 was already above the E195 and climbing at a much higher rate. Six seconds after this, he told the E195 to “turn left immediately” and then, as vertical separation remained at 400 feet with lateral separation reducing, he told the A320 to “turn left heading ... stop climb immediately”. An estimated three seconds after this, both aircraft received coordinated TCAS RAs, the E195 a ‘LEVEL OFF’ and the A320 a ‘CLIMB’. Whilst the E195 levelled off promptly, the A320, with its climb rate now down to 400/500 fpm, both failed to report its RA and ignored the corresponding requirement to increase its rate of climb to at least 1,500 fpm. When, after a further eight seconds, the controller told the E195 (which had also not reported its RA) to descend to FL 060, its crew responded with “unable TCAS RA” although with the RA still active, the E195 subsequently began a slow descent which did not generate any resultant new RA against other traffic. Finally, an estimated 11 seconds after the first RAs, the A320 received a ‘LEVEL OFF’ RA, which was followed by a marginal reduction in the previously modest climb rate shortly before ‘CLEAR OF CONFLICT’ was broadcast after 19 second-long active TCAS RAs.

The radar replay (left) at the time of the STCA and how the controller’s radar display (right) would have shown it shortly after it had appeared. [Reproduced from the Official Report]

It was assessed that the intensity of traffic in the sector at the time of the event had been “average” and noted that the prescribed separation in the Class C airspace where it occurred was 1000 feet and 3 nm. It was evident that the conflict had arisen because the trainee controller had created a conflict between the E195 and A320 by focusing only on what he considered was a potential conflict between the clearance he had given to the B350 with the one he had given to the A320. He had been “surprised” by the STCA and his failure to use the callsign he had intended to had delayed his attempt to intervene until after separation between the E195 and the A320 had been lost and the TCAS RAs were imminent.

It was noted that the Instructor had been unaware of the potential conflict until the STCA appeared and attributed this to a combination of his confidence that his late stage trainee should be able to cope with the undemanding traffic situation, his somewhat obstructed view of the radar display from his seating position and the fact that the trainee routinely “speaks naturally with a low voice and keeps his instructions to aircraft short, shorter than usual for a controller”. The latter in particular meant that “the initiation of the problem - the instruction given to the A320 to turn to REMBA - was not heard by the Instructor”.

It was established that “the closest point of approach between the two aircraft was estimated to be 400 feet vertically and 1.36 nm horizontally”. The Investigation documented the following comments on the findings of the Investigation:

The Cause of the investigated event was formally documented as "the trainee controller gave an instruction to the A320 to turn earlier than foreseen by the published (SID) route without taking the projected flight path of the ERJ195 into consideration (having) assumed that there would be enough separation".

Four Contributory Factors were also identified as follows, the one in bold type was additionally classified as a ‘Safety Issue’:

Five ‘Findings that increased risk’ were also identified as follows, the two in bold type were additionally classified as ‘Safety Issues’:

Six ‘Other Findings’ were also formally documented as follows:

Safety Action taken during the course of the Investigation as a result of it by ANSP Skeyes (Belgocontrol as rebranded in 2018) was noted as the modification of the Brussels ACC ‘APP’ section so that up to 3 OJTI/Trainee pairs can operate with both the OJTI and the trainee having access to their own sole-use radar display.

The ‘Issue Date’ of the Final Report of the Investigation was 1 September 2020 and it was released later the same month.