On 27 August 2018, an Airbus A320 level at FL 300 encountered unanticipated turbulence which caused one of the cabin crew to fall and sustain what was belatedly diagnosed as spinal fracture. The Investigation found that the aircraft had flown through the decaying wake vortex from an almost opposite direction Boeing 747-400F at FL310 which had been observed to cross what was subsequently found to be 13.8 nm ahead of the A320 prior to the latter crossing its track 1 minute 40 seconds later that coincided with a very brief period in which vertical acceleration varied between +0.19g and +1.39g.

On 27 August 2018, an Airbus A320 (JA14VA) being operated by Vanilla Air on a scheduled domestic passenger flight from Kansai to Amami as JW873 (callsign JA14VA) and in the cruise at FL300 in day VMC was suddenly subjected to a short period of turbulence in otherwise smooth flight conditions during which one of the cabin crew fell without apparently sustaining any injury beyond possible bruising. Subsequent to the completion of the remainder of the flight duty that day, a sustained pain without improving trend caused her to undergo a hospital examination that identified a minor spinal fracture which led to an accident investigation being opened.

After receiving notification of the accident seven days after it had occurred, the Japan Transport Safety Board (JTSB) commenced an Investigation. By the time of notification, relevant data on the FDR and CVR had been overwritten but QAR and recorded ATC radar data were available.

It was established that assessment of the flight crew at the time of the turbulence episode was that although it had justified a check with the senior cabin crew as to the situation in the cabin after it had occurred, the effect as experienced in the fight deck had not been considered severe. The flight crew had also previously observed crossing traffic above their level at a distance sufficiently distant (approximately 20 nm away) for the Captain to judge that a wake turbulence encounter was not likely and that it was therefore not necessary to put the seat belt signs on as a precaution. The aircraft type could not be discerned and had initially been detected on the TCAS display and then almost immediately visual contact was obtained. No corresponding traffic information was received from ATC.

Data from the QAR indicated that the wake encounter had led to an almost instantaneous variation in vertical acceleration between extremes of +0.19g and +1.39g with little associated change in the attitude of the aircraft. The A320 had been on an approximately south westerly track and the crossing aircraft, a Boeing 747-400F being operated by China Airlines, had been on an approximately north easterly track but with essentially opposite tracks offset by 22° - see the illustration below. By the time the wake turbulence was encountered, which was very close to the point where the track of the 747 had crossed the subsequent track of the A320 one minute and 40 seconds earlier, the two aircraft were 13.3 nm apart.

The member of cabin crew who fell was in the rear galley at the time and was preparing for cleaning after in-flight service had finished. She reported having had no time to grab something around her for support and had fallen down after “feeling as if both her feet floated in the air” before hitting her buttock hard against the floor. Although suspecting that only bruising had occurred, in the days following, there was no trend of improvement in the initial level of pain and a hospital medical examination seven days after the event disclosed a fracture to the lower spine. 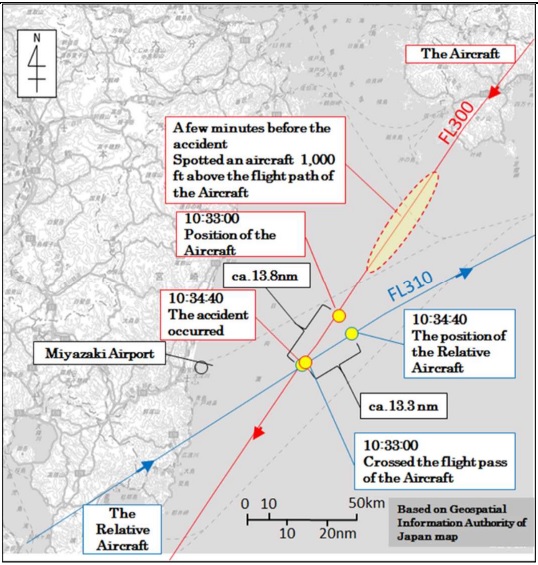 The atmospheric conditions in the area where the turbulence occurred were examined and it was concluded that the prevailing high pressure and weak (5-10 knots) upper winds would have been conducive to slow decay of wake vortices.

The Investigation noted the content of the 2017 EASA Safety Information Bulletin on ‘En-route Wake Turbulence Encounters’ and that in the case of 1000 foot vertical separation in RVSM airspace, atmospheric turbulence attributable to wake vortex may still be present at up to 25 nm behind the source aeroplane and may have drifted away from the track flown.

It was concluded that this meant that the prevention of similar accidents may be usefully assisted if when in RVSM airspace, flight crew were to make a precautionary PA whenever they observe traffic above and up to 25 nm away on a track which they may subsequently encounter.

The Investigation documented the Probable Cause of the accident as an upset to the aircraft during the cruise caused by wake turbulence from another aircraft which still remained along and below its flight path and which caused one of the cabin crew to fall and sustain injury.

Safety Action taken by Vanilla Air as a result of the findings of the Investigation were recorded as having included but not been limited to the provision of additional guidance to cabin crew on how best to respond if unexpected turbulence occurs and on the importance of reporting turbulence encounters even where no injury results and the role of the Senior Cabin Crew Member (SCCM) in that process.

The Final Report was adopted by the JTSB on 10 May 2019 and published on 30 May 2019. No Safety Recommendations were made.