On 28 December 2014, an A320 crew took unapproved action in response to a repeating system caution shortly after levelling at FL320. The unexpected consequences degraded the flight control system and obliged manual control. Gross mishandling followed which led to a stall, descent at a high rate and sea surface impact with a 20º pitch attitude and a 50º angle of attack four minutes later. The Investigation noted the accident origin as a repetitive minor system fault but demonstrated that the subsequent loss of control followed a combination of explicitly inappropriate pilot action and the absence of appropriate pilot action.

On 28 December 2014, ATC lost contact with an Airbus A320 (PK-AXC) being operated by Indonesia AirAsia on a scheduled passenger flight from Surabaya to Singapore which had just reached its cruise level of FL320 in day IMC. It was subsequently found to have crashed after a loss of control with the sea impact resulting in the destruction of the aircraft and the deaths of all 162 occupants.

An Investigation was carried out by the Indonesian National Transportation Safety Committee (NTSC) - the Komite Nasional Keselamatan Transportasi (KNKT). After an intensive sea search, the FDR and 2-hour CVR were both recovered - respectively on 12 and 13 January 2015 - and their data were subsequently successfully downloaded. Recorded ATC data were also available. Some of the wreckage was eventually recovered.

It was established that the aircraft had reached FL320 uneventfully fourteen minutes after take off with the First Officer as PF. Twelve minutes later, the first of four identical Cautions concerning the status of both rudder limiters had occurred. The first three were found to have been actioned by the Captain in accordance with the corresponding ECAM drill and each time, normal system status was restored. Fourteen minutes after the first Caution, the fourth one occurred. This time, the pilot response was not in accordance with the ECAM drill, which required the sequential resetting of the two Flight Augmentation Computers (FAC) using their overhead panel switches, but instead involved the tripping and resetting of the 26V AC CB for each FAC in turn. The effect of this unapproved in-flight action, which it was found that the Captain had seen being carried out on the ground by an engineer responding to a report of the same fault three days earlier, was that neither FAC returned to normal functionality and successive Cautions for first a single FAC Fault and then a dual one were annunciated. This resulted in a reversion of the Flight Control System from Normal Law to Alternate Law, the most immediately obvious effect of which was that the AP and A/T were automatically disconnected, which it was considered would have been unexpected by both pilots.

One of the other effects of Alternate Law was a rudder deflection to the left of 2º, which led to an uncommanded roll to the left at a rate of 6º/second, about twice as fast as the normal rate of roll. There was no pilot response to this developing wing drop for 9 seconds, by which time the bank angle had reached 54º. It was considered that the attention of the PF may have temporarily been diverted from the PFD although noted that the rate of roll had been well above the generally accepted threshold for vestibular sensitivity. When PF side stick movement did begin, it was very abrupt and consisted of a substantial rearward movement followed by a maximum deflection to the right. The effects of this were a reduction in the left bank from 54º to 9º in 2 seconds and an increase in the pitch attitude to 9º up in 3 seconds. The latter was noted to have been far in excess of the less-than-2º pitch attitude which had been required to maintain level flight with the AP engaged. The Captain was recorded as exclaiming "Oh my God" as this abrupt response was occurring.

Immediately the wings had almost returned to level, maximum deflection left was input to the right side-stick and the left bank increased rapidly to 53º, almost where it had just been. One second after this, with right side stick rearward pressure still being applied and the aircraft climbing through FL329 just 9 seconds after the AP had disconnected as a result of the Captain's FAC reset action, the Angle of Attack (AoA) - which was not displayed to the pilots - reached 8º, the threshold for a Stall Warning and the sound of this was momentarily recorded. The Captain then repeated the word "level" four times but this was only followed by a slight movement of the right side-stick towards neutral and the rearward movement was resumed almost immediately. Twice during the next ten seconds, he made a 2 second input on his side stick without any call that he wished to take control. He then called "pull down" - repeated several times - just before the Stall Warning was reactivated and again just after it started. Apart from a single second shortly after the reactivation, the Warning was then continuous - as was buffet - until the final recorded data shortly before impact as the right side-stick pitch up command remained substantial and continuous until impact just over three minutes later.

Six seconds after the Stall Warning had become continuous, the First Officer is heard exclaiming in French "what is happening" as the Captain begins a continuous input to his side-stick, still without announcing that he wished to take control or pressing and holding his side-stick take over button (for the required 40 seconds) which would have been necessary to gain this if the other pilot did not cease their inputs. On two subsequent occasions, the Captain's take over button was pressed for 2 and then 5 seconds, but because this had no effect, the side-stick inputs of both pilots were, in accordance with system design, summed for the remainder of the flight.

Cruise Power remained set as the aircraft pitch attitude reached 45º nose up, speed reduced to as low as 55 knots and AoA increased to 48º. At a climb rate of up to 11000 fpm, a maximum of FL385 was reached just under a minute from the AP disconnect. At the top of this climb, with left bank reaching a maximum of 104º, the Captain exclaimed "My God" and the aircraft began to descend, stalled, at up to 20,000 fpm. Fifteen seconds into the descent, the thrust levers were retarded and passing approximately FL290 half a minute later, the wings had returned to approximately level and the pitch angle to approximately zero. However, the AoA remained "almost constant at approximately 40º up". The thrust levers were returned to their cruise power position and the Captain called "pull, pull" and then "pull down". Forty seconds later at about 17000 feet, thrust was increased and the Captain called "pull up". Impact occurred just under 1½ minutes later - four minutes after the AP had disconnected.

No emergency or other call was made from the aircraft to ATC once the pilot response to the succession of Cautions had ceased to follow the ECAM actions and begun to have unexpected consequences and a previously requested clearance to climb given by ATC was not acknowledged.

The prevailing weather conditions in the area at the time were examined and other than the strong likelihood that the aircraft had remained mainly if not entirely within convective cloud as control was lost, it was concluded that "FDR data indicated that the flight was not affected by the weather condition and investigation concludes that the weather was not factor to the accident". 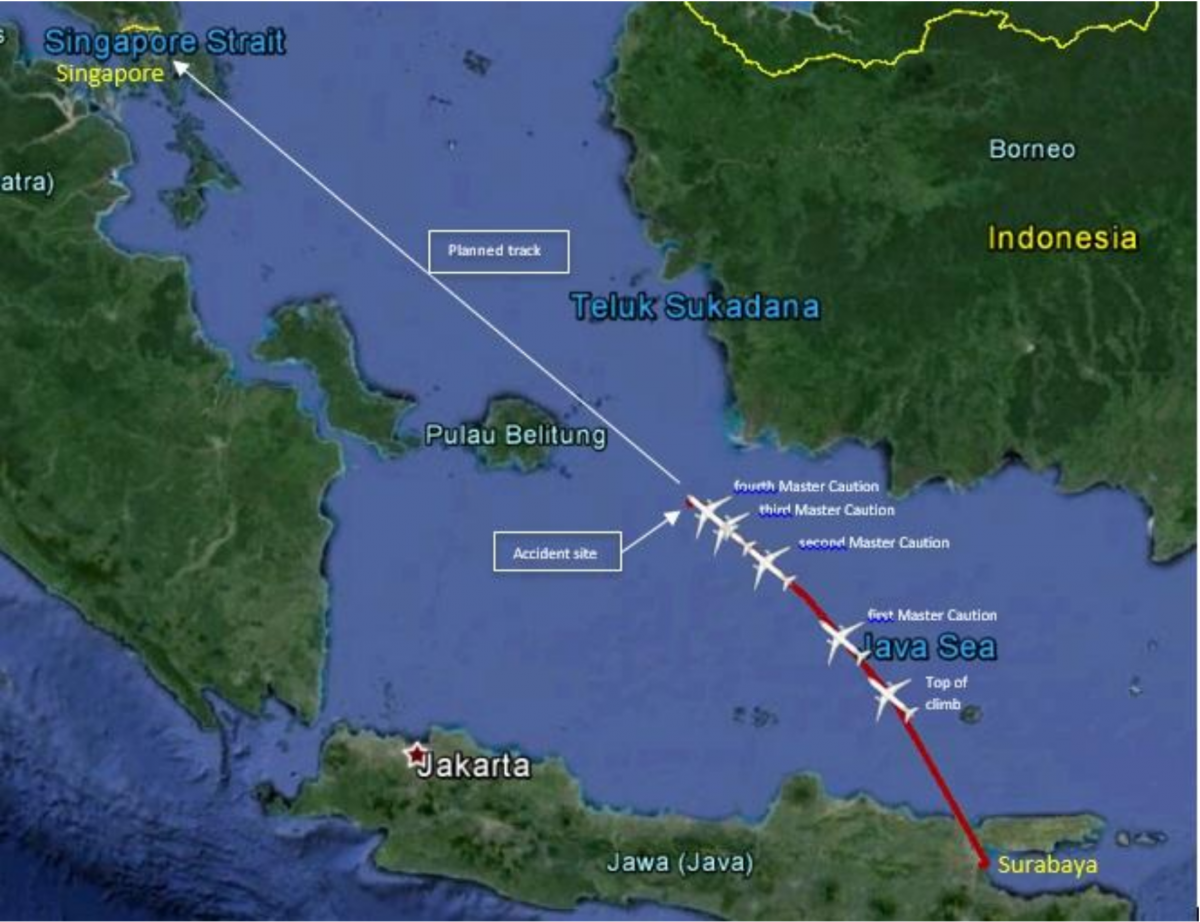 It was found that the 53 year-old Captain, an Indonesian national, had 20,537 hours flying experience including 4687 hours on the accident aircraft type and had been an Air Force pilot for 10 years until 1993. He had joined the Operator on the Boeing 737 fleet and later trained and qualified on the A320 through a conversion which had included simulator details covering stall recovery in Alternate Law and high altitude handling/stall recovery. The 46 year-old First Officer, a French national, had 2247 hours flying experience including 1367 hours on type having joined Indonesia Air Asia two years previously immediately after completing his professional licence training at flying school following a lengthy business management career outside the aviation sector.

It was found that neither pilot had received, nor been required to receive by the Indonesian DGCA, upset recovery training on the A320, although the Captain had received such training on the Boeing 737 when he had joined Indonesia Air Asia. The Investigation noted that "the (A320) FCTM stated that the effectiveness of fly-by-wire architecture and the existence of control laws eliminate the need for upset recovery manoeuvres to be trained on protected Airbus".

The convincing evidence from the CVR that CRM on the flight deck had been ineffective was noted, as was the potential effect of both 'startle reflex' and 'spatial disorientation' on the pilots' performance following the sudden and unexpected requirement to fly the aircraft manually.

On the question of the repetitive Rudder Limiter Cautions which had begun the sequence of events which led to the accident, it was noted that "there was no approved means for flight crews to handle multiple or repeated Master Caution alarms in order to reduce distraction". The failure of the continuing airworthiness process to address what was found to have been a significant history of such Cautions occurring in flight was also noted, as was inability of regulatory oversight procedures to detect this. The line maintenance response to each after- flight report of the occurrence was found to have been mainly confined to resetting the component involved - the Rudder Travel Limiter Unit (RTLU) - by either cycling the FAC push button(s) or tripping and re-setting the associated CBs with no concurrent development of organisational awareness of the ongoing nature of the problem.

When the RTLU recovered from the accident aircraft was examined, it was found that the cause of the repeated failures and consequent system Caution annunciations had been cracking solder in both channels which would have led to loss of electrical continuity and thus RTLU failure.

The Investigation formally identified five Contributory Factors in respect of the accident as follows:

A total of 9 Safety Recommendations were made as a result of the Investigation as follows:

The Final Report of the Investigation was initially published on 1 December 2015 and then re-issued with minor changes incorporated.