On 17 August 2016, a Fokker F50 crossed an active runway at Adelaide ahead of an A320 which was about to land after both its pilots and the controller involved had made assumptions about the content of radio transmissions they were aware they had not fully heard. The Investigation found that the A320 crew had responded promptly to the potential conflict by initiating a low go around over the other aircraft and noted that stop bars were not installed at Adelaide. In addition, aircraft taxiing across active runways were not required to obtain their crossing clearances on the runway control frequency.

On 17 August 2016, a Fokker F50 (VH-FKV) being operated by Alliance Airlines on a scheduled passenger flight from Olympic Dam to Adelaide as 'Unity 3201' crossed an active runway in normal day visibility when taxiing at Adelaide after landing, whilst an Airbus A320 (VJ-VGI) being operated by Jetstar Airways was about to touchdown on the same runway. After initially instructing the F50 to 'hold short', the controller responsible for the taxiing F50 realised that this was no longer appropriate and changed the instruction to expedite the crossing. By this time the A320 had already commenced a go around and passed overhead.

An Investigation was carried out by the Australian Transport Safety Bureau (ATSB). It was noted that the F50 was being operated by a second-in command Captain designated as PF occupying the left hand seat with a Check Captain in command and occupying the right hand seat. The nature of the check/training being performed on the F50 and the experience of the four pilots and the controller who was responsible for the F50 as it taxied to its parking gate was not recorded.

It was established that, after landing on runway 12, the F50 had rolled through the intersection with runway 23 (see the illustration below) before turning left onto taxiway D2 and changing from the TWR to the GND frequency. Once the F50 had cleared the runway intersection, the TWR controller had cleared an A320 to take off from runway 23. Once this aircraft was airborne, TWR cleared another A320 which was on approach to runway 23 and about 3nm from touchdown, to land.

As the F50 taxied along D2, the Check Captain in the F50 saw both the departing and approaching A320s but was unable to make an initial contact call to GND because the frequency was continuously in use for other transmissions. He reported that having initially assessed that they should be able to expect a clearance to cross runway 23, the inability to get the call in led him to instead anticipate having to stop at the 23 holding point. As the F50 approached this holding point and the crew were still unable to get a transmission in, the GND controller, who had seen the aircraft taxiing towards runway 23 on D2 transmitted, without a break from their previous transmission "Unity 3201 hold short of runway 23, I’ve got you going to 50 Golf".

The Check Captain of the F50 subsequently advised that the start of the GND controller's transmission appeared to have been missed and that what they had actually heard was "runway 23 and I’ve got you for bay 50 golf". He further stated that "as the instruction included the parking bay", he had assumed that the instruction had been to cross the runway and had therefore read back "cross runway 23 to 50 golf, Unity 3201". The GND controller reported believing that the pilot had read back "short runway 23..." and had assumed that the word ‘hold’ had been ‘clipped’. Both F50 pilots reported that they had "thought they had received a clearance to cross runway 23". 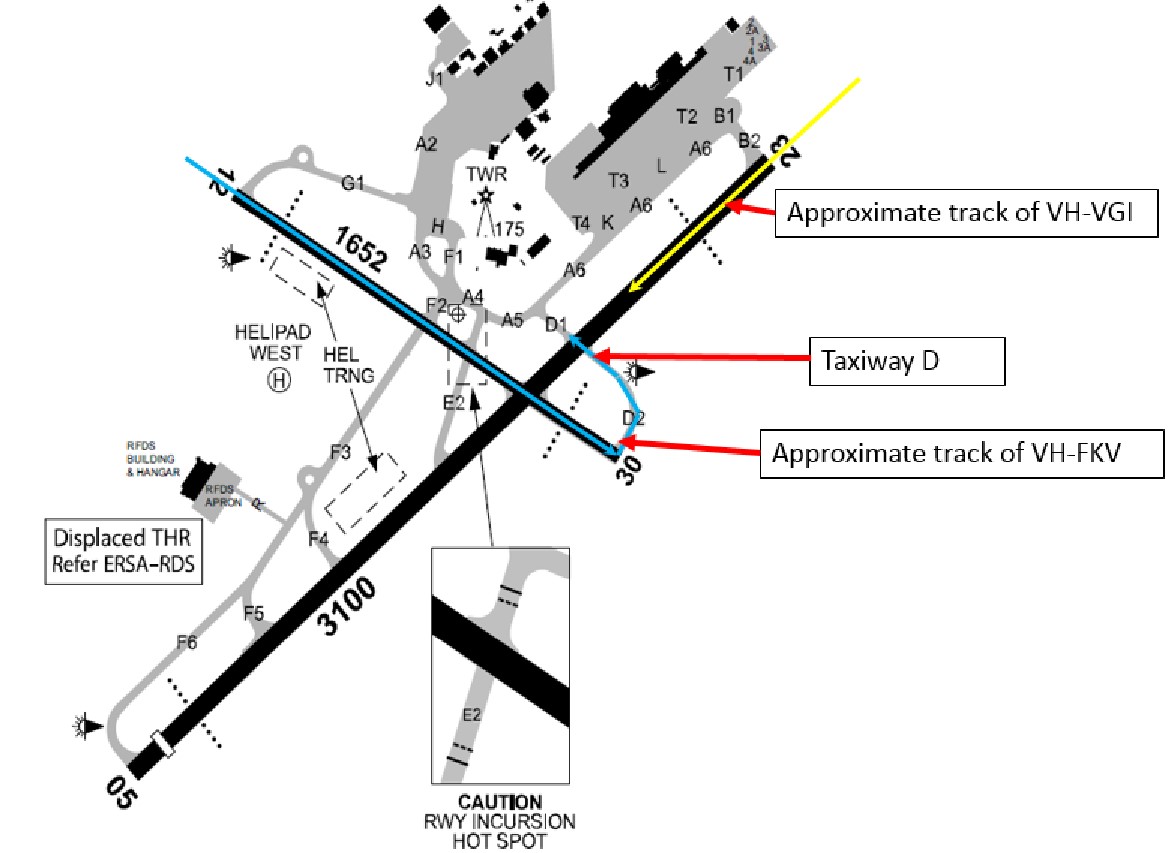 The TWR controller saw the F50 on D2 and heard the GND controller say ‘hold short’, but did not hear the crew readback. They reported having then "scanned runway 23 to check it was still clear for the landing A320, which was then over buildings and less than 30 seconds from touchdown and then commenced a handover of the TWR position to another controller".

The F50 PF then checked to their left, called "clear left" and began to taxi the aircraft across runway 23. The Check Captain then reported having looked to their right, sighted the A320 and concluded that "it was a lot closer than they had expected". The GND controller saw the F50 crossing the holding point and responded with "hold short" and then, having immediately realised that this was not an appropriate instruction, followed it with "Unity expedite expedite Unity". The GND controller saw that the A320 had begun a go-around from a low height and was at about 100 feet above the runway. With the go around already initiated, the TWR controller issued the same instruction. The F50 completed the crossing of runway 23 onto taxiway D1 without its PF seeing the A320, which subsequently made an uneventful second approach to a landing.

The Investigation documented a number of specific points considered to be of potential relevance to the investigated event including:

The Investigation commented that:

It was considered that effective communication serves to minimise the risk of runway incursions and that the investigated event had highlighted the importance of:

The Final Report was published on 22 November 2016. No Safety Recommendations were made.