On 28 November 2020, in uncontrolled Class ‘G’ airspace, an Airbus A320 inbound to and in contact with Ballina and an en-route light aircraft tracking abeam Ballina both listening out on a shared Common Traffic Advisory Frequency (CTAF) did not recollect hearing potentially useful CTAF calls and converged on intersecting tracks with the light aircraft TCAS only selected to Mode ‘A’. The A320 received a TCAS TA but neither aircraft visually acquired the other until the minimum separation of 600 feet with no lateral separation occurred. Changes to the air traffic advisory radio service in the area were subsequently made.

On 28 November 2020, an Airbus A320 (VH-VGP) being operated by Jetstar Airways on a scheduled domestic passenger flight from Melbourne to Ballina and a Jabiru J230 (24-7456) on a private flight from Heck Field to Evans Head and intending to pass abeam Ballina were both descending and on intersecting flight paths in day VMC when they passed within 600 feet vertically with no lateral separation in Class ‘G’ airspace without prior awareness of the other aircraft.

An Investigation was carried out by the Australian Transport Safety Bureau (ATSB). Relevant flight trajectory data was obtained from the A320 QAR and from data stored by the “OzRunways” app installed on the pilot’s Apple device. 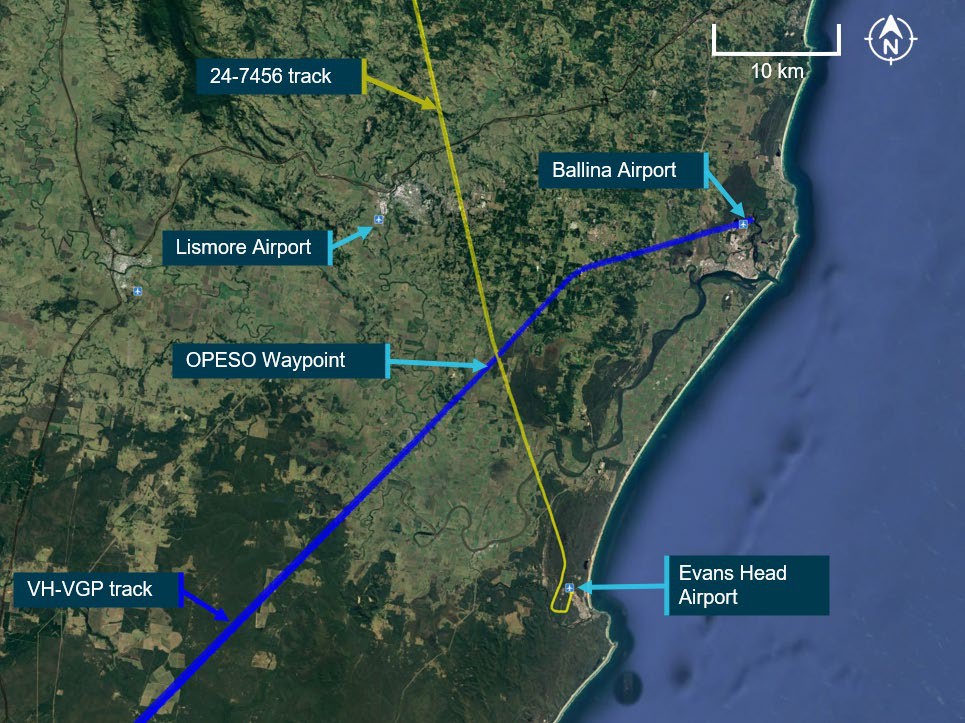 The intersecting north easterly and south south-easterly tracks of the two aircraft. [Reproduced from the Official Report]

When the A320 was approximately 40 nm to the southwest of its destination, a routine position broadcast was made on the shared CTAF which Ballina used. The same frequency was also used by neighbouring airports including, in the vicinity of the investigated traffic conflict, by three smaller aerodromes, Casino, Lisburn and Evans Head - see the illustration below. Ballina was one of the only two Australian airports to also operate a “Certified Air/Ground Radio Service” (CA/GRS) on the CTAF frequency. This additional traffic de-confliction information service was provided only to commercial passenger transport aircraft with over 30 seats and had been introduced 3½ years previously in response to the increasing number of aircraft movements at Ballina.

On receipt of the A320s position broadcast, the Ballina Airport Certified Air/Ground Radio Operator (CA/GRO) “confirmed that the crew were aware of two other passenger flights, another A320 departing to the south from runway 06 at Ballina and a Boeing 737 inbound to Ballina from the south”. At about the same time, the light aircraft tracking south southeast towards its destination made a position broadcast on the shared CTAF addressed to Lismore, advising that it was 4 nm to the east of Lismore and descending through 5,300 feet. Neither aircraft heard the call of the other although they were already maintaining ground tracks which would intersect and were both descending towards their intended destinations (refer again to the previous illustration).

The four locations in the area all sharing the same CTAF frequency. [Reproduced from the Official Report]

The potentially conflicting light aircraft appeared on the A320 TCAS traffic display but without an altitude indication. Both pilots reported having attempted, without success, to visually acquire the proximate traffic in the absence of any cloud and in excellent visibility but they did not attempt to contact the traffic on the CTAF.

Twenty three seconds prior to the aircraft crossing, a TCAS TA was generated and the crew continued their whilst maintaining their track. Three seconds prior to minimum separation between the two aircraft, the A320 advised the Bellina CA/GRO and the inbound 737 in their vicinity that they had just passed waypoint OPESO. The light aircraft pilot did not recall hearing this broadcast.

Recorded flight data for both aircraft indicated that almost immediately after this transmission had been completed, the two aircraft had crossed in a position 12 nm south west of Ballina with the A320 beneath the light aircraft as illustrated on the illustration below. 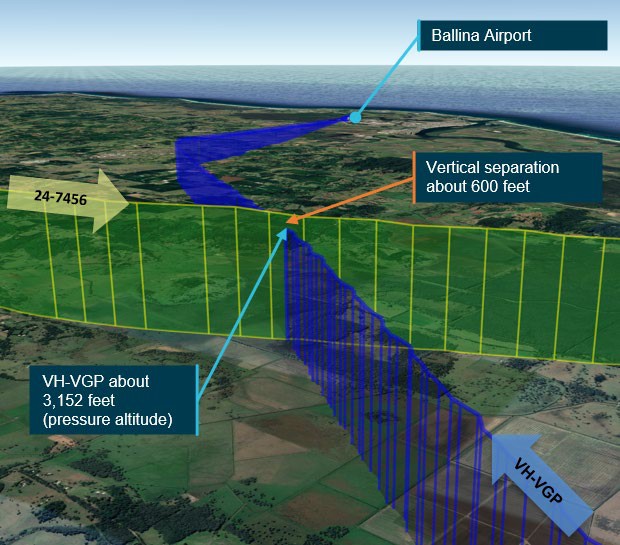 A reconstruction of the near miss flight paths. [Reproduced from the Official Report]

The A320 crew reported having finally sighted the light aircraft immediately before assessing beneath it and the pilot of the light aircraft reported only sighting the A320 shortly after passing above it. The pilots in both aircraft did not observe any lateral separation as the crossing occurred.

The Investigation made a ‘Safety Analysis’ of the assembled evidence and concluded that the need for the pilots of both aircraft when operating in Class ‘G’ airspace to make full use of the available CTAF and, in the case the light aircraft pilot, to also ensure Mode ‘C’ TCAS was selected had not been recognised.

It was noted that after receiving a TCAS TA, the A320 crew had not made a CTAF broadcast in the interests of collision avoidance. The separation ultimately achieved was “entirely fortuitous”.

Since the facilitating factor in the conflict was the absence of air traffic control or provision of a centrally controlled traffic information service, the consequence of the airspace being classified as uncontrolled, the implications of this were considered.

A review of past events was found to indicate that self-separation using broadcast traffic advice had (in general) been a largely reliable procedure despite relying on individual pilots both recognising a potentially unsafe situation and, when necessary, formulating an effective separation plan which “often requires coordination with the pilot(s) of the other involved aircraft”. However, in the absence of any possibility of coordinated TCAS RAs, it was noted that “this process is almost exclusively reliant on individual human actions without other mechanisms potentially acting as a safeguard and/or safety redundancy” and consequentially vulnerable to human error by pilots regardless of their experience.

It was considered significant that not only is the airspace around Ballina Airport used on a regular basis by “a complex mix of aircraft types and operations, including high capacity passenger transport” it is also near to several other uncontrolled airports. Given that context, whilst it was not considered that the factual findings of the Investigation indicated that present arrangements constituted an “unsafe system”, it was concluded that there was potentially an opportunity to further reduce the risk of traffic conflict.

It was considered that relevant safety improvement might be achievable by the increased use of controlled airspace and by more use of ADS-B data both by ATS and individual aircraft. In addition, improved monitoring of air traffic movements may be able to assist in the identification of areas of increasing risk.

Four Contributing Factors to the investigated conflict were identified as follows:

An Additional Factor that increased risk was also identified as:

Safety Action taken prior to the completion of the Investigation was noted as having included the following:

The Final Report was released on 25 March 2022. No Safety Recommendations were made.