On 12 November 2018, an Airbus A320 took off from Macau in good daylight visibility whilst a same-direction runway inspection was in progress but became airborne well before reaching it. The conflict was not recognised until an aural conflict alert was activated, at which point the ATC Assistant took the microphone and instructed the vehicle to clear the runway. The Investigation found that the TWR Controller had forgotten that the vehicle was still on the runway until alerted by the audible alarm and had not checked either the flight progress board or the surface radar before issuing the takeoff clearance.

On 12 November 2018, the crew of an Airbus A320-200 (HS-BBO) being operated by Thai AirAsia on a scheduled international passenger flight from Macau to Bangkok as FD 763 commenced its takeoff from Macau in day VMC unaware that a vehicle was also on the runway. The conflict was detected by the TWR ATC Assistant who instructed the vehicle to clear the runway and it did so before the A320 reached its position.

An Investigation was carried out by the Macau Civil Aviation Authority (AACM). Relevant ATC recorded radar and communications data and weather data were available.

It was established that a follow-me vehicle had been cleared from the apron to the holding point for runway 34 on taxiway C3 via taxiways C1 and C2 and then subsequently cleared by the ATC Assistant after approval from the TWR Controller to enter the runway and commence an inspection of the 3,300 metre-long runway in use from that position. Ten minutes after issuing the clearance for the vehicle to leave the apron, the departing A320, having been similarly cleared from the apron to the same holding point in turn, was then cleared to take off by the TWR controller. At this time, the inspection vehicle was passing abeam the Fire Station (see its location on the illustration below). 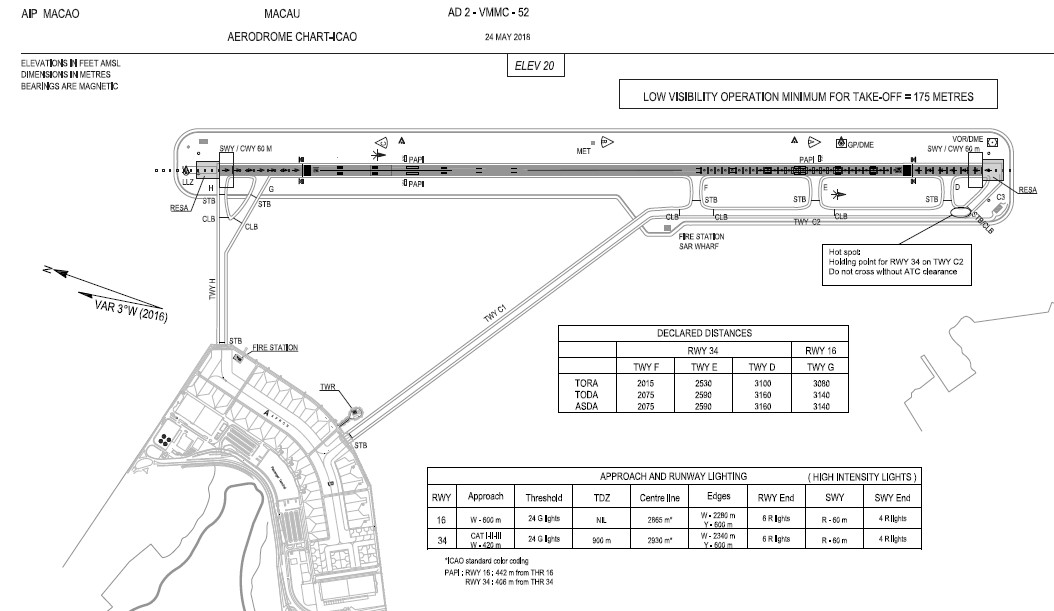 The movement area at Macau. [Reproduced from the Official Report]

At this point, the positions of the follow-me vehicle and the aircraft were as shown in the first of the recorded radar pictures below with the aircraft still on taxiway C2 and passing taxiway E. Three minutes later, the aircraft became airborne six minutes ahead of the end of its departure slot a little beyond the mid-point of the runway, as shown in the second of the recorded radar pictures below. By this time, the runway inspection, being carried out in the direction of runway operational use, was almost complete and the closest the aircraft came to the vehicle ahead of it whilst on the ground was determined to have been 1,480 metres. The audible conflict alarm triggered by SMR data activated only shortly before this minimum, with the vehicle just past the runway 16 displaced threshold.

The vehicle and aircraft positions when the takeoff clearance was issued. [Reproduced from the Official Report] 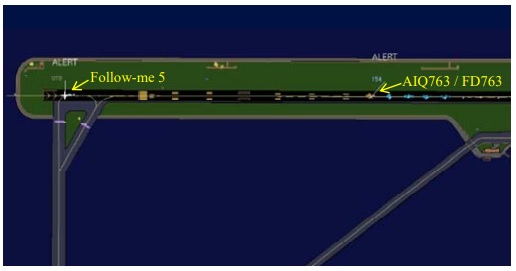 The closest on-runway distance between the vehicle and the aircraft. [Reproduced from the Official Report]

Immediately on hearing the alarm, the TWR ATC Assistant took the microphone and instructed the vehicle to vacate the runway immediately and its driver subsequently reported clear of the runway some 20 seconds later. The ATC Supervisor heard the audible alarm and having approached the TWR Controller’s working position, reported having seen the aircraft getting airborne “at about mid runway”. He noticed that the FPS sequence showed that the runway was occupied by a vehicle but had not been sure where it was at that time. The TWR Controller then told the Supervisor that she had forgotten that the vehicle was still on the runway until alerted by the audible alarm and also that she did not check either the flight progress board or the SMR display before issuing the takeoff clearance. She continued in position for a further 27 minutes until relieved.

It was noted that when the inspection vehicle had been cleared to enter the runway by the ATC Assistant, the corresponding flight progress strip had been passed to the TWR Controller who had placed it on the flight progress board as required to indicate that the runway was occupied. The amber alert tag attached to the vehicle once it had entered the runway was shown on the SMR.

The Investigation noted the TWR Controller considered the prevailing traffic volume and complexity at the time of the event had been light and the ATC supervisor considered that the traffic volume had been light to moderate and complexity very light. All three personnel present in the TWR “claimed that there was no distraction during incident”. No evidence that rostering or fatigue issues or any lack of medical or emotional fitness to work had played any part in the TWR Controller’s error was found and she personally stated during interview that “she was not distracted during the occurrence”. However, she did state that at the time “she was planning a training helicopter flight request […] back to Macao and was also thinking about the training she would deliver to [a] vehicle driver the following day”. She also confirmed that visibility from the TWR cabin was good and unobstructed and it was noted that the distance from the TWR cabin to the position of the Fire Station was approximately 2000 metres.

It was found that although the SMR was in service, it had been out of service for seven months prior to return to service 12 days prior to the investigated event and was being “monitored” by maintenance personnel. It was noted that although the system had generated the first visual amber alert on the display when the vehicle passed the holding point on taxiway C2, instead of this alert moving with the vehicle, it stayed in the initial position and another visual amber Alert was attached to the moving vehicle. However, it was considered that this had not constituted any impediment to the TWR Controller’s situational awareness in relation to the vehicle.

The formally documented Findings of the Investigation included, but were not limited to the following: