On 7 September 2018, an Airbus A320 was inadvertently landed on an under- construction runway at Malé in daylight VMC but met no significant obstructions and sustained only minor damage. The Investigation attributed the error to confusion generated by a combination of pilot inattention to clearly relevant notification, controller distraction, the failure of the airport operator to follow required procedures and the failure of the safety regulator to ensure that sufficient arrangements to ensure safety were in place and complied with.

On 7 September 2018, an Airbus A320 (VT-EXL) being operated by Air India on a scheduled international passenger flight from Trivandrum to Malé as AIC263 landed at destination in day VMC on a runway still under construction. No significant obstacles were encountered and the aircraft sustained only minor tyre damage.

The aircraft after a large piece of white cloth had become jammed in the landing gear. [Reproduced from the Official Report]

An Investigation was carried out by the Accident Investigation Coordinating Committee (AAIC) of the Maldives Civil Aviation Authority which functions in accordance with the principles of ICAO Annex 13. Relevant data was downloaded from the aircraft CVR.

It was found that the despatch briefing prior to departure from Trivandrum had been “done remotely” although the pilots had been given all the documents and were aware that they “were supposed to study them”. The First Officer stated subsequently that she had been aware of a NOTAM about the closed runway but had not mentioned this to the Captain. This NOTAM read “CONST OF NEW RWY IN PROGRESS. NEW RWY E AND PARALLEL TO CURRENT ACTIVE RWY. ACTIVE RWY EDGE LGT ON DAY AND NIGHT. ALL OPR TO EXER CTN. REFER AIC 04/17”. The AIC referred to was issued on 20 July 2017 and provided a comprehensive overview of the construction project supported by the illustration reproduced below. No evidence was documented to indicate that the edge lights of the runway in use had actually been on.

The flight proceeded normally and after transfer to Malé Radar, the crew had requested a VOR approach to runway 18 and been advised that they could expect this request to be granted by Malé APP once transferred. That transfer occurred and at 10,000 feet QNH, the flight was cleared to continue descent but instructed to reduce to minimum speed as it was number 2 to land. Passing 4000 feet QNH, the flight was transferred to Malé TWR and after checking in was cleared for a VOR approach to runway 18 and asked to call on a seven mile final. Subsequently, landing clearance was issued before the aircraft reached seven miles with an instruction to vacate the runway after landing via taxiway ‘B’. 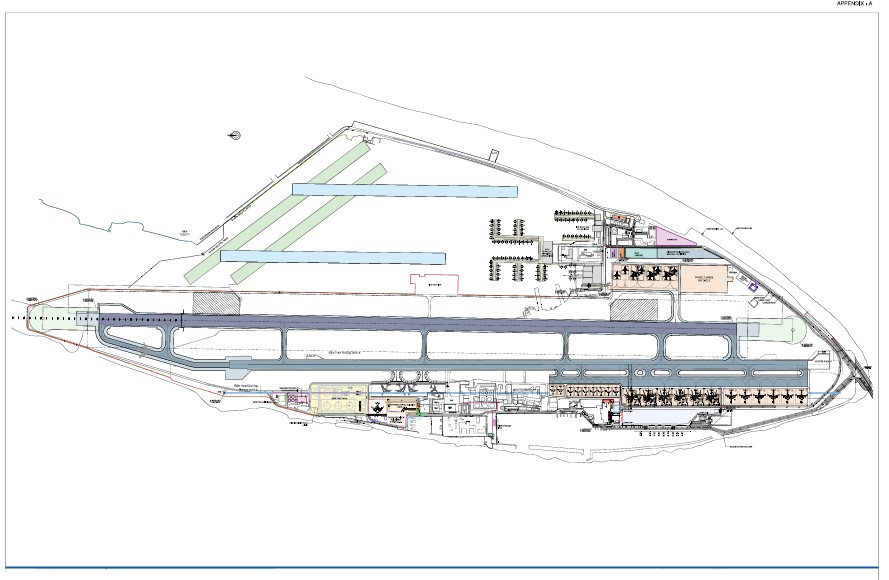 The AIC illustration showing the planned new runway east of the existing one. [Reproduced from the Official Report]

Approximately three minutes after landing clearance was issued, the Malé TWR controller reported that he had noticed that the aircraft had landed on the runway that was under construction, located about 150 metres to the east of runway 18 and had transmitted “you just landed on the wrong runway”. Both pilots subsequently stated that they had not been aware that they had lined up with wrong runway until they were about to land.

According to the Captain, as they were on final approach, they could see “very bright and clear” runway markings and that he had not seen the “old” and its markings “were not conspicuous as those on the new runway”. He stated that “he never thought that they were aligned towards to the wrong runway” and that although he saw “cross markings” on the runway when the aircraft speed was around 100 knots, this was after a normal touchdown and at about the same time as the aircraft had passed over a large piece of white cloth at which point he felt “a slight bump”. Immediately after this, TWR called and said they had landed on the wrong runway and so once the aircraft had come to stop, he had shut down the engines and said to the First Officer that “the left main wheel was stuck with something”. Subsequently an engineer inspected the aircraft and informed him that one of the left wheels was damaged.

He noted that the charts available to him showed only one runway and that prior to the flight, he had been unaware of any NOTAMS relating to the construction of a new runway or the AIC which had been issued on 20 July 2017 to announce the beginning of the work pending the issue of an AIP Supplement. He said that he had flown into Malé on four or five previous occasions, most recently 3/4 months ago but had never landed on runway 18.

The First Officer stated that she had noticed that ‘18’ was not marked on the runway they were approaching but that the displaced threshold markings were clear. She did admit to wondering whether it was closed or open but stated that she had “not seen the other runway at all”. She was informed by the Commander that the left main wheel was “stuck with something” and later they were informed by an engineer that the wheel was damaged. She stated that she had flown into Malé on two or three previous occasions, most recently around 4 months ago and that one of these visits had involved a landing on runway 18.

The TWR Controller subsequently stated that it was not possible to see whether the aircraft was approaching the runway in use or the runway under construction and only recognised the error as it touched down. He stated that “he could have called for a go around had he seen it a little earlier”. The Investigation concluded that TWR personnel had allowed themselves to be “completely distracted” at the time the A320 had been on final approach.

It was noted that the weather conditions were benign and that the runway 18 PAPI had been on. The separation between the 45 metre-wide runway in use and the 60 metre wide runway under construction, which were “nearly parallel” was 190 metres with the new runway to the east of the existing one. It was also noted that “for an aircraft approaching runway 18, the threshold markings of the runway under construction were closer than those of the runway in use”.

It was considered that the CAA “had not given due attention to ensuring compliance with the safety standards and markings of the runway under construction in accordance with the Aerodrome Rules detailed in MCAR-139" (which were in line with ICAO Annex14) and that had they done so, it “could have removed any confusion created amongst pilots operating into the airport”. It was also observed that Air Safety Circular (ASC) 139-5 included some specific requirements on “visual aids to denote closed runways and taxiways or parts thereof” but that despite this, the ‘closed runway’ markings on the runway under construction were not fully in compliance with these requirements and in particular “the runway markings were not fully obliterated”.

The Cause of the Serious Incident determined was found to be “confusion between the runway in use and the runway under construction”.

Although not formally documented as such, a Contributory Factor was found to be the fact that “Male’ Aerodrome Control personnel on duty in the Tower were seen to be completely distracted when the flight landed on the runway under construction”.

Seven Safety Recommendations were made as a result of the Investigation as follows:

The Final Report of the Investigation was completed on 28 August 2019.