On 25 February 2010, an Aeroflot Airbus A320-200 unintentionally made a daylight take off from Oslo in good visibility from the taxiway parallel to the runway for which take off clearance had been given. Because of the available distance and the absence of obstructions, the take off was otherwise uneventful. The Investigation identified contributory factors attributable to the airline, the airport and the ANSP.

On 25 February 2010, an Airbus A320-200 being operated by Aeroflot on a scheduled passenger flight from Oslo to Moscow Sheremetyevo successfully took off in normal daylight visibility from an unobstructed taxiway parallel to the designated departure runway 01L. The flight was a line training sector for the First Officer and a Safety Pilot was occupying the flight deck observer seat. The flight crew reported that they had not appreciated that they had taken off from the taxiway until informed of this by ATC after take-off.

An Investigation was carried out by AIBN. The diagram below shows the position from which the incident aircraft taxied ( a solid red triangle) via taxiways ‘G’ and ‘N’ for departure from Runway 01L at A3 and the orange line indicates where the aircraft took off northbound on taxiway M after receiving take off clearance for Runway 01L whilst taxiing. 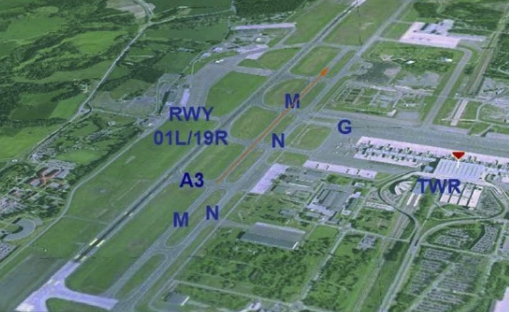 Reproduced from the AIBN Report

It was found that the aircraft commander was a Training Captain and had acted as PF for the departure. He was acting as the supervising instructor for the First Officer who was undergoing line training on the aircraft type. During the taxi out, it was found that only the PF, who had the Jeppesen aerodrome plate in his view, was directing his main focus out of the window. There was no monitoring of the actions of the PF whilst taxiing as neither of other two pilots “(paid) much attention to what was outside the cockpit windows”. The First Officer was ‘head down’ and the Safety Pilot was observing how the First Officer handled his tasks in accordance with his responsibilities. The 23 metre width of the taxiway, compared with the runway width of 45 metres, did not alert the PF to the taxiway line up.

It was established that the taxiway used for take off, taxiway ‘M’, had an available length of 1652 metres from the point where the take off roll was commenced compared to 2696 metres from the equivalent point on the parallel runway which should have been used. Under the prevailing conditions, taxiway M was, by chance, long enough for the aircraft to take off with an actual take off roll of 1245 metres subsequently calculated before the main wheels lifted off the ground leaving another 407 metres before the end of the taxiway. There were also, fortuitously, no other traffic or obstacles of any other description on taxiway ‘M’ at the time.

Of significance to the event was the fact that Norway had a surface markings policy contrary to ICAO SARPs in that markings on both taxiways and runways are yellow. Although the Norwegian CAA had reviewed this exceptional policy after an AIBN Safety Recommendation to that effect following a similar previous event at Oslo, it had decided that it was not necessary to change it.

In respect of the ATC circumstances, it was noted that the event took place during a quiet time of the day with little traffic and that the use of intersection take offs at the airport was common if conditions were suitable. On a point of detail, it was noted that “the phraseology used for one taxi instruction was not in line with the ICAO standards” but that radio communications between the aircraft and ATC were otherwise normal. The issue of an early unrestricted take off clearance when quiet was confirmed as normal and permitted practice.

A plan by the Airport Authority to add a hot spot to the aerodrome chart in the area of taxiways N and M in the vicinity of intersection access A3 where previous taxiing errors had occurred was noted but it had not been actioned by the time of the investigated event. It was also found that there had been no corresponding improvement of signs in the proposed ‘hot spot’ area and that it was not clear from the signs on taxiway N for intersection A3 that taxiway M was between taxiway N and holding position in A3. The missing direction signs to taxiway ‘M’ were considered to have contributed to the aircraft commander's taxiing mistake as was the absence of a position sign on taxiway ‘M’ identifying it as such which might have alerted the flight crew to the fact that they were not on the runway.

It was noted that the controller had not monitored the movement of the aircraft in response to clearance even though workload would have permitted this and that this contributed to the taxiway take-off not being discovered in time. In addition, Aeroflot was found to have no documented SOPs which required the flight crew to positively confirm their location before line up and take off.

The Investigation concluded that “deficient procedures and insufficient alertness in the cockpit, in combination with insufficient monitoring from the control tower and insufficient signposting in the manoeuvring area” led to the occurrence which was also possible because “Aeroflot Russian Airlines had no procedures documented in current SOP to confirm their location before takeoff”.

As a result of the Investigation, the AIBN made one Safety Recommendation:

It also noted that two others would have been made had not action already been taken to address issues identified In the Investigation which had been the subject of previous AIBN Safety Recommendations. These two issues were: